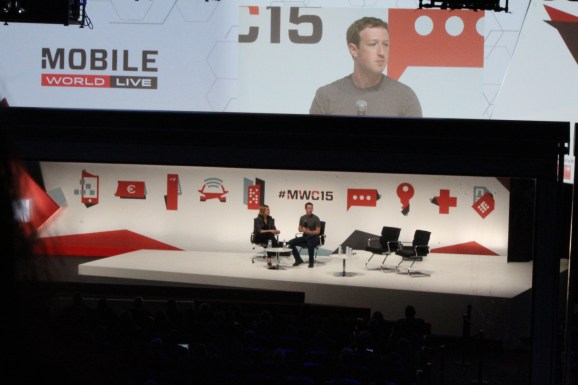 Speaking on stage at Mobile World Congress in Barcelona Monday, Facebook CEO Mark Zuckerberg spoke passionately about bringing Internet connectivity to as many people in the world as possible. But he and executives from several mobile carriers also said that giving people in developing nations free access to the Internet can be a big driver of business over time.

Zuckerberg has been on a world tour of sorts over the past few months promoting Internet.org, the company’s initiative to connect people in developing nations. He has visited Colombia and India, and the company also now offers the service, in cooperation with regional mobile operators, in Zambia, Tanzania, Kenya, and Ghana, as well as India and Colombia.

Zuckerberg began his talk by touting how Internet access — in conjunction with Facebook’s service — helps people connect with friends and family, and share with each other, as well as open up business opportunities between companies and customers. It also can give people access to health information and give them ways to access new jobs.

He said that to date, Internet.org has helped its mobile operators grow their subscriber bases. And that’s vital, he said, because “the only way we can accelerate (Internet.org) is if we can grow the operators’ business.”

Asked if Facebook would like to work with Google on Internet.org in the future, he said that the service launched with Google search in Zambia.

He also noted that while many in the media want to write about connectivity experiments Facebook and Google are doing — drones and balloons — “that’s the fringe of the real work going on. Ninety percent of the world already live within range of a network.”

Among other stats about Internet.org shared today: More than 500 million new people now have access to Internet-based tools; Almost 7 million people used mobile data for the first time; and operators in Internet.org countries have seen acquisition rates for new customers increase by 40 percent.

On stage with operators

Zuckerberg was joined on stage in Barcelona by Jon Fredrik Baksaas, the chairman of GSMA and president and CEO of Telenor, as well as Christian De Faria, the CEO of Airtel Africa, and Mario Zanotti, the senior vice president of operations for Millicom. Their conversation focused on ways that Internet.org has been good for the carriers’ bottom lines as more and more people have begun using data and mobile services for the first time — and started to see the value to their lives.

Internet.org and Facebook can be great for the mobile operators, Zuckerberg said. That’s because Facebook drives data usage, and people understanding for the first time that they want Internet connectivity will also drive usage of mobile networks.

There’s a lot of people who didn’t grow up with the Internet, he said. “If you ask them they want a data plan, you first have to explain why they want to be on the Internet. So that’s why we’re offering free services.”

Doing that, he said, gives people the tools they need to be online. And that, in turn, will be good for mobile carriers.

In Paraguay, it seems to be working. There, according to Zanotti, there’s been a 30 percent increase in data use, and more people are now paying for mobile services. And that was the goal, Zanotti said: “The free model [of Internet.org] is for a limited time. After that, people become paying subscribers.”

From Zuckerberg’s perspective, Facebook is looking to create a model that is profitable for operators to keep in perpetuity. “The more people that are upgrading to paid data … then we will continue using free services. As long as that’s true … [it] will make sense to keep the [Internet.org] experience going long term.”

Facebook, by bringing people a flood of new kinds of information via users’ News Feed, is giving new Internet users a rationale for why they may eventually want to pay for a data plan.

And while Zuckerberg noted that Facebook is often “conflated” with Internet.org, the two are not one and the same. Rather, Internet.org couldn’t exist without the participation of mobile carriers and those companies being willing to invest signficant amounts of money in the infrastructure that brings new connectivity to communities.

But hopefully, Zuckerberg added, over time, those companies will reap the rewards for their efforts and will make more money.