Today is a big day for Google Play game developers. At least, that’s Google’s pitch, as it raises the curtain on a number of new features designed to boost confidence in the Google Play Games platform.

This is a key move in the mobile gaming market — a business that could hit over $30 billion this year, cites research firm Newzoo — and could help boost spending on the Android platform, which lags behind iOS when it comes to gaming revenue.

Let’s dive right into the news — then we’ll circle back on why Google cares about this stuff so much.

First up we have Google’s new player-analytics features, which will enable game developers to “understand player behavior and monitor key game business metrics … in the next few weeks,” Hartrell tells us. These tools will help game studios understand “where their players are progressing in the game … and access critical game metrics like average revenue per user and sessions per user,” Hartrell said.

AdMob, the mobile ad network that Google acquired for $750 million in 2009, will receive a handful of new features today (some in beta).

On the native ads front, some Google Play game developers can now test a format already offered to Android app developers. “Google has traditionally created ads that show up in a custom form that matches the form and function of the experience, and so games will follow suit, where participating developers will be able to show ads that fit the form and function of the game,” Hartrell said. Atari, for example, is testing the new native ads in beta. 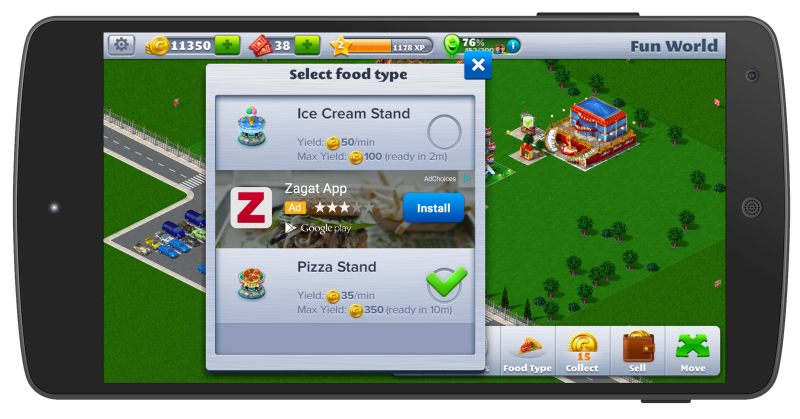 Above: An Atari native ad in action

Next up for ad-supported game devs, Google is releasing “In-App Purchase House Ads” in beta. The AdMob-powered feature will enable game developers to strategically serve up ads for in-app purchases to users who are “more likely to spend on in-app purchases,” Google said on its blog. The house ads feature should roll out “in the next few weeks,” Google says.

Lastly, Google is announcing audience builder, a tool which “enables developers to create lists of audiences, powered by Google analytics,” says Hartrell — “this is a great way to target those users and ultimately grow your revenue as a game developer.”

A second-screen API for Android TV: Nearby Connections

This last bit should interest gamers and developers. “Our goal is to make gaming even more compelling and dynamic through Android,” Hartrell tells us, “and so we’re launching a new protocol called Nearby Connections.” And no, it’s not a hyper-local dating API.

The tool will eventually enable developers to offer a completely seamless second-screen experience. Imagine you’re playing a game on your Android TV and a friend comes over. This API could allow your friend to whip out their Android phone or tablet and start playing along, without installing a random plugin or sitting through an awkward sync process.

After trailing behind iOS for a number of years, it looks like Android game developers are finally making good money on Android across the board. Last week, Google announced that it paid out over $7 billion to app developers last year. Google unfortunately declined to share how much of that cash went to those making games, but it’s practical to bet that a good chunk of it did, considering how often games lead the pack on revenue.

Google Play reaches more than a billion people now on Android devices globally — in addition to that, three in every four Android users continue to play games, and this is really just an unprecedented audience of players.

Ultimately, these features should encourage game developers to focus on Android, which could win over more gamers in the long run. This all satisfies Google’s larger goal: to put Android in more hands and on more devices.