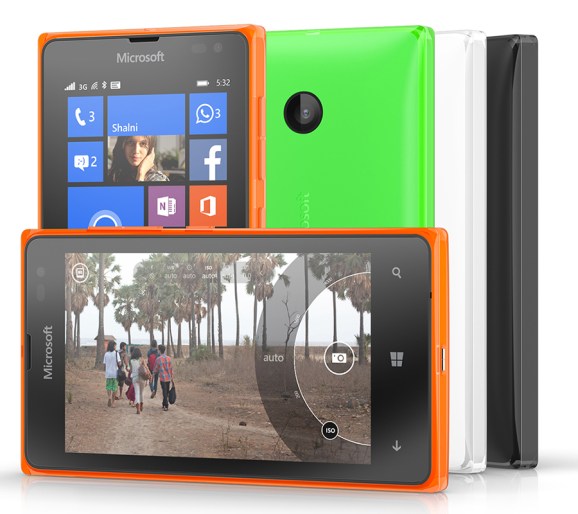 BARCELONA, Spain — After two years of trying to reboot its mobile efforts, there’s no real way to spin Microsoft’s current position. The latest numbers show that Google’s Android and Apple’s iOS control 96.3 percent of the market.

Game over, right? Well, at the Mobile World Congress in Barcelona this week, Microsoft remains as convinced as ever that it can claw its way back into relevancy. The company unveiled the new Lumia 640 and Lumia 640 XL today.

Rather than unveiling new flagship phones at MWC, Microsoft decided to wait to show off new high-end phones when Windows 10 lands later this year.

Instead, the new Lumias are aimed at first-time smartphone buyers and emerging markets. And in many ways, Microsoft believes these two targets are more critical to its comeback efforts than seducing gadget geeks with high-end phones. (Though it wants to do that, also.)

In an interview at MWC, Chris Weber, Microsoft’s corporate vice president of mobile device sales, said the company believes one of its biggest opportunities at the moment is going after Android users.

Weber said Microsoft’s research indicates users of Android, which powers many of the low-cost smartphones in emerging markets, are far less loyal than Apple users. The complaints Microsoft says it hears are many of the same ones that Apple likes to point out. Devices are widely fragmented between different versions of Android. Apps work better on some versions of Android, and some form factors, than others. And then there are security issues.

The first step in attacking those markets and Android phones is cost. The new phones will be priced around $155 for the Lumia 640 and $211 for the Lumia 640 XL. Weber said the cost for the phablet is roughly one-third less than the previous version.

Weber notes that a lot of the engineering and design of the new phones are aimed at retaining performance, and increasing it where possible, while driving down costs. It also helps, he said, that the company still manufactures many of its own devices.

“We need to continue to push price points even lower,” he said. “But it’s not so we can say we have the lowest prices. I want to position us as the best value. These are still no-compromise devices.”

Increasing that sense of value is why Microsoft also said the new phones would come with one-year subscriptions to Office 365 Personal, its suite of productivity applications; 1TB of OneDrive storage for free; and 60 free minutes of Skype calling.

Weber also said that Windows 10 will provide a boost. Windows 10 promises to deliver a common set of APIs that will let developers write apps that run across all Windows devices and screen sizes. The new Lumia phones will be eligible for a free upgrade to Windows 10.

If that strategy takes hold, Weber believes the company can start to build a critical mass of devices and users, and that will in turn continue to make the Windows 10 platform more attractive to developers. And, of course, Microsoft would be more than happy to persuade some of these new users to upgrade to those pricier flagship phones eventually.

Weber, as you’d expect, remains optimistic that Microsoft’s mobile story is about to get a another fresh start.

“Sure, I see these marketshare numbers,” he said. “And all I see is opportunity.”