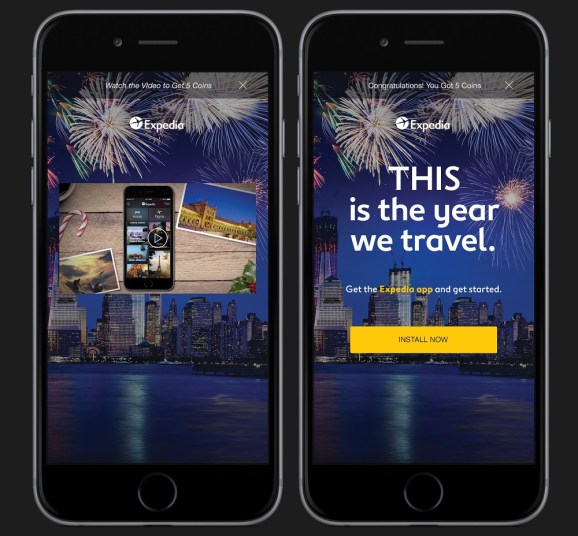 Continuing its drive to be a one-stop shop for mobile app makers, mobile monetization firm Tapjoy is announcing what it calls its “complete marketing automation and monetization platform” to predict the value of every free-to-play user and take the appropriate action to make them happy.

The new platform, announced in time for the Game Developers Conference in San Francisco, is designed to figure out and optimize the lifetime value of every freemium app user. It combines predictive analytics, marketing automation tools, in-app purchase promotions, and Tapjoy’s traditional rewarded ads in a single tool that drives both revenue and engagement for developers, said Steve Wadsworth, chief executive of Tapjoy, in an interview with GamesBeat.

The new platform is based on predictive analytics and marketing automation technology that Tapjoy acquired last August with its purchase of South Korea’s 5Rocks. That acquisition helped Tapjoy cover more of the market than it otherwise could with its monetization offerings, which include offers of rewards for people who watch an ad in a mobile game.

“We know that advertising is great,” Wadsworth said. “But we know we must come up with a solution that maximizes the value of every user for freemium mobie app developers.”

Tapjoy is already one of the big mobile monetization companies. Its software development kit is embedded in more than 270,000 apps with a global reach of more than 520 million monthly active users as of December 2014.

Roughly 5 percent of users in a game purchase items through in-app purchases in free-to-play games. But 95 percent don’t pay, and it’s hard to monetize them.

“The solution we are rolling out does just that,” Wadsworth said. “We layer things so the publisher moves from analytics to marketing automation actions and segmentation.”

The new platform introduces Tapjoy’s Future Value Map, which uses data science, segmentation, and proprietary algorithms to predict the future behaviors of individual users. It then determines whether an in-app promotion, advertising offer, or engagement message will have the most impact on each user. The platform lets developers created automated campaigns that deliver targeted messages to each class of users at the right moment, said Peter Dille, chief marketing officer at Tapjoy.

“No one else has the Future Value Map that segments users into different cohorts that publishers can take action against,” Wadsworth said.

The key is getting analytics that allow a developer to predict what will happen with a user and then take action. The marketing automation tools can then have the appropriate context to send the right messages to keep spenders engaged or to send rewarded ads to users who will never spend.

“We have good algorithms to predict what a user’s future is,” Wadsworth said. “We combine that with marketing automation tools that take the right action for every user. That ultimately drives real-time in-app purchases and ad-based monetization from a single data set.”

Wadsworth said that, with Tapjoy, developers no longer need to integrate a variety of single point solutions and can focus on one software development kit for all of their analytics, marketing automation and ad-monetization needs.

In a demo, Jeff Drobick, head of product at Tapjoy, showed how the calculations for various metrics change in real-time as the data segmentation changes for the groups of users. He showed that you can identify low-value users or high-value users, territorial differences among users, payers, non-payers, and non-payers who might one day become payers. 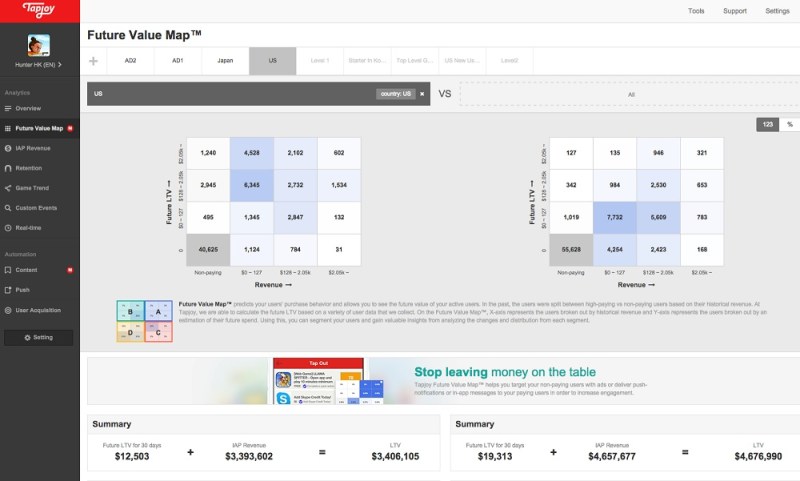 “We are very excited about Tapjoy’s newly integrated product, especially the new analytic features and marketing automation tools,” said Domin Yoon, product manager at NeoGames, in a statement. “The Future Value Map gives us a clear picture of our users’ lifetime value potential, and allows us to conduct effective marketing campaigns using this segmentation. We also look forward to increasing our monetization through the variety of content and messaging tools offered in the new Tapjoy platform.”

Wadsworth said the team has spent months getting ready for the launch, and it has been in beta testing since the end of last year. Customers are starting to implement the platform.