SAN FRANCISCO — If you’re working on a mobile game right now, you might want to look away.

Hundreds of new games come out every day on the Apple App Store and Google Play. In 2014, about 500 new iOS games and 250 Android games appeared in their respective stores every 24 hours. The staggering numbers underscore the difficult situation that independent developers — who don’t have the marketing muscle of a major publisher to wade through the digital flood — face when releasing their titles for smartphones.

“Of course, a lot of those [games] will never get noticed, so it’s not like you’re really competing with all [of them],” said Mike Rose, a talent recruiter for SpeedRunners developer TinyBuild. Still, he added, this doesn’t change the fact that developers need to do a lot of legwork just to bring some attention to their games.

The data comes from Rose’s extensive research into indie game sales on PlayStation 4, Xbox One, Wii U, 3DS, PC, iOS, and Android — with mobile being the most volatile of them all. He scoured the Internet for postmortem stories and emailed around 100 different indie developers for their insight before presenting his findings at a talk during this year’s Game Developers Conference.

Since free-to-play sales are harder to quantify, the figures (in the picture below) only reflect paid games. 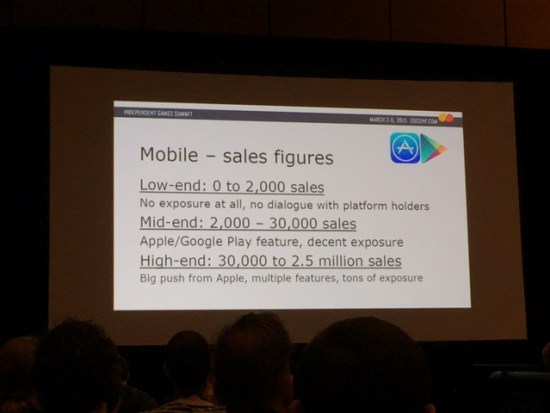 According to Rose, the low-end of the scale comes from developers who had little to no marketing and whose discussions with Google or Apple (for possible storefront promotions) “didn’t get anywhere.” The middle tier benefited from some exposure on the App Store and Google Play as well as from the press and fan discussions on forums. Getting featured on those stores is tough: Apple and Google only promote a handful of games per week.

The coveted 30,000 to 2.5 million sales range are for the rare few that had a ton of exposure or a lot of help from Apple, like when it uses games in commercials or press conferences to help sell more iPhones and iPads.

“You can probably count the number of giant successes on mobile on two hands just from the last year,” said Rose.

He offered a few suggestions for those looking to increase their potential sales: Developers should start talking to Apple and Google early on in development, they should pay constant attention to their games with updates and new downloadable content, and games should launch at a price that leaves room for discounts or price drops in the future.

Though the market looks bleak, the massive audience on mobile (800 million with iOS devices alone) means the struggle might be worth it if developers can figure out how to climb up the top-grossing charts.

“Mobile is super risky, as I’m sure you all know,” Rose said during his concluding remarks. “But it can give you big success if you manage to tick a lot of boxes and get a little bit lucky.”