BARCELONA, Spain — BlackBerry has lifted the lid on its next smartphone at Mobile World Congress (MWC) in Barcelona today: the BlackBerry HD Leap, a touchscreen-enabled 4G LTE device.

After a year where BlackBerry put most of its eggs in the physical QWERTY keyboard basket, today’s news sees BlackBerry return to the touchscreen realm. The company says the device is aimed at “career builders and companies who value security and privacy when pushing their productivity to the next level,” so it’s clear BlackBerry is still chiefly pushing for the enterprise realm. 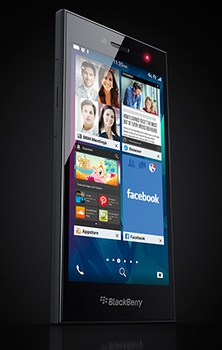 That said, in addition to highlighting BlackBerry World apps such as Box, Evernote, Cisco WebEx Meetings, and Documents to Go, in its press release the Canada-based company pointed to its “dual app storefronts” which includes delights such as Candy Crush Saga, Pinterest, SoundCloud, and Kindle from the Amazon Appstore. So it’s clear that BlackBerry still has aspirations in the consumer sphere too.

“In today’s mobile world — influenced by trends like BYOD (Bring Your Own Device) — where personal and corporate data are frequently under attack from hackers, companies and everyday consumers are finding out the hard way that mobile security is paramount,” explained Ron Louks, president of devices and emerging solutions at BlackBerry.

“BlackBerry Leap was built specifically for mobile professionals who see their smartphone device as a powerful and durable productivity tool that also safeguards sensitive communications at all times.”

The BlackBerry 10 OS device sports a five-inch HD display and 2800 mAh battery, which promises “up to 25 hours of heavy use.”

BlackBerry says the HD Leap will ship this spring starting in Europe for around $275, so it comes in at the affordable end of the spectrum, which ties in with its stated target market of “career builders,” as opposed to seasoned professionals. They’d perhaps be better suited to the $2,000 BlackBerry P’9983 Porsche-branded handset.

Here’s a quick demo video of the BlackBerry HD Leap in action.