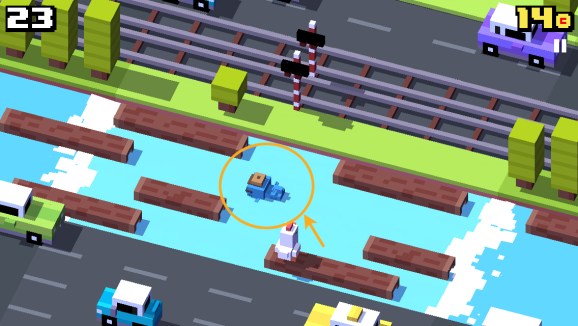 Crossy Road has been a big hit with a new generation of kids who never played Frogger, the old Konami game where a frog tries to cross a busy road. The result for this chicken-crosses-the-road mobile game is a huge number of downloads and more than $3 million in revenues from video ads that are part of Unity Technologies‘ game engine. 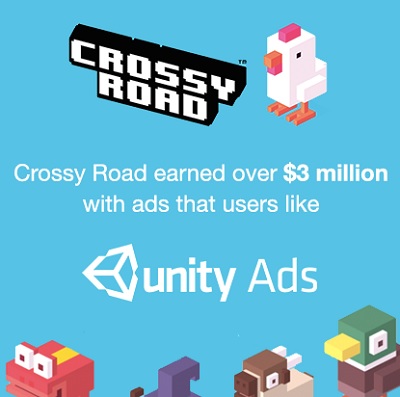 Above: Unity Ads made $3 million for Crossy Road.

It took developers from Australia — Andy Sum, Matt Hall, and Ben Weatherall of Hipster Whale — just 12 weeks to build Crossy Road. They used the Unity game engine and integrated Unity Ads to monetize the free-to-play game with opt-in video pitches. The companies made the announcement today at the Game Developers Conference in San Francisco.

Hipster Whale says that “Crossy Road is an experiment in what happens if a free-to-play game puts players first.” It doesn’t show ads to players unless they choose to watch a video to receive a virtual-term reward. The game launched in November on iOS and is also available on Android now.

Millions of players saw the ads. I’m pretty sure my kid is one of those millions, since she’s been playing it regularly. Crossy Road also integrated Unity Everyplay, which lets players share their gaming moments. To date, more than 500,000 video replays have been shared.

“It’s a fun game and it’s a super validation of where we are going with these extra cloud services,” said John Riccitiello, chief executive of Unity, in an interview with GamesBeat. “Advertising is one of them. It’s nifty to help a developer generate a lot of revenue through an easy integration process.”

“The success of Crossy Road with Unity Ads shows that mobile games can make millions of dollars with ads that users choose to watch,” said Jussi Laakkonen, the executive vice president of Unity Ads & Everyplay at Unity Technologies. “Opt-in, seamless part of the game and high monetization – that’s the holy grail of in-game mobile ads.”

Here’s a video link with Unity Ads in Crossy Road. Unity Technologies has more than 700,000 monthly active users for its development tools.

Hipster Whale cofounder Hall said, “Crossy Road was an experiment to see what happens when a free to play game puts the player first. Integrating Unity Ads was very easy and players can choose to watch video ads to earn in-game rewards if they want to. Crossing $3 million dollars proves that this kind of advertising can be financially successful and also provide the best possible user experience.”