You’ve heard of Smart cars. Well, it looks like Google’s self-driving cars will be considerably smarter.

Patents published in recent weeks show that people working on Google’s autonomous vehicle program have kicked around ideas like calling on humans to take control and alerting pedestrians to nearby vehicles.

But perhaps most interestingly, there’s a patent on a system for using hand gestures to control your vehicle’s accessories.

These patents show a highly sophisticated system that could one day be the future of transportation for millions — if Google can execute on its plans, which first came to light last year.

It’s become clear that the Google cars could already be a huge jump ahead of contemporary ones. An early prototype last year eliminated standard components like mirrors and pedals. The new patents give some insight into the possible innards of these systems.

Of course, the existence of the patents doesn’t mean that these features will be part of the cars, if and when those cars are built. The company might well have run tests before or after applying for the patents and then subsequently scrapped the proposed systems. Or it may scrap them in the future.

Still, the patents give an intriguing glimpse at how thoroughly Google is rethinking how cars work.

Google declined to provide further information on these technologies.

1) Determining when to drive autonomously 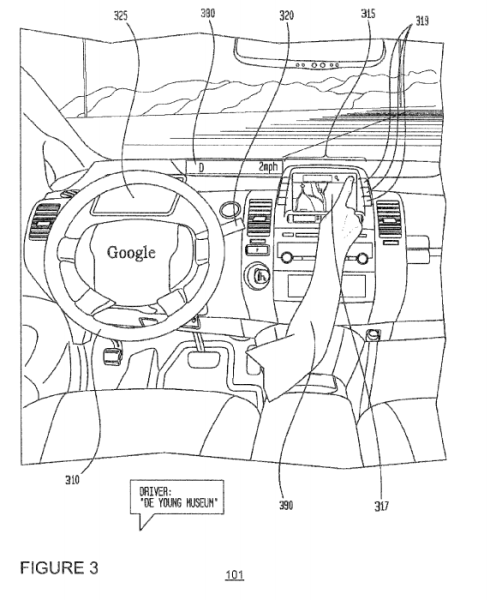 Above: From the Google patent
“Determining when to drive autonomously.”

One of the tricky issues with autonomous cars is what to do if drivers want — or need — to take over from the computer and drive the car themselves.

This patent, filed in March 2014 as a “continuation” of a 2012 patent application, suggests Google wants to give people an opportunity to take control of these vehicles under certain circumstances.

The technology covered in the patent shows how various sensors can pick up information and compare it with maps and data on regular traffic patterns. A big enough deviation from the norm can trigger an alert to the person in the driver’s seat.

At that point, a driver could take control of the vehicle. But if that doesn’t happen, the patent shows how a Google car could slow down or move safely into a different lane. 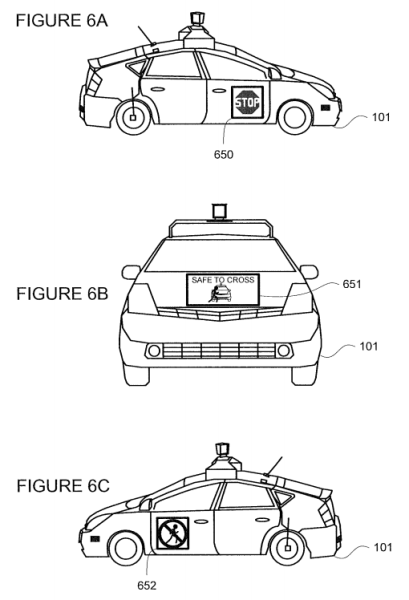 Above: From the Google patent “Pedestrian notifications.”

This patent, filed in December 2013 as a continuation of a 2012 patent, shows how a Google car could respond to pedestrians appearing in the path where the car is headed.

See, when people are driving cars, they can give a hand signal or say something to a pedestrian in addition to slowing down or stopping the car. Even a simple nod of the head can convey enough information to let a pedestrian know that it’s safe to cross in front of the car. But a self-driving car on its own might be limited in its ability to communicate with pedestrians. This system could potentially solve that problem. 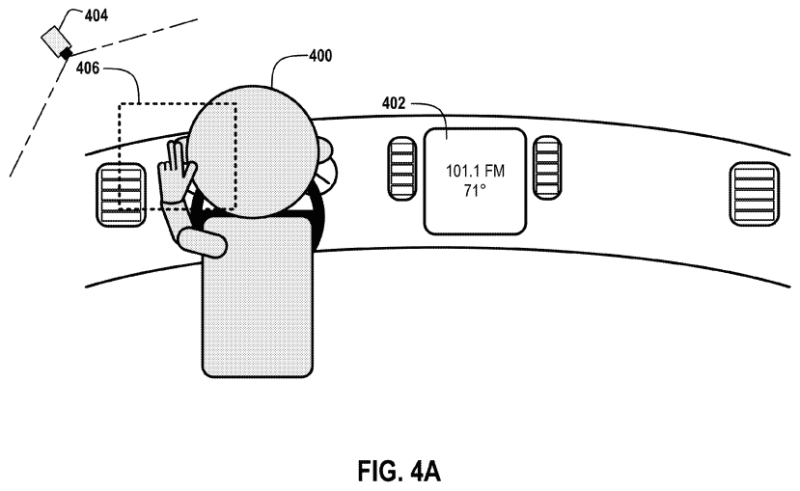 Above: From the Google patent “Gesture-based automotive controls.”

Google filed this patent in 2012. It documents a system for recording three-dimensional images inside a vehicle and then detecting predetermined gestures in certain areas inside the vehicle that correspond to certain functions for the vehicle.

Imagine sticking up your index finger and middle finger on your left hand and waving them near your ear. That — or some other swiping, pointing, tapping, grasping, or pinching gesture — could be an acceptable sign for the car to take an action with this technology.

Actions mentioned in the patent adjusting a seat, changing the speed of the fan, making the in-car temperature hotter or colder, opening or closing a window, and changing windshield-wiper and cruise-control settings.

People could learn pre-set gestures, or different drivers could come up with their own customized gestures, while a face-recognition system could identify who’s who.

The gestures could be safer than, say, glancing at the dashboard and fumbling with buttons to do any of these things.

The patent also contains an implementation of the technology in vehicles featuring sensors of various types that can operate in autonomous mode. In that case, the driver may be able to give input through a touchscreen or voice commands.

Taken together, all of these systems could come in handy for the person in the driver’s seat — whether they are inside an autonomous vehicle or not.