One quote kept running through my head as I played Helldivers: “The only good bug is a dead bug.”

It’s hard not to quote the delightfully bad sci-fi movie Starship Troopers while playing Arrowhead Games Studios latest top-down co-op adventure. In fact, Arrowhead programmer Mikael Bauer told me in June that both the film and the developer’s first game, Magicka, influenced the cross-play (one copy works on each system) exclusive for PS4, PS3 and PS Vita. I reviewed it on the PS4.

Helldivers has come a long way since the demo I played at the Electronic Entertainment Expo in 2014. Arrowhead added two new races, the cyborgs and the ghost-like illuminates, to the chopping block. Up to four players can battle bugs, cyborgs, and illuminates across each of their home star systems in an effort to secure resources for humanity’s home, Super Earth.

I had fun committing acts of extraterrestrial genocide. Helldivers’ unforgiving battle mechanics against a diverse group of villains kept me on edge throughout my galactic military career. However, a lack of variety in the dozens of planets I conquered gave it an unnecessary repetitive feel.

Helldivers replicates that old-school Gauntlet feel, which makes sense given that Arrowhead developed the last Gauntlet game. It starts out pretty easy to get you used to features, including the guns, gadgets and stratagems at your disposal. Stratagems do a number of things like call in an airstrike, request a defensive turret, or respawn a fallen ally. You call in each of these with a precise button combination on the D-pad, such as Up, Up, Down, Left, Right, or Down. 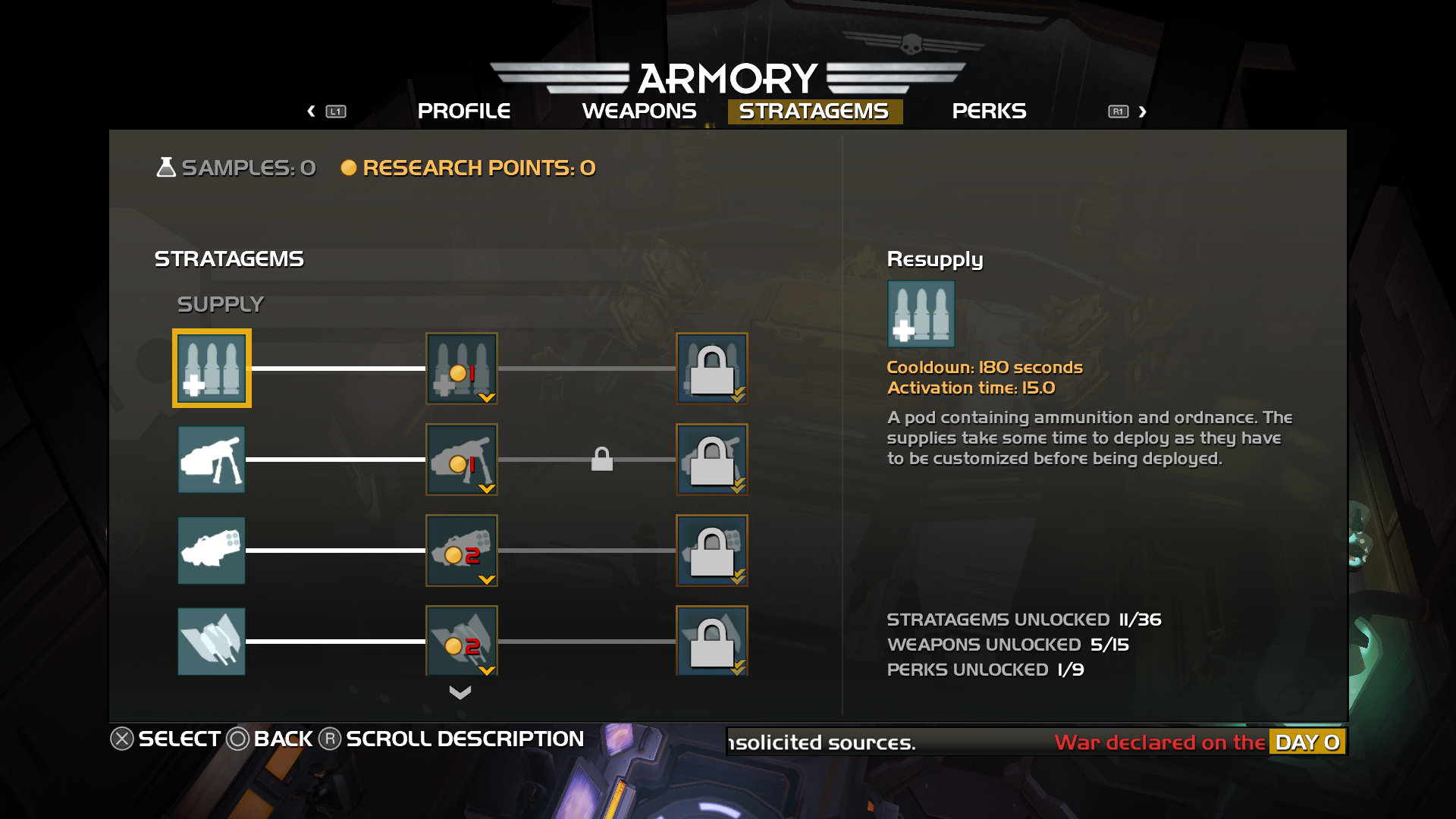 Above: The stratagems menu provides upgrade opportunities for your airdrops.

And that’s where the difficulty comes into play.

Each conquerable system features nine planets, and the challenges they pose vary. The first two are easily dispatched by a single low-level player, while the final planets require a cohesive team of high-level soldiers with luck on their side to beat.

Helldivers creates an interesting paradox for our puny gamer brains. As you progress, stratagems become more important. It simply isn’t possible to defeat the advanced creatures with only your weapons. But waves of chaotic combat make it extremely stressful to stop moving and punch in a D-pad code.

Players also must watch out for each other’s moves. Helldivers features a brutal friendly fire mechanic that makes each soldier susceptible to each other’s fire and stratagems. Even the respawn pod carrying your buddy or the extraction ship that ends the level can kill you. The constant awareness and button-mashing prowess required at higher levels honestly reminds me of a Dark Souls game, and I mean that as a compliment.

Although my favorite enemy in Helldivers is definitely the bug race, I was pleased with the variety Arrowhead offered players.

The cyborgs have guns and devices similar to my soldiers, so I had to employ different tactics than I would against the swarming, melee-focused bugs. The illuminates have lasers, force fields, and stealth abilities that make them extremely tough to deal with.

This “crush waves of AI monsters for no particular reason” approach really gives Helldivers an authentic, arcade fell that many gamers over 25 years old can appreciate. The nostalgia weighs heavy when playing through the campaigns.

At higher levels, I honestly could only handle the bugs. Maybe that’s why I like them the best? Because they bend over for my flamethrower? 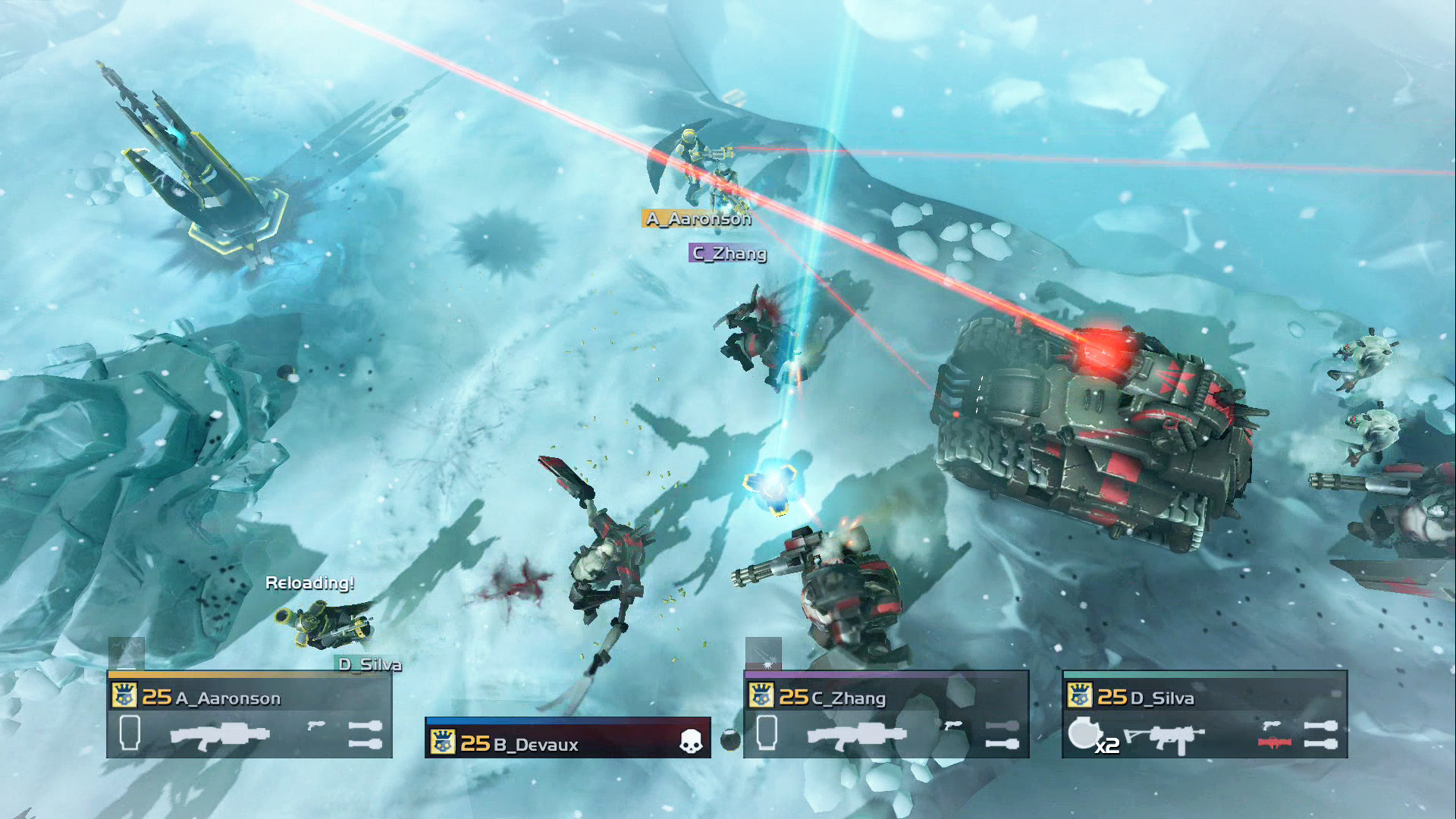 Above: There’s ice, deserts and forests — and they’re all the same to me.

The planets all run together

As my caped soldier spread democracy and death across the galaxy, I noticed something. None of these planets stand out.

Sure, Helldivers features worlds covered in snow, sand, and forests, but their environments really doesn’t mean anything.

Each setting has these random holes that I don’t understand at all. I learned quickly that wandering into one means death, but why? They have lakes and heavy snow patches, but those don’t kill me — they only slow me down. So why does it have these random pits that send us into the abyss?

By the time I reached my 20th and 30th planets, I realized this problem wasn’t going to change. The planets may look different, but the designs are painfully similar. Don’t get caught in a corner. Don’t walk in the slowing stuff, be it lake, snow patch or quicksand. I can jump some peaks but not others with my jet pack.

Arrowhead has no excuse for this. Designing a 2new solar system provides one of the blankest canvasses in all of gaming, so rendering the same world over and over doesn’t cut it.

Helldivers is a fun romp through a tedious space system.

The rapid co-op action makes for a great way to kill a few hours with your friends, but continued travels expose repetitive maps. Helldivers’ true strength lies in its arsenal of elaborate weapons and tactics that allows players to dispatch complex groups of aliens.

The best way to get the most out of Helldivers is to ratchet up the difficulty and increase your collective heart rates. Be bold and bring lots of ammunition.

Helldivers released on the PS4, PS3, and PS Vita on March 3. GamesBeat received a digital copy of the PS4 version for this review.