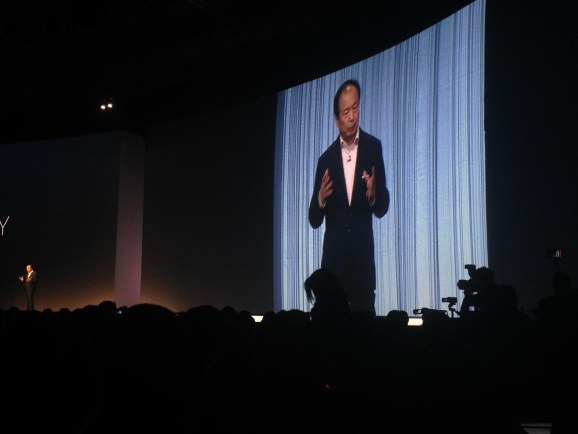 Samsung CEO J.K. Shin demonstrates how he plans to crush Apple like a bug.

BARCELONA, Spain — The big announcement this week at Barcelona Mobile World Congress was the unveiling of Samsung’s new flagship smartphones, the Galaxy S6 and the Galaxy S6 Edge.

As is typical for such things, much of the focus was on the look and specs and price and yada yada yada. But what really want to hear is this: What kind of smack is Samsung going to talk about Apple?

These two rivals have been trading insults and lawsuits for several years now. Apple certainly likes to deliver its own trash talk about Samsung, the harshest being that the South Korean is just one gigantic copycat. And don’t even get Apple started about Android.

This week, Samsung had its own stage in Barcelona, complete with bass-heavy music that made the audiences’ ears bleed and Zen-like statements on a monster-sized video screen like “metals will flow” and “reflections will be free” that sounded like they were cribbed from someone’s first-edition copy of Dune.

Once the show started, though, executives who have watched their company lose considerable momentum to Apple over the past year made sure to highlight all the ways their new phones totally crush the new iPhone 6. Here are four of our favorite:

1. Design with a purpose. Samsung rolled out this slogan during the announcement to emphasize that they have invested a lot of resources in the design and engineering of the new phones. But executives took it a step further on stage by talking about how certain unnamed companies like to spend a lot of time designing what amounted to pretty baubles that have no real use to customers. Apple, cough, cough, Apple. Samsung, by contrast, makes its designs actually useful. Take that, Sir Jony Ive!

2. Battery: Samsung said the batteries on the new phones will charge twice as fast as the iPhone batteries do.

Apple, of course, totally ignores this stuff. In fact, it’s likely an absolute coincidence that Apple the very next day posted a gallery of photos shot by iPhone 6 users on its homepage.