The Khronos Group, a consortium of graphics hardware and software experts, has unveiled its proposal for the next generation of computer graphics.

At the Game Developers Conference in San Francisco, the Khronos Group unveiled its Vulkan applications programming interface as the successor to the OpenGL graphics standard that is widely used in mobile-gaming hardware. 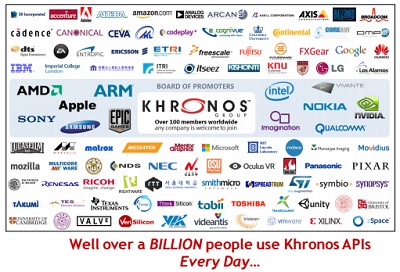 Above: Members of the Khronos Group.

“We’ve had OpenGL as the royalty-free standard in graphics for decades, and Vulkan is the evolution of that,” said Neil Trevett, president of the Khronos Group, a nonprofit consortium with a bunch of hardware, software, and game companies as members. “We have strong APIs that we believe will be widely used for both graphics and computing.”

The goal is to enable game creators to create experiences that have beautiful graphics without bogging down a piece of hardware. Apple dealt OpenGL a blow when it created its proprietary Metal API, which removes a lot of the OpenGL overhead and allows game programmers to write closer to the hardware or “metal.” Accordingly, the Khronos Group is acting to make the new version of OpenGL, previously called Next Generation OpenGL, run more efficiently as well.

Vulkan will also include standards for the use of modern graphics processing unit (GPU) resources to run non-graphics programs.

Trevett said in an interview with GamesBeat that Khronos is releasing two pieces of the larger standard in the form of SPIR-V, a compiler technology, as well as a new version of OpenCL 2.1. SPIR is adding C++ as a compiling language. SPIR-V eliminates the need for a high-level language source compiler and reduces the complexity of a GPU driver, Trevett said. And it will be shared across both Vulkan and OpenCL 2.1. This will lead to a diversity of front-end languages and back-end hardware.

Vulkan itself is available in preview form, and it is not yet finally approved as an open standard API. Vulkan lets developers have explicit control of application workloads for the GPU and central processing unit (CPU) in order to maximize performance and predictability. It has a cross-API intermediate language for shader programs and other support for the ecosystem. A full Vulkan specification is expected later this year.

“All of the GPU vendors are very supportive of Vulkan because applications are often unable to unleash the full power of the GPU because of CPU bottlenecks,” Trevett said. “Vulkan will let the GPU shine. … The software community, led by the game engine creators, also has a lot of support.”

“With direct influence on several generations of hardware and software architectures for milliwatt to kilowatt platforms, OpenGL is undeniably the industry’s most successful 3D Graphics API,” said Raja Koduri, corporate vice president of visual and perceptual computing at Advanced Micro Devices. “Vulkan is a transformation to OpenGL that brings forth exciting low-overhead capabilities to enable compelling increases in performance and power efficiency while maintaining developer productivity.”

Vulkan is similar to AMD’s own Mantle API in its efficiency.

OpenGL was first created 25 years ago, but the architecture for graphics chips has changed dramatically. Many platforms use GPUs, and an open API remains important for getting the performance out of those platforms.

“We have a much thinner, more explicit API which gives the application a lot more flexibility,” Trevett said. “It’s going to appeal to everybody.”

OpenGL and OpenGL ES will still be the APIs of choice for many, but the high end of performance will likely gravitate to Vulkan in the console, embedded, desktop, and mobile markets.

OpenCL 2.1 is also a royalty-free standard for heterogeneous parallel programming — or programming that takes advantage of a GPU’s ability to do a lot of things at once.

“OpenGL’s life has been long, and it’s hard to predict how long Vulkan will last,” Trevett said. “Game apps using it will make better use of the GPU, and it will result in more choices and better games.”