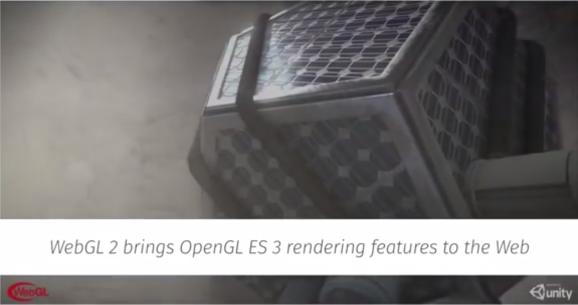 There were a lot of announcements at Game Developer Conference in San Francisco today, but one flew under the radar: a preview of WebGL 2. Mozilla gave us a sneak peek of what will one day power games and other intensive applications in the browser.

WebGL 2 is still under development by the WebGL working group, which is controlled by a consortium of graphics hardware and software experts known as The Khronos Group. Nonetheless, Mozilla was eager to show off what a spokesperson told us is a custom build of WebGL 2:

While the current version of WebGL is based on OpenGL ES 2.0, its successor will be based on OpenGL ES 3.0. Not so coincidentally, The Khronos Group today also unveiled that its Vulkan applications programming interface will be the successor to the OpenGL graphics standard that is widely used in mobile-gaming hardware.

Mozilla is naturally much more interested in web development, and so it shared an update that The Khronos Group sanctioned on its main homepage:

WebGL 2 will raise many restrictions and add new capabilities compared to WebGL 1. For example, while WebGL 1 only required support for being able to render using 8 textures at a time, WebGL 2 raises this minimum limit to 32.

WebGL 2 also includes requirements for higher precision in fragment shaders, adds support for features such as occlusion queries and geometry instancing, and introduces developer-controlled access to antialiasing, multiple render targets, and more. All of this combines to enable Web developers access to more advanced graphics on both desktop and mobile platforms.

The video above was created with the help of Unity Technologies, which today also shipped its Unity 5 multiplatform game engine. This latest version includes experimental support for WebGL export, which aims to let game developers repurpose their mobile games for the web, and Mozilla says it worked with Unity engineers to bring their ES 3.0 target to WebGL 2.

Again, WebGL 2 isn’t ready for prime time yet, but companies like Mozilla and Unity are already willing to push it forward so gamers can enjoy an increasingly superior experience right in the browser.