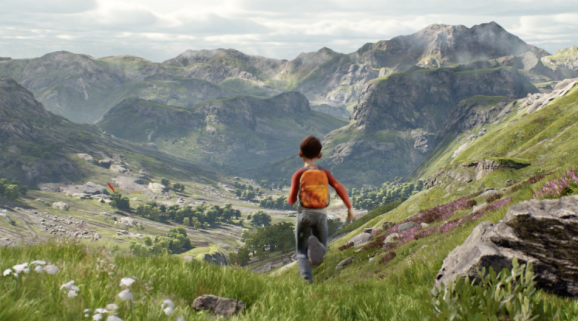 Epic Games' A Boy and His Kite, a new technical demo for its Unreal Engine 4.

SAN FRANCISCO — It’s all flowers and blue skies for Epic Games and its Unreal Engine.

At the 2015 Game Developers Conference this morning, Epic Games held a press conference to discuss the current state of its Unreal game-making tools, sharing insights on its rapid growth in the past year. It was there that they released a brand new technical demo for Unreal Engine 4, and it’s a massive departure from previous years’ showcases.

The company announced that its latest development toolset is now free for all users earlier this week at the conference. This move came exactly one year after the group announced a flat $19 monthly fee for access to its tools.  Epic Games founder Tim Sweeney said that the company wasn’t sure what would happen following this change. But it worked out — over the past year, the Unreal community has grown 25-fold.

Sweeney said that developers at established studios were using Epic’s tools at home in their downtime. This turned into a grassroots situation where adoption spread to more studios as well as outside the game industry. He noted that film makers and industrial designers have since embraced the platform — and that these companies have shown Epic techniques that it didn’t realize were possible.

The new demo, “A Boy and His Kite,” incorporates the feeling behind this growth and change, and it reflects Epic Games’ vision for the future of the game industry. Sweeney says that the video’s open world and lighthearted tone are representative of where the company’s mindset is at.

The demo follows a young boy flying a kite in a lush valley marked by flowers and trees. The kite gets away from the boy and flies over the valley, over fields of deer playing. This is a departure from past technical demos such as previous years’ Elemental and Infiltrator demos. Both feature monsters, robots, guns and explosions and have a combative tone. Epic wanted this year’s demo to reflect a more positive tone, says Sweeney. The demo was the result of Epic Games asking a team of developers what Unreal Engine meant to them today.

“It’s blue skies ahead for the game industry and we’re only at the beginning of it,” he said.

The demo ended with the tagline “If you love something, set it free” — a nod to Epic’s decision to make its tools free for all users.

The brawn behind the beauty

Some serious muscle powers the lovely visuals of “A Boy and His Kite.” Nvidia’s newly revealed Titan X graphics processor powered the demonstration, enabling Epic’s Unreal Engine 4 to achieve new graphical benchmarks. The entire video is rendered in real time, running at 30 frames per second and taking place in 100 square miles of terrain. It features cinematic quality depth of field and motion blur, as well as fully dynamic lighting.

In a meeting with GamesBeat, Epic Games president Paul Meegan showed that you could freely control the demo. He moved a controller’s thumbstick to have the view moving over terrain freely, showing off an immense level of detail in the ground coverage. He asked me to imagine an open-world game like The Elder Scrolls V: Skyrim at a similar level of detail.

My eyes lit up.

Meegan explained that all of the terrain in the demo is procedurally generated, saying that even the way the grass moves in the wind is powered by Unreal Engine. He said that while the event’s demo was running on the latest Titan X GPU, the live demonstration I saw was running on currently available GeForce GTX 980, and that even older processors would run it — the engine does a lot of the heavy lifting.

Meegan stressed that accessibility and ease of use is a primary goal for Unreal Engine.