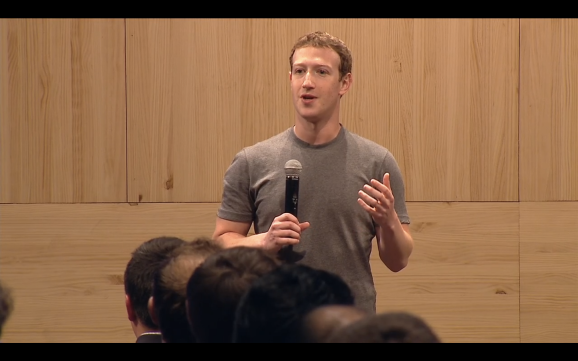 Speaking publicly from Barcelona, Spain for the second time this week, Facebook CEO Mark Zuckerberg said today that in order to build a strong organization, it’s important to hire well. And for him, that boils down to the reality that he would only hire someone he’d want to work for.

“I have a simple rule,” Zuckerberg said. “I will only hire someone to work directly for me … if I would work for that person.”

Zuckerberg appeared at a public Q&A session from Barcelona, where thousands of mobile industry professionals have gathered this week for Mobile World Congress. It was the latest in a series of town hall-type meetings he’s held in cities around the world. In January, Zuckerberg appeared in Bogota, Colombia and spoke about the launch there of Internet.org. As has been the case with these town halls, Zuckerberg answered questions asked by Facebook users in the room, as well as some posted in advance to the official Q&A with Mark Facebook page.

Earlier this week, Zuckerberg keynoted at Mobile World Congress, telling the audience there that Internet.org has been a success in terms of bringing connectivity to thousands of users for the first time, as well as benefitting the bottom line of the carriers providing the infrastructure by bringing them many new paying subscribers.

During today’s talk, the Facebook CEO covered much of the same ground as at previous Q&As. He talked about Facebook’s philosophy of making it possible to share everything with everyone — although he acknowledged the company sometimes chooses to adhere to various countries’ more limited views of that philosophy in order to ensure that Facebook can continue offering its service everywhere.

He also joked about how he enjoys visiting Spain because of its ham, and told a story about having a ham delivered to him as a birthday present but having it intercepted by security personnel thinking it might have been a bomb.

More interesting was his answer about how to hire good people. He said hiring people you’d want to work for, throughout an organization, means “you can’t go wrong.”