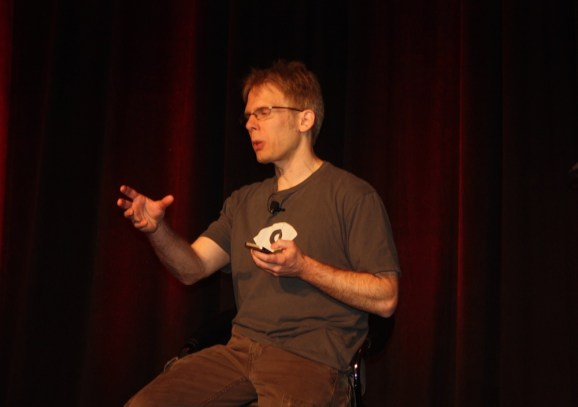 SAN FRANCISCO — Oculus VR is the company leading the charge on cutting edge virtual reality, but it’s also developing a solution that works with mobile phones. Now, the company’s chief technology officer came out on stage at the Game Developers Conference to explain why he cares so much about this side project.

John Carmack joined Oculus VR in 2013, and he has spent a lot of his time developing a mobile virtual-reality solution in partnership with consumer-product giant Samsung. For enthusiasts, this seemed like a distraction from the main event: the consumer version of the Oculus Rift VR headset. But Carmack doesn’t see it like that. He thinks that the eventual, ideal version of VR looks a lot more like the Samsung Gear VR than the Oculus Rift.

“We’re not going to get to a billion devices with a PC peripheral or a gaming console,” he told an assembled crowd of developers during a presentation at GDC.

The Oculus CTO explained that he’s not usually the kind of person to talk about the nebulous future where nearly every man, woman, and child on Earth adopts a new technology. But with VR, he cannot help himself. He gave an example where his grandmother uses a mobile phone to take 360-degree panoramic photographs that she then looks at later with her Gear VR.

“We’re going to be surprised about how many people we wouldn’t expect to care about virtual reality who end up picking this up,” he said. “And they may come for different things, but they’ll find games there. I firmly believe that mobile is an important direction.”

Carmack went on to explain how the mobile version first came into existence. Oculus chief executive Brendan Iribe made a trip to Korea to talk with Samsung about displays for the Oculus Rift. They agreed to work together, but Samsung wanted help with its phone-holding mask. Carmack took a look at it, and it was like a lot of other devices and toys he had used previously. That mean it had a lot of problems.

“Samsung’s original phone holder had everything wrong with it that you would expect,” said Carmack. “It didn’t even have a DK1-level of virtual reality. When you see companies doing it wrong, there’s that strong desire to take it and show them how it’s done. I realized it wasn’t very good, but I [knew I could] do something good.”

Figuring out how to turn Samsung’s rough prototype into something worthy of Oculus was actually what convinced Carmack to join the company full time. This project was something that he could turn around in a reasonable amount of time — something that would have an almost immediate impact.

“We started working on it, and for the first six months it was just me working on software,” he said. “Samsung wanted to productize it immediately, and that created a lot of tension between Samsung and Oculus.”

Oculus worries a lot about “poisoning the well,” as Carmack put it. The company is very aware of the fact that if some very bad VR devices go out, they could ruin the potential for the industry to take off.

As a compromise, the two companies settled on calling the first version of Gear VR the “Innovator Edition.” Carmack admits that many people at Oculus wanted to call it a “Developers Edition,” but Samsung has never released a developer kit. But labeling it as for “innovators” conveyed the same message: This isn’t ready for the regular consumer.

But now that Gear VR has had some time on shelves, Oculus is finding out that it really almost is ready.

“The response has been a lot better than anyone expected from this,” he said.

This convinced the Oculus team that it doesn’t have to get everything right before introducing a product, and it now has Samsung and Oculus working together to release a final consumer version of Gear VR. That device will hit before the end of this year, according to Carmack.

At this point, it’s up to developers to start creating content for that launch. Samsung and Oculus are promising a full Galaxy phone-style media frenzy for Gear VR, which means plenty of commercials and other kinds of marketing. The best games available when the system launches should have a good opportunity to highlight the potential of VR for a lot of people.