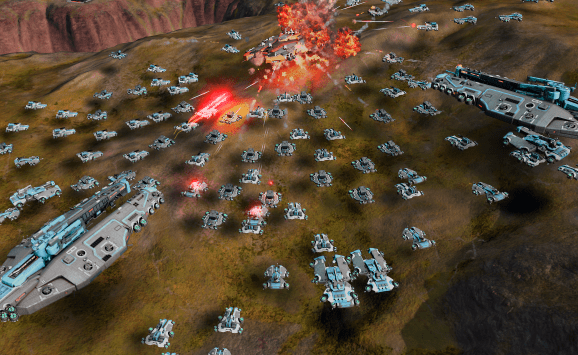 The biggest parts of Stardock’s second real-time strategy game announcement this morning have little to do with Ashes of the Singularity’s futuristic plot.

It puts you in a time when humans have shed their bodies and become beings of pure consciousness, controlling thousands of units with your thoughts alone. In this future, you are the hive mind.

To enact that onscreen, Stardock uses Oxide Games’ new Nitrous Engine, which not only allows you to control fleets of individual ships but even independently provides A.I. to every gun on every one of those ships. Every shot they fire has its own targeting and ballistic model.

“The scale of Ashes required us to create a new type of 3D engine,” said Dan Baker, a graphics architect at Oxide Games, said in the announcement. “We wanted to make a game that didn’t just depict a battle but an entire war in real time, with thousands of independent units acting simultaneously.” 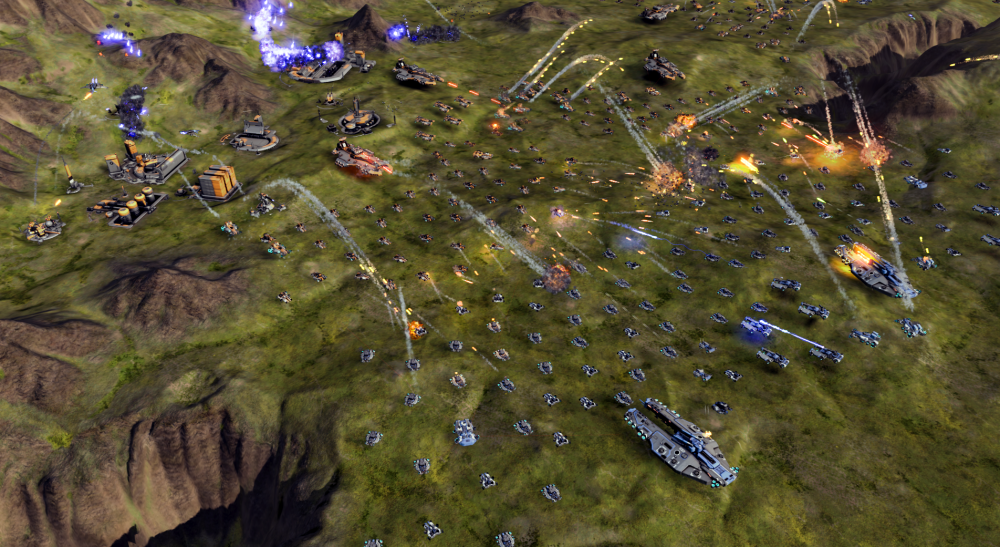 Above: A battle rages in Ashes of the Singularity.

Image Credit: Ashes of the Singularity

The goal is to realistically replicate – well, as realistically as the setting will allow – war on a massive scale on multiple fronts, with armies that move and act like collections of individual ships and soldiers.

It’s telling that Ashes is one of the games on display at the Microsoft area at the Game Developers Conference today; Brad Wardell, chief executive of Stardock, told me this fall that it’s also been held up as an example of new tech by major chip makers.

Stardock knows a thing or two about strategy in space; its turn-based Galactic Civilization space strategy games, while not RTSes, are best-sellers.

Ashes will offer a single-player story campaign and player-vs.-player combat complete with leagues, leaderboards, stats, and other features – also thanks to a new engine, Stardock’s Project Tachyon, a cloud-based “metagaming service” led by Arian Luff, who helped put together Blizzard Entertainment’s Battle.net.

Ashes of the Singularity has a founders program, launching today, that will offer access to the alpha test. Stardock didn’t announce a release date. Its plot centers around the conflict between these ultra-evolved humans and the Haalee, who would like to “save the universe” from these human predators. Both sides are playable in Ashes.

“In Ashes of the Singularity, players can take command of the forces of either the post-humans or those of Haalee,” Wardell said in the launch statement. “This is a galaxy-wide struggle in which each ‘battle’ wages across the surface of an entire planet. The scope of the conflict is unlike anything players have seen before.”