Two out of every three consumers say they would like to try shopping with the help of the Oculus virtual reality system.

That was one of the conclusions of the Re-inventing Retail study from Walker Sands, a market research firm. And 30 percent of consumers say they would likely shop more online if they could try out products using virtual reality. 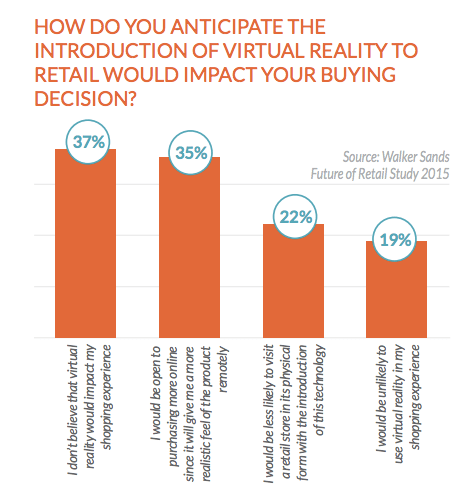 Above: Data shows that consumers want to shop with the help of virtual-reality systems like Oculus.

Walker Sands has looked at the impact of other next-generation technologies on shopping, as well. In its study, the firm also examined people’s feelings about incorporating drones into their shopping experience. Two-thirds of consumers say they expect to have clothes and books delivered by drones within five years.

With Oculus, which Facebook bought last year for $2 billion, there’s plenty of reason to think shopping can be a richer experience. That’s because users can see a highly detailed 3D visualization of just about anything. In a way, it’s ideal for looking at products without having to go anywhere.

According to Walker Sands, 49 percent of consumers it surveyed said they want to try Oculus when it is released, and 32 percent said they think they’ll buy it. Fully 63 percent said they “expect such [virtual reality] capabilities to change they way they shop,” Walker Sands wrote, while 35 percent say they would be “more open to purchasing more online.”

On the other hand, this could be bad news for traditional retailers. “Twenty-two percent of consumers,” Walker Sands wrote, “say they will be less likely to visit a physical store” after Oculus is released.