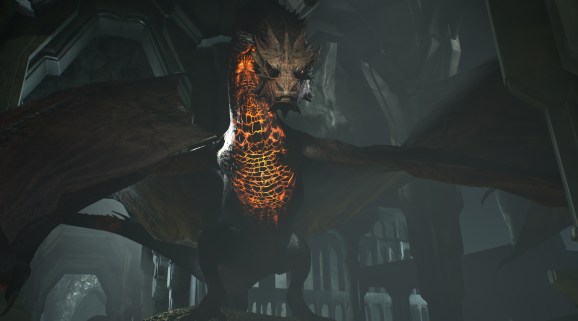 Smaug, from Weta Digital's "Thief in the Shadows" VR demonstration.

Epic Games announced a partnership with Academy Award-winning visual studio Weta Digital during a 2015 Game Developers Conference (GDC) press event this morning. The two companies have come together for a new virtual-reality experience called Thief in the Shadows, which uses CG assets from the film The Hobbit: The Desolation of Smaug.

Epic announced that Thief in the Shadows is available on the GDC expo floor today, running on the Oculus Rift Crescent Bay prototype hardware. This had attendees swarming the company’s booth within minutes. I managed to squeeze my way in to try the demo for myself.

The VR experience is set in the Lord of the Rings universe, with viewers taking on the role of a hobbit thief. It began in a massive treasure chamber, one so large that I had to crane my neck fully to see it all. Dimly lit piles of coins shimmered under my feet. I could see even dimmer caves in the distance, set off by massive statues on either side. I had to physically turn around to take it all in.

Some of the coin piles began to move, with gold sliding down toward my virtual feet. Smaug, an enormous dragon, pushed his face out of a large pile and began to swim around the coins, Scrooge McDuck style. He began to speak in a thunderous voice, claiming that he could smell a thief among his treasures. Smaug circled me, forcing me to turn around in circles to keep track of his motion. His movements and voice became increasingly aggressive — so much so that I caught myself stepping back as he moved nearby.

Smaug moved in after taunting me for a bit, placing one of his massive eyes directly above my body as he scolded me for breaking into his chamber. His face was massive — so big that I had to turn my head all the way up and swing it back and forth to take just to take it in. The level of detail in his closeup was astounding — every scale and tooth was photorealistic. I could almost smell his breath.

The dragon runs on the new Nvidia Titan X graphics processor, also announced this morning during Epic Games’ event. This has the demo running at 90 frames per second, making for a smooth experience, which had the fire he breathed on me looking like a special effect straight out of a Hollywood film.

The quality of virtual reality experiences is increasing at a rapid rate. This segment of the market is still in its infancy, and we’re just now at the point where creators are joining together to accelerate its development. Nvidia’s GPU, Epic’s Unreal Engine 4, and Oculus’ latest prototype came together to create this virtual world, making for one of the most immersive and impressive VR showcases yet.