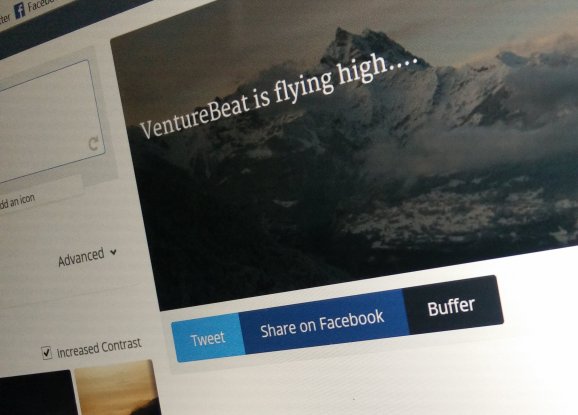 “A picture speaks a thousand words,” “seeing is believing,” and a million other image-based cliches aside, it has been proven that including a picture in a social post (e.g., Twitter or Facebook) encourages interactions from friends and the public. And this is why popular social-sharing and scheduling tool Buffer is launching a tool specifically with this in mind.

With Pablo, Buffer’s aim is to help social media managers, marketers, and everyone in between create and share engaging imagery in their tweets and Facebook status updates. In under 30 seconds, actually.

“If you’re not a designer, it’s really hard to create nice images right now for your content and social media posts,” explained Buffer cofounder Leo Widrich. “Sort of similar to it being hard to take nice photos without being a photographer — before Instagram existed. So we hope that Pablo can fill that gap and allow anyone to create beautiful images for their social media posts or blog posts.”

Following a short beta period, Pablo is now officially “ready” for the public gaze, and based on our tests it is a really simple, effective tool. You basically enter some text into a box, format it, upload a photo (or use one of the existing “stock” images), and you’re good to go. You can instantly share it to Twitter, Facebook, or “Buffer” it.

Above: Pablo by Buffer

If you’re new to Buffer, the San Francisco-based company has built a solid reputation for its easy-to-use social sharing tool, which lets you schedule messages to post at pre-set intervals throughout a day. So, you install the Buffer browser extension or download the mobile app, connect it to your social accounts, and you can “Buffer” posts to publish “every half-an-hour” or a variant of your choosing. It’s useful for those looking to spread posts out.

With Pablo, Buffer is offering a free, complementary tool that works in tandem with its main offering, and taps the increasing trend of sharing images (with text on top) rather than plain text, to increase Facebook likes and Twitter retweets, and generally boost shareability.

“Images in general have been gaining huge momentum on social media for the last few years,” said Widrich. “We even did a study on this, showing how tweets with images increase engagement by up to 150 percent.”

Many studies and reports have revealed similar increases of shares when images are included, so this could be useful for quickly sharing event invites, facts and stats, or anything you want propagated across the social realm.

“Embracing the visual web, not just with great tips, but actual tools was a key thing we wanted to bring in here,” added Widrich. “We found a lot of writers, for example, used Pablo to make their content more unique, such as [to set] a teaser image for their blog posts.”