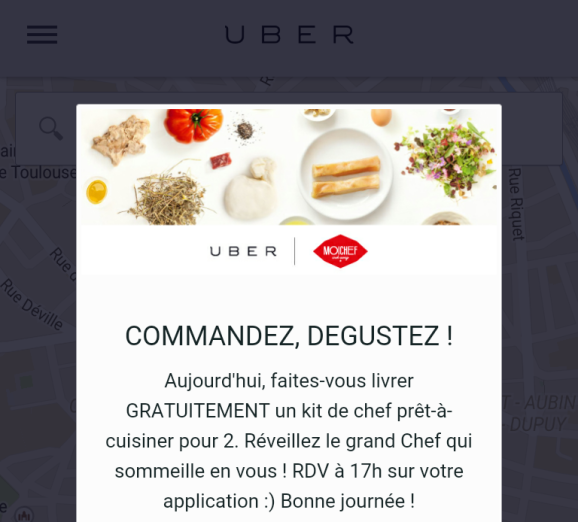 Uber is running a promotion today and tomorrow with French startup MoiChef to deliver meal kits and recipes to users, the latest venture into food deliveries by the ride-sharing company.

MoiChef, based in Toulouse, France, launched three months ago. The company partners with local chefs who package ingredients and recipes that they use to cook meals in their restaurants. MoiChef then delivers a kit with those ingredients and the recipes for customers to prepare at home.

The concept is a bit like Blue Apron, except instead of assembling the meals and recipes itself, MoiChef delivers meal kits that are prepared by local restaurants.

MoiChef cofounder Tristan Laffontas said he got the idea for the company while taking an Uber in Paris. And when he mentioned this to the local Uber representative in Toulouse, the conversation sparked the idea for the promotion this weekend.

When Uber users in Toulouse open the app between 5 p.m. and 7:30 p.m. today or 2 p.m. and 7 p.m. tomorrow, they will be alerted to the promotion. Laffontas will actually be the Uber driver, and he will deliver a free meal kit from MoiChef’s newest restaurant partner, Chez Jules.

To get the free meal kit, however, there is a trick. The Uber user has to order the meal when the MoiChef car appears to be available on the Uber app. So there will only be a limited number of free meals actually delivered, Laffontas said.

While the initial promotion with Uber is small, Laffontas is hoping it will lead to something bigger. MoiChef is looking for ways to roll out its service out across Europe and is looking for a partner to deliver meals.

As for Uber, the MoiChef program is the company’s third foray into meal delivery. Uber current has a meal delivery service in Los Angeles called UberFRESH, and it recently announced UberEATS in Barcelona. Uber’s ridesharing service is otherwise banned in Spain.