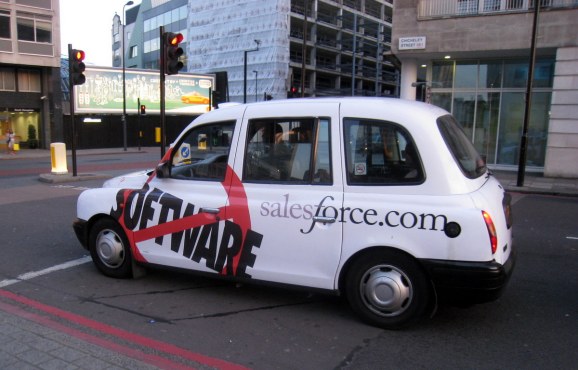 Last week, Salesforce reported some pretty stellar fourth quarter and fiscal year results along with a strong outlook for the coming year. The company continues to expand into new areas, bringing the “power of the cloud” to what will become new business units that will drive growth for the company.

What I found interesting about last week’s investor call, however, was what was not talked about: Microsoft or mobile. From a competitive standpoint, Salesforce made it clear that its sights are set on Oracle and SAP, not Microsoft, which is in a distant fourth position. But Microsoft, under Satya Nadella’s leadership, is making some slick moves that I predict are going to impact Salesforce’s business in the future, despite the partnership the two companies forged last year. Here’s why:

1. Microsoft owns your email and calendar

Selling, at the end of the day, is about communicating. And salespeople spend a lot of time communicating with their prospects over email and in-person meetings. So they end up living in their email and calendar. In fact, most salespeople detest using CRM of any kind, which explains why the industry is plagued with adoption issues. They would rather work in their inbox and calendar and push information to their company’s CRM system. With Exchange and Outlook continuing to dominate the email and calendar market, Microsoft has and will continue to have some of the tightest integration between email, calendar, and CRM.

2. Microsoft Dynamics is popular in the midmarket

Salesforce spent a lot of time on its investor call talking about the large enterprise deals it is winning because that’s what the Street likes to hear, but the company has to keep its eyes on the midmarket, where Microsoft Dynamics is right behind them. The midmarket is an engine of growth and a great counterbalance to the inherent spikes of big deals. And Microsoft is getting good at winning here. Not only is its Cloud version competitively priced for the midmarket, it also has a strong reseller channel that can sell cost-effectively into this market.

4. Microsoft’s desktop vs. cloud heritage is actually working in its favor

An all-cloud architecture doesn’t work for the new world of Mobile, which is especially important to sales — just try using Google Docs on your iPhone in Airplane mode or in an area with spotty coverage. Microsoft comes from the client-server world where data and software run locally on the device and sync to a server on the network. That style of computing architecture is what the best and most often-used mobile apps are built on: Apple’s Mail and Calendar apps, Evernote, Dropbox, etc. (Except that the “server” part of client-server is now in the cloud.) The “No Software” legacy that made Salesforce so popular is now ironically in conflict with where mobile architectures are headed.

No, I don’t mean Windows Phone. The new Microsoft is reinventing itself as a mobile-first company, and more importantly, an iOS and Android-first company. Just since December, it has acquired or made investments in four mobile startups: Acompli, Sunrise, HockeyApp, and Cyanogen. None of these companies were built on the Windows Phone ecosystem. Plus, Microsoft has built killer iOS and Android apps for Microsoft Office and even opened it up to third party cloud storage. The company is finally coming to terms with its evolving role in the new mobile wars.

This renewed energy we’re seeing with Microsoft’s mobile-first mindset is just one example signaling that something good is happening under Satya’s leadership. For Microsoft, it’s not just about business expansion, but bringing the company back to its technology innovation roots. If it applies this same energy and mindset to Dynamics CRM, I expect we’ll hear more about Microsoft as a serious challenger in future Salesforce investor calls.

Chuck Ganapathi is the founder and CEO of Tactile. Previously he was a SVP at Salesforce.com, where he led one of the largest product development efforts in the company’s history and was responsible for its flagship Sales Cloud, Chatter, and Mobile products.