On a recent afternoon during the Sundance Film Festival, hikers carefully picked their way across a rickety footbridge miles above the tree line, dodged treacherous falling boulders, and enjoyed the sweeping views of the Dolomites mountain range in Italy as the wind blew across their faces.

Of course, they weren’t really in Italy. They were still in Utah, at Sundance, inside a virtual reality experience created for outdoor footware company Merrell called Trailscape. The path that led to this virtual hike was an interesting one. 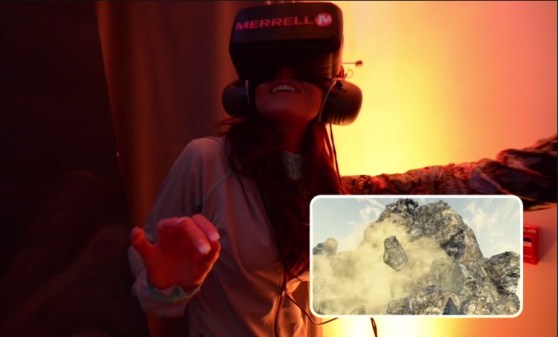 Last year, Merrell had a dilemma. Finding that it’s brand wasn’t proving relevant to young consumers and faced with the reality of an aging customer base, it needed a big idea to get back to its authentic outdoor performance roots and become meaningful to a new generation.

To remain competitive, Merrell had to become more modern, and needed to engage with millennials. Research told us this group thrives on shared experiences and is motivated to use nature as its playground for personal empowerment. Millennials also embrace technology as part of each experience.

When Merrell created the Capra, a performance hiking boot inspired by mountain goats, for scrambling on difficult trails, we knew we had our moment to become relevant with a disruptive approach, giving people a more authentic opportunity to participate with Capra and the brand vision of “experiencing the awe of the outdoors.”

We decided to send potential consumers on a breathtaking, thrilling (and frankly, sometimes scary) hike in the Dolomites. 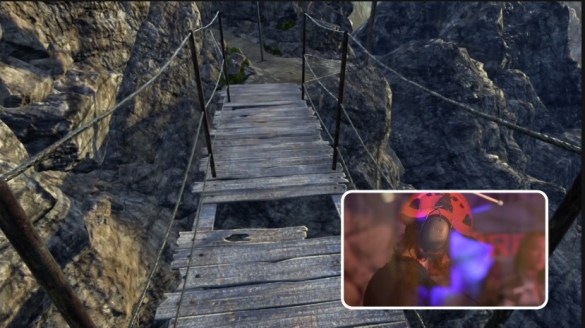 To do that, we used the most advanced virtual reality technology available and worked with Framestore, an Oscar Award-winning visual effects company, to bring one of the top scrambling destinations in the world to life. Together we developed the first commercial use of “walk around” virtual reality using Oculus Rift. What we created allowed people to virtually experience some of the Dolomites’ most thrilling and breathtaking trails and vistas. Dubbed Merrell’s “Trailscape,” the immersive sensory experience debuted at Sundance 2015 to reach tastemakers, celebrities, outdoor enthusiasts, and everyday people. “Mind-blowing,” is how most participants described the experience.

Virtual reality is fast becoming one of advertising’s buzziest tactics, and technologies like Oculus Rift have made it possible to create rich, multisensory virtual experiences. Last year during the Word Cup, Coca-Cola held a virtual reality experience for fans, giving them a peek into locker rooms in Brazil’s Maracana Stadium. HBO has also been an early adopter, replicating a massive wall of ice from its hit television series “Game of Thrones.” The wall of ice allows users to experience wind and floor shaking as they travel in a virtual elevator along the icy face.

In reviewing many of the current implementations of VR and developing Merrell’s Trailscape, we learned some important lessons (some the hard way), including the fact that first and foremost, the technology is still evolving and requires flexibility from a planning and production standpoint.

Here are eight Virtual Reality best practices we came away with:

1. Strategy first: The coolest and most disruptive VR technology means nothing if it’s not tied to brand strategy. What is your brand about, and how does VR help deliver it against the target?

2. Watch out for motion sickness: This is a huge factor in VR. You need to be careful to ensure that your users see the sort of views and motion that their minds are expecting. If someone looks right, but their field of view shifts to the left, the disconnect is likely to make them feel sick. It requires a processor and FPS fast enough to keep up with the human eye and deft development to create an experience that doesn’t short-circuit an individual’s normal responses.

3. Technology is key: It’s easy to get distracted by the use of the VR headset, but the real meat of the tech experience is dependent upon having a processor powerful enough to support the experience from a graphical standpoint. For something like Trailscape, the depth of the 3D environment and the speed at which the engine needed to react to human head/eye movements couldn’t be supported by a consumer-grade computer and requires a custom-build CPU in order to run.

4. Expect the unexpected: Between the elevation in Park City and the mineral content of the ground beneath us, some of the native sensors in the VR headset were going haywire causing the in-goggle view to drift — not the sort of thing you can test for at sea level. After a long night of debugging, rebuilding, and pure luck, the crisis was averted — just in time for the launch.

5. Go beyond the visual: For a truly immersive sensory experience, going beyond the visual means considering factors like sound design, tactile scenic components, and “4D” elements, such as vibration and artificial wind. These are huge factors in taking full advantage of users’ senses, particularly for the exploration factor of Trailscape. Using a VR headset as part of an experience isn’t news by itself anymore; it’s now about context. In many ways, the hardware/tech story is more about the content and using VR headsets in ways that make sense for the medium and not just using the technology for its own sake.

6. Optimize your location: The financial investment in something like this can be significant, and the number of people who can experience it is often low, so it’s important to have a plan to get the installation in front of as many eyes as possible. Despite its size, Trailscape was designed to travel as efficiently as possible without being dependent on anything specific from the Sundance venue.

7. Keep costs in mind: As costs add up, the number of active installations you can afford may have to be minimized. For us, that meant that we only had one active headset/installation and therefore had to manage expectations regarding how many people can participate.

8. Go for curb appeal: It’s crucial to think about the “curb appeal” of the experience. If someone walks in off the street, what do they see? Does it look fun or impressive? Since a relatively low number of people will be able to participate, and explaining VR doesn’t do it justice, it’s important to keep in mind that sharing photos of the installation and your physical setup around it will be how most people will spread the word about what you’re doing. You can see our video of the experience here.

Even though we’re still in the early days of VR for marketing, it’s easy and exciting to imagine its potential. Watching people walk, arms outstretched for balance and treading gingerly for their next careful step on the Italian mountain’s treacherous trails, all while wearing an awestruck smile, was a thrilling demonstration of the possibilities.

We can’t wait for what’s next.

Tracy Brady is VP of agency communications at Hill Holliday.