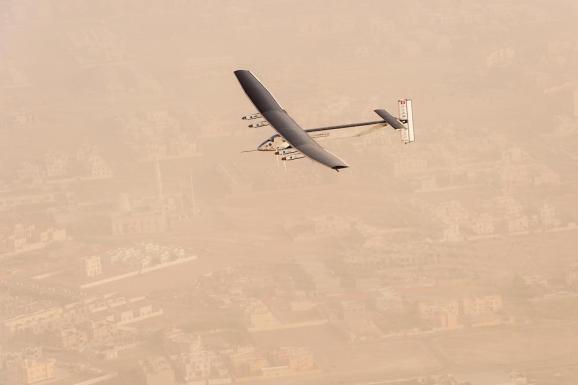 A small piece of history is being attempted today, with André Borschberg taking off in his Solar Impulse aircraft to try to make it all the way around the world powered entirely by solar energy.

It’s been six years since the first manned solar plane was unveiled, with the first flight taking place a year later. However, the Solar Impulse’s journey has been fraught with delays–we reported back in 2010 that the round-the-world attempt was originally scheduled to take place by 2012. The aircraft has managed to garner headlines for smaller-scale jaunts, however, including a San Francisco-to-New York trip back in 2013 that took two months and several stopovers to complete.

Today’s flight took off from Abu Dhabi, United Arab Emirates (UAE), a little after 7 a.m. local time (7 p.m. PDT), and will head eastward through India, China, the U.S., Europe, and Africa before landing back in the UAE in August. Yes, commercial airlines can relax for now–the single-seater aircraft will take around five months to complete the circumnavigation, with a multitude of stopovers for rest and maintenance planned. This time will also be spent campaigning on behalf of clean technologies.

Borschberg won’t undertake the full journey, however, as some stages will be piloted by record-breaking hot air ballooner Bertrand Piccard–someone with a big family tradition of record-setting feats. In 1960, Piccard’s father, Jacques, was one of the first people to reach the deepest place in the ocean, while in 1931 his grandfather, Auguste, was the first to reach the stratosphere in a balloon.

The Solar Impulse team had to build a bigger version of the original Solar Impulse prototype, given that it will be required to be in the air for longer periods of time and thus will need to store more energy from the sun. The aircraft sports a 72-meter wingspan–which is actually wider than a Boeing 747 jumbo jet, as the BBC points out–and it’s these wings that house the 17,000 solar cells that will be used to power the lithium-ion batteries for nighttime flying.