Check out our Reviews Vault for a collection of GamesBeat’s previous review articles!

Despite being just as old as some of the most popular Japanese role-playing game series out there (the first Atelier game shipped on PlayStation in 1997), Gust’s Atelier catalog is a bit of a sleeper series. But these alchemy-focused games are well made and have unique hooks and enough charm to stand up to the bigger and better known franchises. It’s a shame that they’re not more popular outside of Japan.

The long-running console role-playing game series’ Dusk chapter is wrapping up with Atelier Shallie: Alchemists of the Dusk Sea, a PlayStation 3 release that Tecmo Koei published (NIS America published all of the games before the Dusk chapter in America). Its story takes place some six years after the previous title, Atelier Escha & Logy: Alchemists of the Dusk Sky, and brings with it some smaller improvements to its gameplay systems. While it doesn’t have any sweeping changes, Atelier Shallie is probably the most varied and enjoyable Atelier game yet. 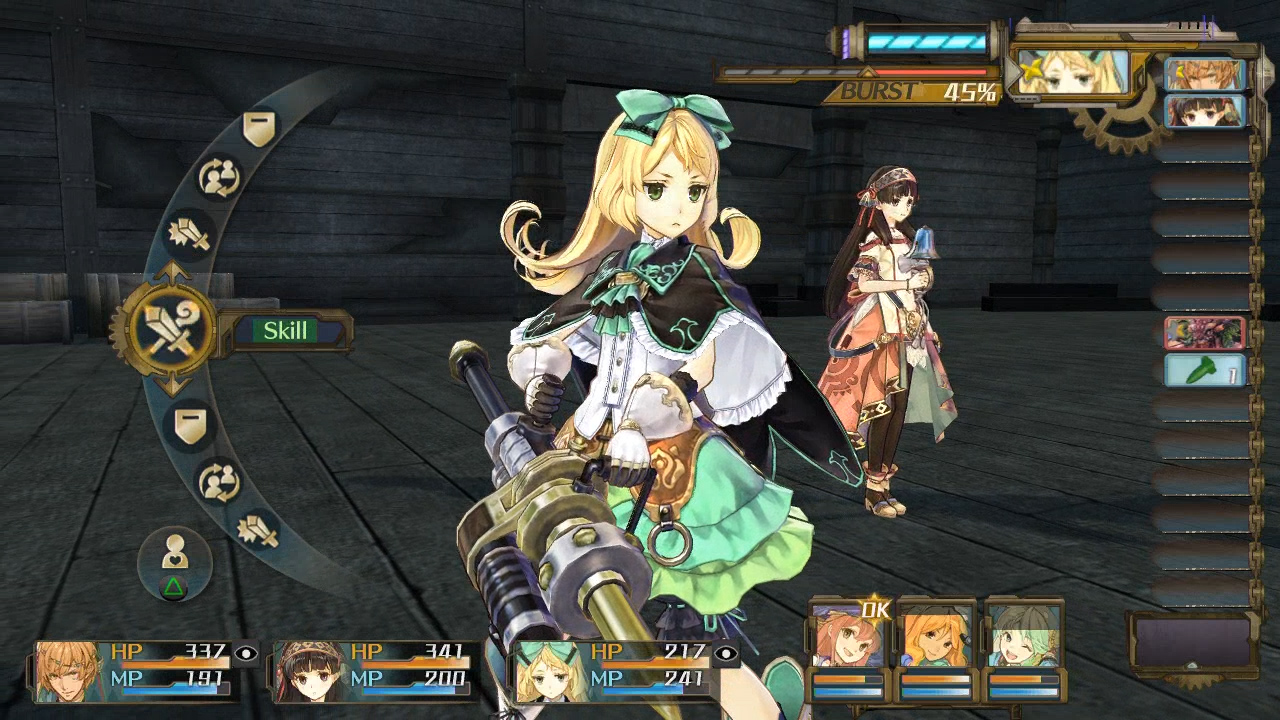 Above: A battle scene featuring Miruca, a cranky but helpful character.

Two storylines that weave together

Atelier Shallie gets its name from the nicknames of its two heroines, Shallotte and Shallistera. Players can choose between the two ladies to start down the path of two separate stories. One is a princess that has traveled to the last surviving town to try to save her kingdom, while the other is a young alchemist that barely gets by on odd jobs but dreams of doing something much bigger with her life.

While the lives of the Shallies certainly intersect, and their end goal of saving their world from the impending Dusk is the same, they’re different characters that have their own motivations. But if you’re watching closely you’ll see behind the curtain. Single scenes pull double duty across both storylines — a shared name makes this easy. Even with the overlaps, the tone of each is different enough from the other, which has the game doubling up on replay value.

A delight to explore

All of the Atelier games have been a visual treat. Highly detailed character designs look just like concept art, which is no small feat a studio of any size. To achieve this effect, the characters and world are painted in pastel colors, done up in a cel-shading style for a look that seems like it popped right off the paper and into the game. Those that have followed the series will notice that Gust’s art crew improves the quality of its work with each release. That team puts forth their best work yet in this release.

And it’s easier than ever to have a look around at that world now. While you’d think that a freely controllable camera for a third-person adventure game would be a given, Atelier Shallie is actually the first game in the series to feature it — a welcome addition.

Finally, Gust has rolled out a world that is much larger and more inviting for exploration than any of the previous games. It’s a nice compliment to the game’s more mysterious tone. 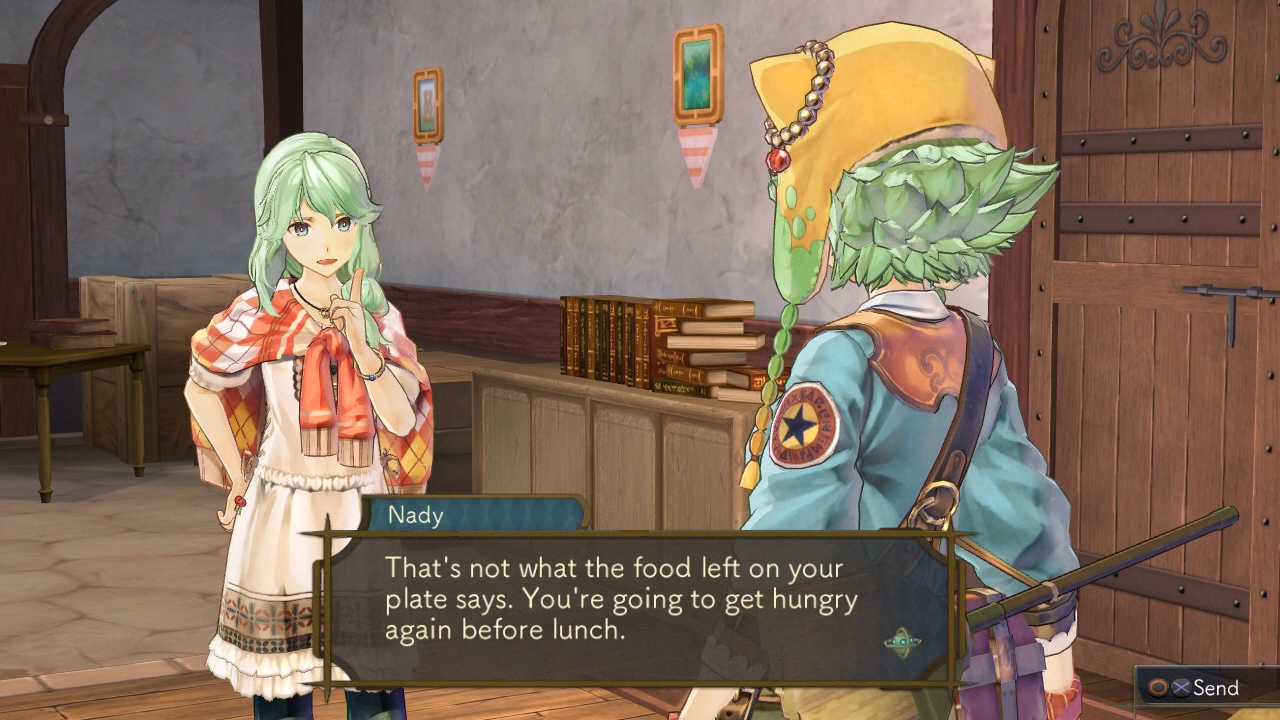 Above: Shallie’s mom, Nady, is full of helpful guidance. And nagging.

You’re never at a loss as to what to tackle next in Atelier Shalle with its internal checklists. A literal cross-section of either Shallie’s head is available at any time by pressing the Select button. From there, in what the developers call the Life Task system, you may check in on the progress of tasks. After meeting each chapter’s prescribed levels of exploration, alchemy, and fighting, progression to the next chapter is permitted.

This is quite a departure from the rest of the series, where the player was always up against a timeline. Shallie lets you explore at your leisure, and it never has you watching a clock or calendar. The Life Task system replaces these, and in turn frees the player up to tackle the game at their own pace.

The soundtrack for Atelier Shallie is every bit as delightful as its visuals. Big-budget (or at least expensive sounding) orchestral numbers and underscore the bigger set pieces of the game while lighthearted, melody-driven pieces perfectly match their assigned locales. All of the character themes are sweet and touching while the battle themes are powerful and exciting. The huge variety of song types matches the game’s varied experiences perfectly. The score is a treat for the ears. 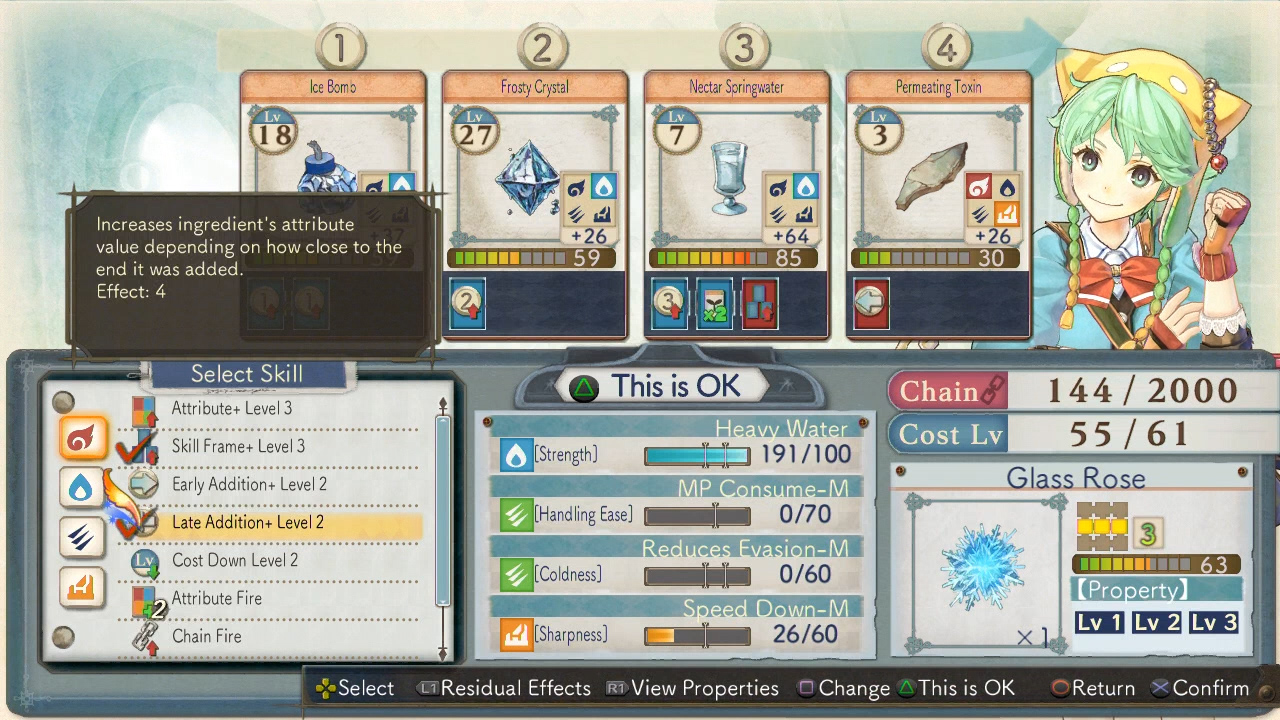 Above: If you think this looks complicated … you’re right.

Crafting isn’t for everyone

If you’re not into crafting items as a gameplay mechanic, you’ll want to pass on Atelier Shallie. Unlike other role-playing games, crafting isn’t just some subsystem — it’s the heart of the game. This means that you’ll be exploring, gathering, refining, collecting recipes, and putting things together for the majority of the game. Experience earning through crafting is prioritized over monster battling, which makes it unique among Japanese role-playing games.

The crafting system is easy enough to take in at first, but more complexities are folded in as the game progresses. Previous versions of this system were hard to understand at times, though Gust has made several improvements for this release. Still, this still has a lot of menu navigation.

While the battle system of Atelier Shallie is enjoyable with its lovely visuals and snappy command input, it’s still a bit thin compared to the systems of previous games from the Dusk arm of the series. It’s just tried-and-true turn-based encounters with little to no strategy requirements outside the selection of attack types. A Burst system lets you earn fight advantages and use new skills, and attack assists open up after a few hours of gameplay to add a bit of depth to the battle strategy, but it’s still mostly attacking and healing. Again, the crafting gameplay is the true heart of this game.

While fans of JRPGs will appreciate the bright, colorful, cheerful tone of Atelier Shallie, it’s at odds with the story and setting, which is supposed to depict a world drying up and near death. The seas have vanished, and monsters have overcome the world, but it never looks like it. The problem starts early on: The story begins in the only healthy town left in this world, which is much too bright and cheery for the dark tone of the story. Even in the darkest corners of the world, cuteness reigns. Even the monsters are cute. The look, while outstanding, doesn’t match, and that has the story losing weight. 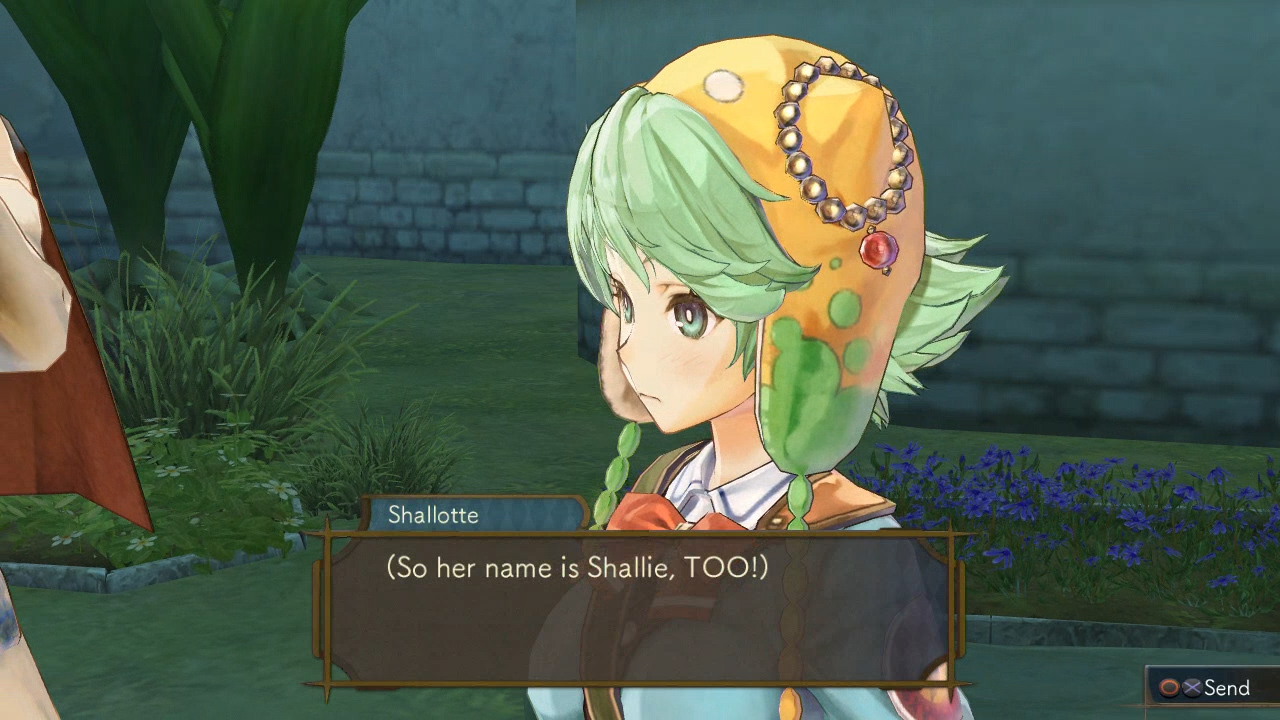 Above: The two heroines of Atelier Shallie share the same nickname.

While the industry seems to have moved on from both the PlayStation 3 and traditional role-playing games, Atelier Shallie: Alchemists of the Dusk Sea is good enough to bring players back. It’s less about breaking new ground or touting new features and more about just showcasing the things it does well. Great characters, a nice story, and engaging gameplay made for an experience that had me happy to unplug my PlayStation 4 for a bit.

This has a bit here for series fans, too. They’ll appreciate the improvements to the gameplay systems, and they’ll likely enjoy  some nods to previous games. Bonus character cameos from other Atelier games are smartly woven in to be more than just fan service.

New players should note that no previous knowledge of other series games is required to enjoy Atelier Shallie. It’s a good a time as any to see what this long-running role-playing game series is all about.

Atelier Shallie: Alchemists of the Dusk Sea is now available for PlayStation 3. Koei Tecmo provided GamesBeat with review code for the purposes of this review.