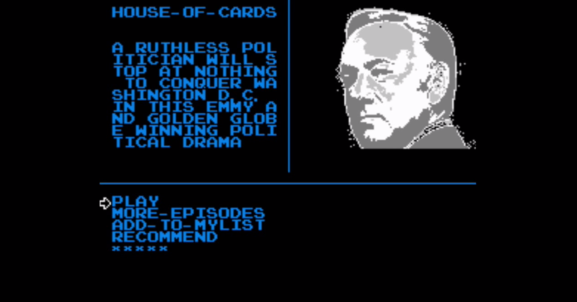 Browsing Netflix shows on the NES.

The mad scientists in Netflix’s engineering lab have come up with a way of streaming its videos to a 30-year-old gaming console.

Netflix now works on the Nintendo Entertainment System (via Polygon), which first debuted in the United States in 1985. The company got this crime against physics and nature working during one of its recent Netflix Hack Days, which it occasionally hosts to come up with new ideas that don’t have to have any practical purpose. The latest Hack Day resulted in Netflix engineers Guy Cirino, Alex Wolfe, and Carenina Motion developing what they call DarNES, a cartridge that enables browsing and streaming of Netflix video in very, very low quality.

“We took a beautifully shot 4k intro sequence and crammed it into a 1/4k display in 4 colors,” Cirino told GamesBeat.

Check it out in action:

Amazingly, this is Netflix working on an unmodified NES. This means that the Cirino, Wolfe, and Motion got their modern-day interface working on an 8-bit computer that struggled to display more than 64 colors at a time. And you can see that in the video above.

To prove that they can stream video, the engineers spool up an episode of House of Cards, one of Netflix’s original shows. As you expect, it looks terrible.