A strange looking communication and personal computing device, the Runcible, got a lot of attention when it was introduced at Mobile World Congress.

The device comes from a small San Francisco startup called Monohm. And talking to company founders Aubrey Anderson and George Arriola, a single theme kept coming up again and again: Monohm purposely limited the Runcible’s functionality. For instance, you may keep only eight contacts in the address book, it doesn’t play music, and it will provide directions, but only in the form of a single red arrow that points the way forward.

The idea is to not demand the attention of the user, but rather to allow the user to stay heads-up and involved in real life.

Reading Ian Parker’s profile of Apple’s Jony Ive in the New Yorker, I recognized some of the same ideas. Ive likes to talk about getting technology “out of the way” or being “pushed into the background.” For example, Ive said that he and his design team knew that notifications were a major feature of the Apple Watch, but decided to keep the messages short and simple to allow the user some freedom from the technology. 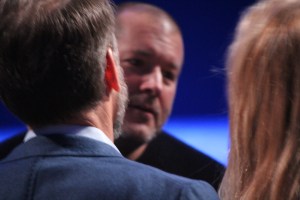 Here he is criticizing Google Glass: “They were intrusive, instead of pushing technology to the background, as we’ve always believed.” He went on. “We always thought it would flop, and, you know, so far it has.” Looking at the Apple Watch on his wrist, he told Parker, “This isn’t obnoxious. This isn’t building a barrier between you and me.”

We’ve heard for so long from handset makers how important it is to keep mobile users “engaged” in the experience of the phone. The details of the interface are all about holding the user’s attention, always offering some kind of content to consume. Audio and on-screen notifications seem to serve the same purpose.

The main screen of the phone has become extremely valuable real estate. Companies like Samsung and HTC have designed their own branded interfaces to ride on top of Android as a way of keeping the user’s eyes and mind on the phone maker’s brand.

And the interface is important for another reason. As margins on phones continue to compress, the real money to be made might be in selling pieces of the phone’s valuable (screen) real estate to app makers.

But this way of thinking might be on the way out.

In a world where people are fascinated by mobile devices, and spend way to much time gazing into their screens, it’s refreshing to hear tech thought leaders like Ive start talking about demoting tech devices to lesser roles in daily life.

Maybe we’re moving into an enlightened second phase in our relationship with gadgets. (This may happen concurrently with a transition from a tech device we carry to ones that we wear.) Maybe we’ll start judging the value of mobile devices on how well they enable real-life experience, rather than how well they replace it.

Maybe, like a good butler, the technology should be present when really needed, and nonexistent at all other times.