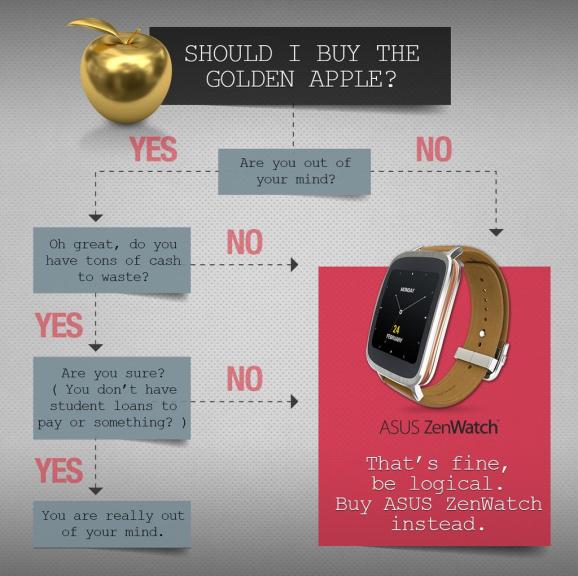 Tech companies criticize each other publicly all the time, with varying levels of subtlety and snark. Asus attacked Apple today by going after prospective Apple Watch customers interested in the $10,000-$17,000 Edition model.

Asus didn’t exactly go for the subtle approach, though the company did avoid directly referring to Apple, Apple Watch, and Apple Watch Edition. Instead, the company put together a flow chart for “Should I buy the Golden Apple” and then posted it on its main Twitter account:

Should you buy the #goldenwatch? Here's a handy shopping guide. #ZenWatch. pic.twitter.com/goI8fycMEy

The “shopping guide,” as Asus calls it, concludes in two options: “That’s fine, be logical. Buy Asus ZenWatch instead.” and “You are really out of your mind.” for those that keep answering positively to questions that would deter any sane person from spending five figures on a smartwatch.

Of course, the cheapest Apple Watch can be purchased for $349, which does not require being filthy rich nor a little insane. Still, the Asus ZenWatch costs even less, at $199.

Apple events sometimes lead to huge reactions from competitors, while other times they result in general quietness. Yet the Apple Watch Edition is controversial not just because it’s so ridiculously expensive, but also since it is likely to become obsolete rather quickly. We’re thus frankly not surprised that a tech company responded so directly.

Meanwhile, Pebble chose to announce the Pebble Time, and Motorola expanded its customization tool Moto Maker to the Moto 360. Asus was more eager to make fun of Apple fans.

Time will tell which strategy works best, though we don’t think calling potential customers crazy is the best approach. It is certainly hilarious, though.