I was taking a break during the Game Developers Conference to talk about virtual reality with a friend of mine and Bei Yang, Disney Imagneering’s creative technologies lead. As was inevitable, our conversation turned to the idea of the holodeck virtual-reality room from Star Trek.

“I have one of those,” Yang casually pointed out. 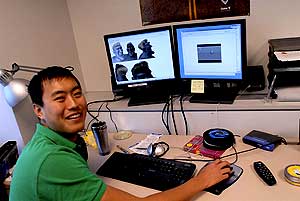 Above: Bei Yang at his workstation.

Disney is one of the few companies in the world that you might expect to have a giant room dedicated to virtual experiences. Still, I didn’t believe Yang until he pulled out the picture and explained it. He calls it a cave, which essentially means a room that does VR without putting a mask over your eyes. It’s a studio that has several 4K projectors beaming an image against a curved, 360-degree wall. It also has motion tracking so that the perspective of the world changes as you walk around inside of it. Disney uses this room to see what their theme parks will look like before they ever build them.

Yang jokes that photons are a lot cheaper than brick and steel.

This is just one of the many ways that the brains responsible for Disney’s parks use virtual reality.

“There’s a lot of stuff happening in VR right now, and Disney is very excited about it,” Yang told GamesBeat. “Because it’s another way for us to share our stories. We’re a story-based company. We’re all about building connections with people and sharing time with your family. VR is just another way to do that.”

A history of VR experimentation

Yang was at GDC to give a presentation on how the company uses VR,and how his team of imagineers plan to integrate it into the parks.

“We don’t know where it’s going,” he said. “But we know wherever it’s going, we have the luxury of being at the forefront of that because we’ve been exploring it for the last 25 years.”

Disney has experimented with virtual reality since the 1980s. This includes head-mounted displays as well as other kinds of ideas for VR. The company was heavily researching these ideas through the 1990s when consumer VR products hit the market, only to immediately fizzle out. Stuff like Nintendo’s Virtual Boy definitely soured Disney on the idea of a mask that goes over the eyes, but the Mickey Mouse company kept thinking about other solutions.

“If you look at yourself, as a human being, as an input-output device — where the the input is of course our senses — VR is really about spoofing those inputs so that you can immerse someone in another environment,” said Yang. “It’s really thinking about people as perceptual system rather than just looking at the hardware.”

That led the company to the aforementioned cave technology. This also resulted in things like Disney’s projection-theater experiences. Now, Disney is reaching back to those concepts to inform how to tackle today’s VR problems while also taking advantage of the latest breakthroughs. 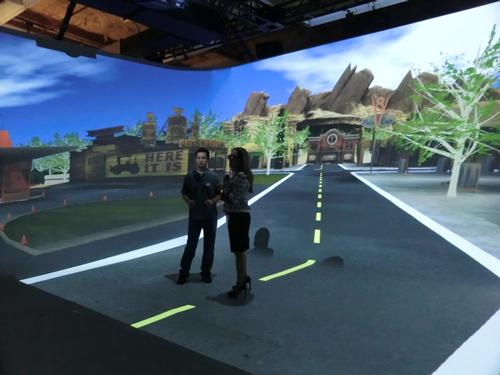 Above: Another look at a Disney “cave.”

“Digital projection is an example [of a breakthrough],” said Yang. “When we did Circle-Vision originally, there was no digital projection. So that was all about film and synchronizing the film together.”

Circle-Vision was a film-capturing and projecting technique that required operators to get nine cameras pointing out in a 360-degree array working in unison. This is an idea that The Walt Disney Company refined through the 1950s and ’60s.

“But now because we have digital projection and much more integrated image capturing, we can do much more seamless panoramic imagery,” said Yang.

Disney has also learned a lot from its previous attractions that it’s still using. Yang says Disney learned how to display moving video from something like the original Star Tours. That Star Wars ride had a moving room with a movie at the front that matched the motion. That kind of action can make many people feel sick, but Disney found ways to minimize the potential for discomfort. 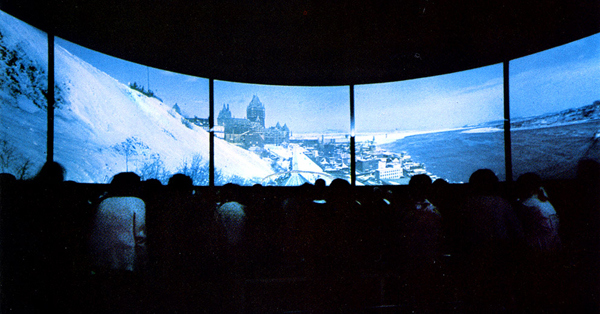 Above: Walt Disney’s old Circle-Vision technology was a precursor to the much more immersive projection experiences the company has today.

“That can never be 100 percent,” said Yang. “There’s always going to be people who get simulator sickness. But with all the learning we’ve had about how you can move and what are the limits and how we need to match the motions and visuals — those are all things we learned in the previous decades that are still applicable today.”

The end result is that Disney has a wealth of knowledge that it wants to apply in its parks. That will likely manifest itself as more cave-style experiences for attendees rather than head-mounted displays, but much of the technology required to make people feel present in a Disney holodeck is identical to what is needed for Oculus Rift. And Yang acknowledges that the practical level that game developers are working comes with many of the skills that are important for making attractions that will last forever. And Disney only wants to build things in its parks that will last forever.