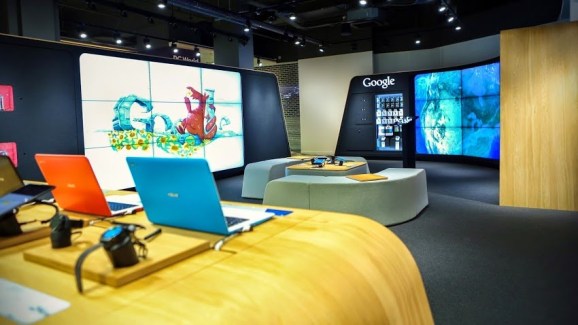 Google has long been rumored to be entering the physical retail space, emulating a number of other online companies’ efforts to bridge the physical and digital divide. Now it’s finally happening with the launch of the first Google-branded store in London.

However, the store isn’t a standalone affair that will sit alongside Harrods or Selfridges — no, the Internet giant is opening a store inside a store belonging to U.K. electronics retail giant Currys PC World, in the Tottenham Court Road area of the city centre, according to Google’s press release.

If this all sounds familiar, well, that’s because Google launched a similar initiative in the very same place — back in 2011 the company opened a Chromezone floor inside Currys PC World, but this was essentially an effort to sell and market Chromebooks, Google’s lightweight laptops.

This latest move sees Google come out with all its brand guns blazing, introducing a fully fledged Google hop. Here, staff will be on hand to sell, demo, and answer queries around Chromebooks, Android phones and tablets, smartwatches, and Chromecast. It will also give tutorials on some of Google’s main applications.

The store contains a large screen that lets users navigate the planet using Google Earth, while the so-called “virtual graffiti” wall allows customers to create their own Google Doodle. You can peruse a library of pictures from the new Google Shop here.

“We recognise the world of retail has moved on, and brands like Apple and Nike have been a big part of that, so we know that people expect more from their shopping experiences now, and we think this is our answer to that — a space where people can come and try all our devices and see all the amazing things you can do with those devices and have some fun along the way,” explained James Elias, marketing manager for Google UK.

“We think the time is right for us to launch this bigger store-in-store experience now that we have so many amazing devices — it’s a global first for us, and it’s all about creating a brand new and, we hope, very unique experience for our customers to try our devices and try the best of the web.”

There is no word yet on whether Google is planning to introduce similar stores around the world, but the company has confirmed two more in-store Google Shops will launch later this year in England — in Fulham (London) and Thurrock (Essex).

There has been a marked increase in online firms encroaching into the bricks-and-mortar realm in recent times, with Amazon making greater inroads through launching lockers in retail stores, eBay introducing quirky pop-up stores as well as Click & Collect in some countries, and U.K.-based online printer Moo.com launching a real-life presence too.

Besides its foray into Chromezones back in 2011, Google has also launched temporary pop-up stores called Winter Wonderlabs, designed to market Google products in time for Christmas. But with its latest launch in London, this marks an interesting new direction for Google as it looks to ensure its brand and products gain maximum exposure in the main shopping thoroughfares.