Nokia is finally launching its Here mapping and navigation platform for iPhone, three months after landing on Google Play for Android users, and a month after officially shedding its beta tags after three million downloads. The app will be pushed live later today, once Apple has resolved the technical issues it’s currently experiencing.

As with Here on other platforms, the iPhone incarnation brings offline maps for entire countries and regions, which should go some way toward tempting users over from Google Maps or Apple’s own offering.

While other apps offer offline mode for entire countries or regions, and Google lets users save small parts of a map for offline use for free, Here brings full offline functionality completely gratis, letting you download continents, countries, and in some instances specific parts of countries such as Scotland from the U.K., or Alabama from the U.S. 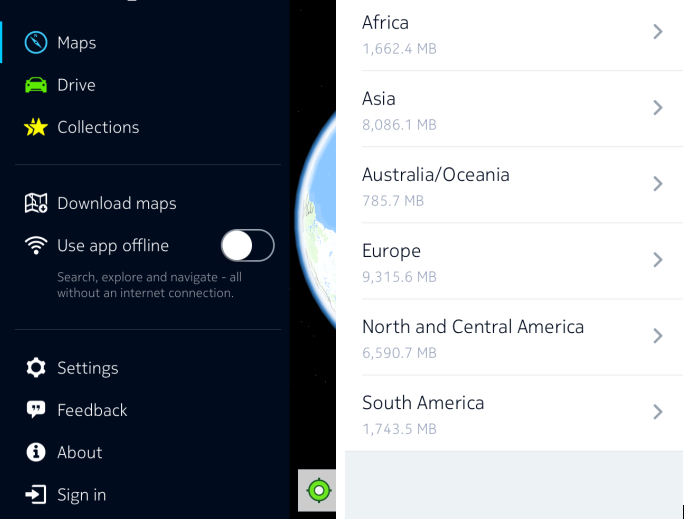 If you’re used to Google Maps, then you’ll find Here pretty straightforward to use — simply enter your “from” and “to” details, then you can see the route mapped out, or choose which mode of transport you wish to use — car, public transport, or foot. 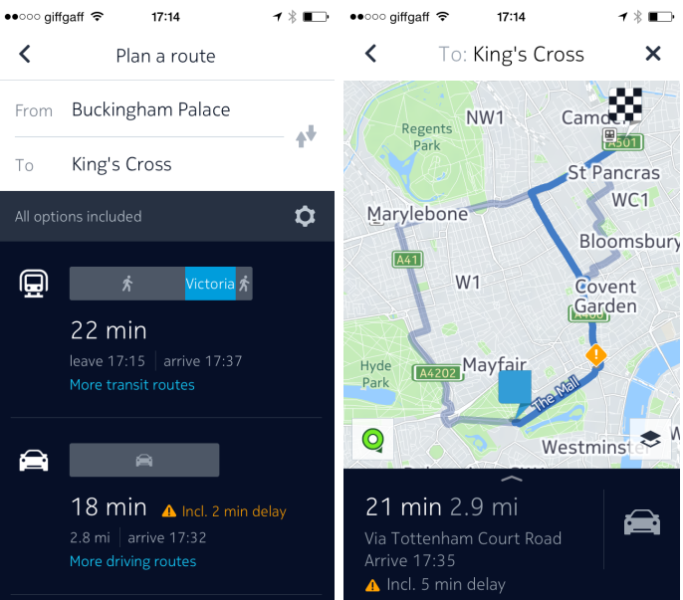 Above: Navigation in Here

The app also lets you build “collections” of places, which are basically groups of all your favorite places sorted by theme — this could be “pubs,” “family members,” or “museums” — which can be created and accessed from any device you login on, across Android, Windows Phone, iOS, and the Web.

VentureBeat has been testing the app out over the past few days, and can report that it pretty much has feature parity with its counterpart on Android — there’s little question that Here can put a significant dent in Google’s mapping crown, especially given that it comes armed with full offline mode for no extra charge. This means you can download maps to your iPhone and get full turn-by-turn navigation when abroad, or if you’re nearing any data limits on your home network.

There are a handful of notable omissions from the first version of Here on iOS however — for example 3D venue maps are nowhere to be seen. But these are expected to be added in future iterations.

It’s been a long road to launch for Nokia’s Here maps, having initially moved beyond Windows Phone and onto iOS back in 2012, before being pulled a year later due to compatibility issues with the newly launched iOS 7. The main crux of the problem for Nokia’s Here was a development error that meant when you pinched-to-zoom on a map, it created this terrible effect.

A lot has happened in the interim period though. Nokia has sold its handset business to Microsoft for starters, with Nokia subsequently focusing more on the software side of things. Here in particular has been making greater inroads into the mobile realm — Android and (now) iOS aside, Nokia has also been pushing Here onto the new Samsung Gear S Smartwatch, as well as Tizen smartphones and wearables. Elsewhere, Nokia has been striking partnerships with tech titans such as Baidu, with Here now powering the mapping capabilities of the Chinese Internet giant on both desktop and mobile.

As one of the four main global online mapping platforms, alongside Google, TomTom, and OpenStreetMap, Here already has a huge footprint around the globe, having previously struck licensing deals with likes of Amazon, Bing, Yahoo, and Garmin, while it’s a major player in the land of automobiles too — Nokia lends its maps to around 80 percent of in-car GPS navigation systems, including BMW and Mercedes.

Now that it’s available for iPhone users, Nokia can perhaps expect Here to get a little more mainstream traction among the mobile masses, adding to the four million downloads it has already garnered on Android.