Sometimes, the pressures of daily life can be enough to split you in two.

That’s exactly what happens in Sym, a puzzle-platformer about social anxiety that’s headed to Steam (for PC and Mac) this month. To cope with their overwhelming feelings — which appear as worrisome thoughts on the screen — players switch between two worlds, one dark and one light. Around them are hazards to avoid and careful jumps to make, which is enough to give anyone sweaty palms.

“I think a lot of people with SAD [social anxiety disorder] play video games, and a video game with this topic could help them to feel less lonely,” Sebastiano Morando, a programmer at developer Atrax Games, told GamesBeat in an email. “Also, when I was in high school, I was really shy, and talking with other people was a big deal, so from my own personal experience, I felt that I had something to say. It is not something you hear about every day, so I wanted people to talk about it and deal with the problem.”

For someone with social anxiety, dealing with the problem can mean fleeing from it, as I noted while playing a demo of Sym. The words that appear can be fearful, pressuring the player to “run” as the tiles behind them disappear, or they can be encouraging, saying things like “here I’m the ruler” and “nothing can hurt me.” Entering the dark world is like slipping into a cocoon where the player can hide, but both the dark and light worlds offer dangers.

“I read a lot of posts on forums frequented by teenagers affected by social anxiety disorder,” said Morando, “and it reminded me how I felt to be lonely and not be able to face social situations. I also read psychology books, but I wanted the in-game text to feel real, so I tried to stick more on the feelings/sensations side than to the scientific side. I wanted the player to feel like he was inside the head of someone with social anxiety.”

Screenshots of Sym show that these thoughts that narrate the experience become frantic and jumbled, adding to the nervousness of playing. 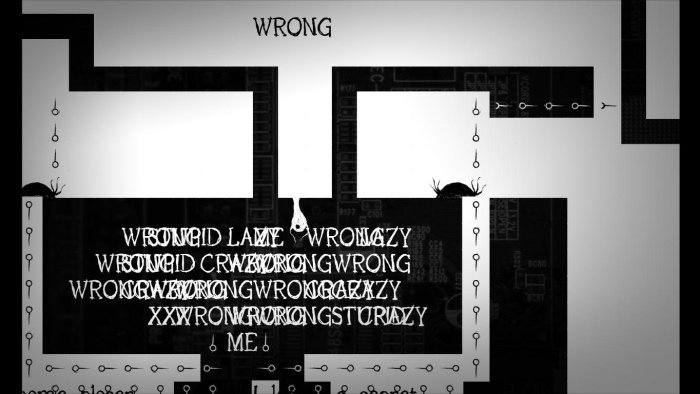 Above: Your thoughts can be your worst enemy.

“There are elements in game which create the feeling of social anxiety disorder,” said Francesco Lanciai, an artist at Atrax Games. “Plants symbolize the will of escape from what we feel like [is] danger, octo-dog symbolizes our untameable fears, flowers in the black world symbolize mental loops and mental traps. Levels are built to be claustrophobic, [and] to finish them the player must go into both worlds. There are some leaps of faith that represent the misleading lies of the mind.”

The puzzle aspects come from figuring out when and how to move between worlds. In the dark world, gravity is inverted, and you jump upside-down. You might go into one realm to avoid dangers in the other or simply to navigate the level. But you also activate tiles or symbols that make black blocks turn white, or vice versa.

“Black and white seems the simplest way to explain the struggle between the world outside — external — and our mind — internal,” said Lanciai. “… In our lives, it is normal to solve real problems using our mind, and someone with social anxiety disorder does the same, but external presences become problems.”

“There are two sides of it,” said Morando. “You can choose to hide or to fight it, but at the same time you need the strength of your inner world to fight the problems that you face in the real world. Black and white need to coexist: Without ‘white,’ you can’t see ‘black’ and vice versa. You need to use your mind to reduce the dimensions of the fear of the outside world.” 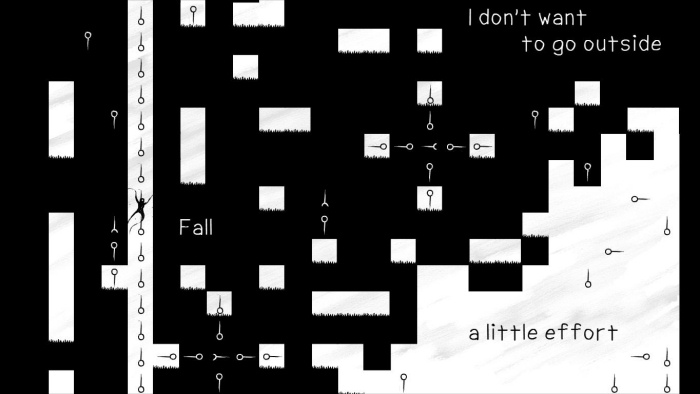 Above: Do you get less nervous or more nervous, knowing what’s coming?

Titles like Sym and Zoe Quinn’s Depression Quest, an interactive-fiction game about what it’s like to suffer from depression, might suggest that games are becoming valuable tools for exploring mental illness. But Morando isn’t sure whether he finds the trend effective or not.

“My goal isn’t to make an effective description of the mental illness but to make an ‘impression’ of it,” he said. “I don’t believe that a game could explain such a difficult topic, but a game can talk about it like any other form of art. I didn’t think of the game as therapy or something like that. I only wanted to talk about a topic I’m interested in and think is very relevant to a lot of people.” 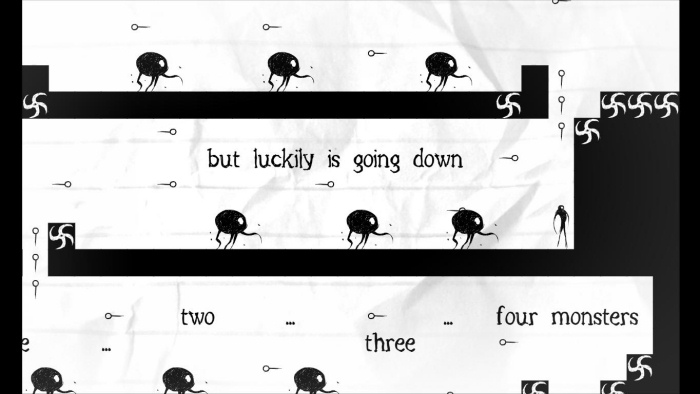 Above: The monsters you face come in different shapes and sizes.

That’s the thinking behind the level editor. It’s a strange addition for a game about mental illness, but one that Atrax Games hopes will deepen understanding and empathy.

“We don’t wish to teach lessons to anyone,” said Morando. “We want [people to be able to] teach something to us. The level editor is a way to explore the game’s mechanics possibilities and is a way for people to narrate their experiences — like a personal diary.

“Another thing we really wanted is that people can connect their level with levels created by other players — a way to connect and share, to open a door to other human beings, another way to face social anxiety and to be closer to other people.”