Apple has now held two events to introduce the new Apple Watch. We’ve seen a lot about the materials, the prices, and the bands, and we’ve seen how a few of the apps work. But we’ve had but a few “glances” at how the set-up and app downloading process will work on the Watch.

I perused the Apple developer pages, talked to Apple, talked to some WatchKit developers, and downloaded the Watch app in iOS 8.2. After doing that stuff, here’s the picture I have so far. 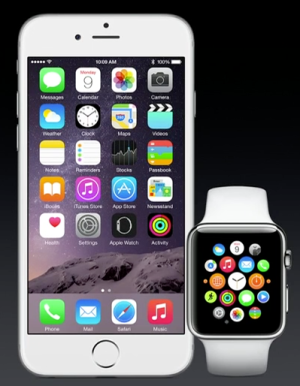 To make the apps that run on the Watch, app developers use a software developer kit from Apple called WatchKit. WatchKit lets the developers “extend” the behavior of their existing iPhone apps to the Watch. When you download a new iOS app — or an update of one you already have installed — to your phone, iOS will prompt you to install the WatchKit app if it detects that an Apple Watch is present.

But before any of that happens, maybe before you even buy a Watch, you’ll download iOS version 8.2 to your phone. This installs an Apple Watch app on your phone, and makes the phone ready to interact with the Watch.

The point of the Apple Watch app is threefold: It gives you more information on the Watch to help you decide which one is right for you, it walks you through the process of pairing the phone with the Watch, and it is the doorway to the Watch app store. If you already have your Watch, you power it up and the app will walk you through the pairing and set-up process. With your Watch powered up and nearby, you’ll first hit the “Start Pairing” button. 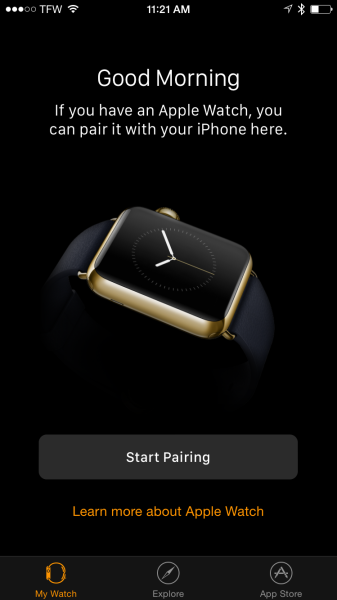 Then the app tries to take a picture of your Watch in the same way Apple Pay setup takes a picture of your credit card. But it’s still a little unclear how a visual image aids in setting up the Watch. Does the Watch display some unique image that identifies it as the only device that can pair with the phone? I suppose we’ll find out later. If the picture doesn’t work you can choose to pair the Watch with the phone manually. If you select that at the bottom of the screen, the next thing you’ll see is this: 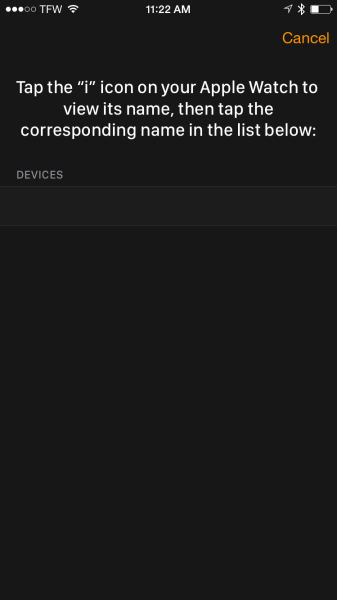 Looking at the published images of the Watch home screens, I don’t see any “i” icon, so I assume that shows up on the Watch once it detects that the pairing process is underway. Anyway, it’s just a way for you to discover your Watch’s unique name, likely a set of letters and numbers like WATCH03042. When you see that identifier on the list of paired items on your phone, you will choose it, and the two devices will pair.

You will also use this section of the app to set up which notifications you want, and choose your friends for the quick social connections activated by the button just below the digital crown on the Watch. (A screen shot of the notifications settings is not yet available.)

The Watch app contains a page full of marketing videos detailing the features and functions of the Watch. Apple says this is meant to help people buy the Watch that’s best for them. 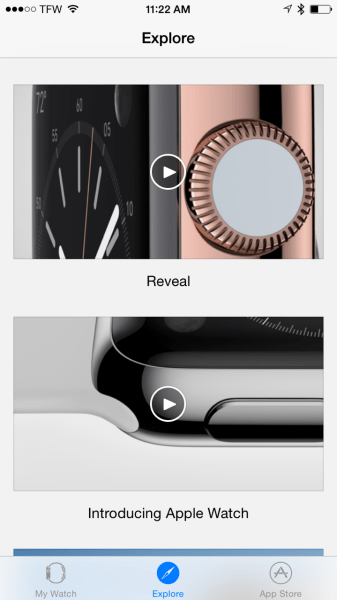 At the moment this is what you see when you click the App Store tab in the Watch app. 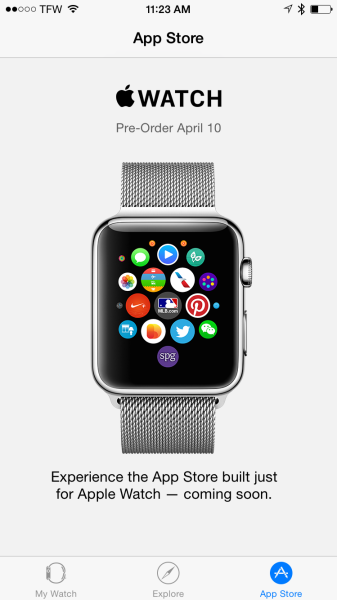 But by April 24 when the Watch goes on sale, the app will display something more like the below screen. You will never go shopping for apps on your Watch. You will order them up on your phone’s larger screen. 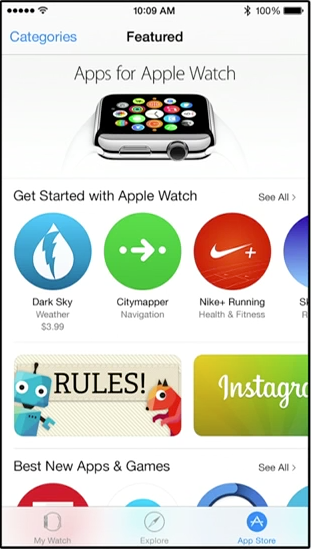 When you download an app for your Watch, what you really get is an app for your phone that extends certain functions to the screen of the Watch. This presentation is more limited, and (hopefully) simpler than the app on the phone.

Right now the phone app sends “glances,” or quick, read-only snippets of information, to the Watch. It also sends notifications, or messages that can be clicked to initiate further action. For example, a notification for a meeting invite might include buttons to accept or reject the invitation.

The below app (Urban Airship) has sent a notification to the Watch asking a yes-or-no question. 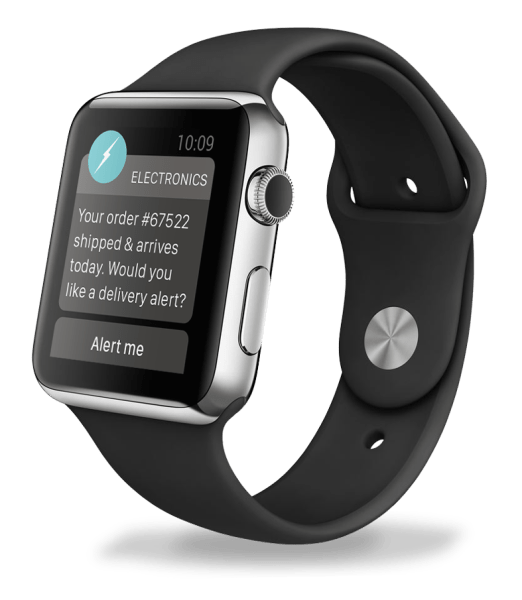 When Apple sends me an Apple Watch to review (which I’m sure will be any day now!), I will do a refresh of this little walk-through.