When I walked into 3D Realms’ private hotel room for a demonstration of Bombshell, the studio offered me a … slice of cake.

One of the developers was spending his birthday at the Game Developers Conference. I felt terrible for him, because no one wants to spend their birthday pitching to a conveyor belt of game-press goons.

Although the cake was for him, it could have been for 3D Realms as well, to celebrate the first steps out of an awkward transition. Interceptor Entertainment, the Danish developer that was working on a follow-up Duke Nukem project (Duke Nukem: Mass Destruction), turned around and bought the publisher. Duke Nukem: Mass Destruction, however, received a serious legal setback when Gearbox Software, the company that finished Duke Nukem Forever and retained rights to the franchise, called foul.

Although the team couldn’t make Duke Nukem: Mass Destruction, they had another idea sitting on the sidelines: Bombshell (due for release in 2015). Sometimes you can tell a lot about an artist based off of the work they do during a tumultuous transition in their life. So what does Bombshell say about 3D Realms? 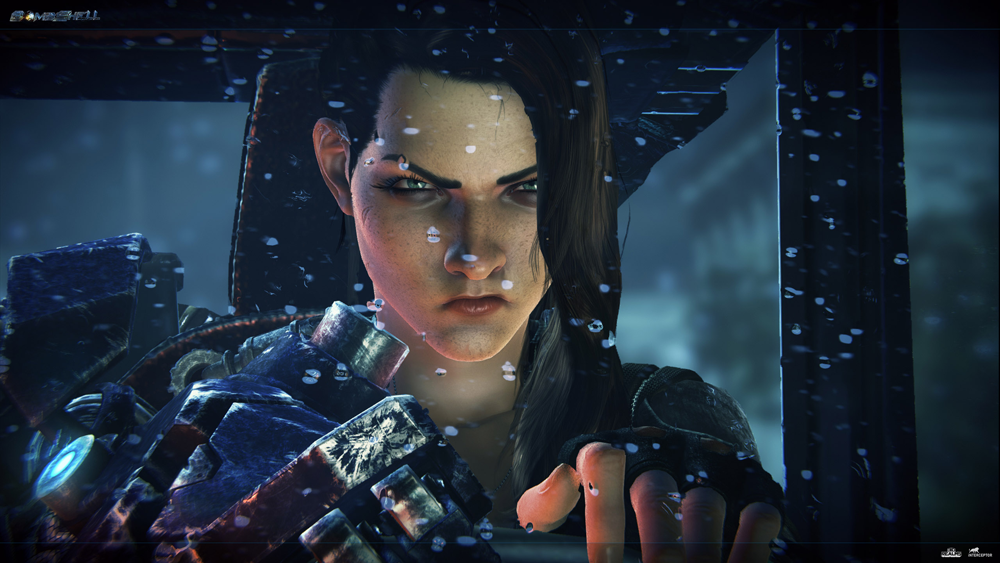 The narrative of Bombshell revolves around a female soldier-for-hire named Shelly Harrison. Shelly lost her right arm during a devastating attack known as the “Washington Incident.” After joining the private sector and gaining a special robotic arm, aliens suddenly attack Earth and steal the president of the United States (the president, by the way, is the daughter of Shelly’s commander).

Take a wild guess as to who has been called forth to rescue the president and save humanity.

I realize this all reads like the back of a 50 cent VHS tape, but during the demo the goofy narrative elements came off as a tongue in cheek homage of those old ideals of wild sci-fi action, military fantasy, and bizarre patriotism of the ’80s and ’90s.

Then there is Shelly. I went into this expecting her to be portrayed as a chunk of robotic cheesecake, but she comes off as a hard-as-nails trope of the typical action hero (although I don’t remember hearing any bad one-liners). She seems to be tough as hell without tickling the polar ends of the cliche, where her sexual exploitation and manipulation is her power or that her toughness comes from a need to copy male behavior or defeat it. I’m not one to force artists to walk on eggshells or to portray the sort of characters I want, but given that strong female representation is such a hot topic, I found what I saw of Shelly in this demo interesting. 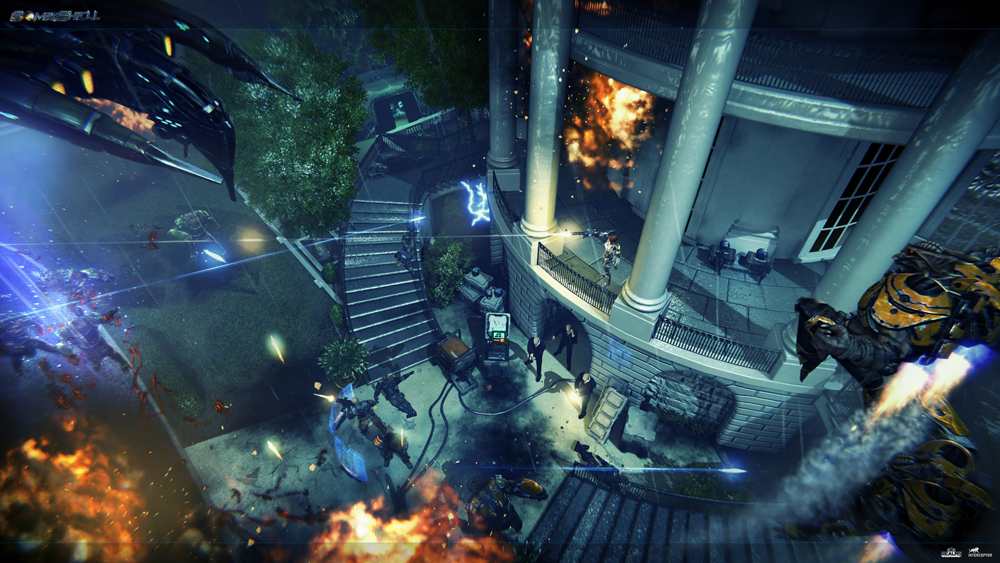 I’ve heard Bombshell’s gameplay described as an isometric action-role-playing game, but that’s way off the mark. It’s more accurate to call it a “top-down shooter.” Actually, it’s blatantly in dual-stick shooter territory, although the developers are primarily focused on mouse and keyboard support at the moment. They are really into this idea of making the gameplay like a first-person shooter, just with the top-down camera angle. So they have it set up so the mouse handles aiming and shooting, while WSAD keys handle movement and thespacebar is bound to jump.

I nagged Interceptor Entertainment a bit about controller support, since the game looks like it is begging for dual-stick controls. As of right now, controller support is still in the design phase. The primary focus is mouse and keyboard.

The role-playing aspect that people keep mentioning is actually a leveling system for Shelly and a tech tree for just about every weapon. This includes her robotic arm, which features eight weapon types that each have their own loadout of upgrades. So someone that enjoys blowing the crap out of stuff may want to level up the arm’s personal missile system, where someone that would prefer to waving a beam of death will spend experience points on the laser system. 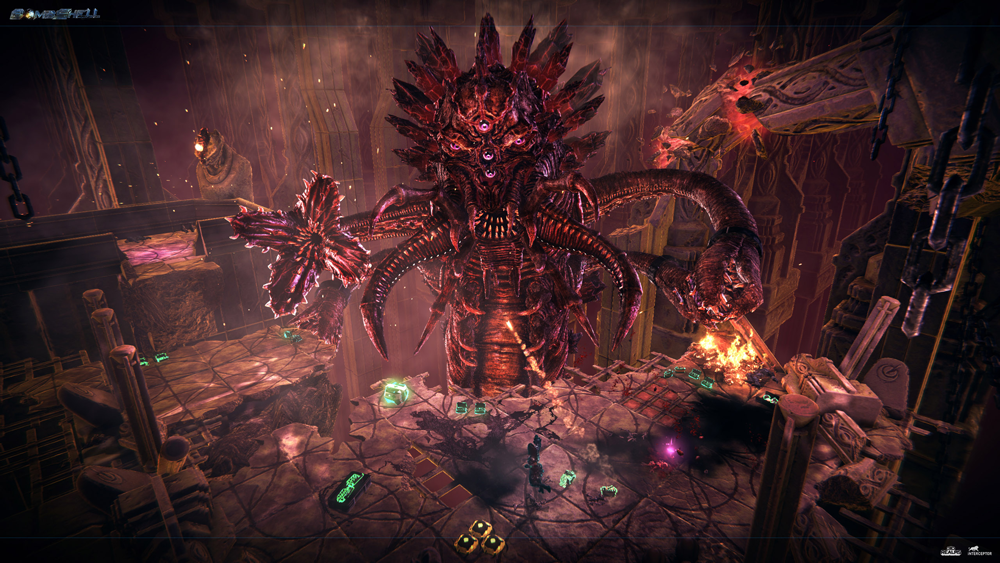 These weapons also have glaring weaknesses against different enemy types. Certain creatures will either have more immunity to specific projectiles or have a better defensive strategy against certain playstyles. This will make ignoring the jack-of-all-trades nature of the robotic arm, by spending points on just one style of shooting, very deadly for Shelly.

The adaptability of her robotic arm goes beyond just its weapons system. Shelly can detach the deadly prosthetic from her body, which turns itself into a roaming robot turret. While in this form, the arm will laydown cover fire. Shelly won’t be completely unarmed, as she will be able to use special smart explosives called bowling bombs and a triple-barrel revolver she’s named “Loverboy” (which also has its own tech tree).

As if this prosthetic did not do enough already, players can also switch between controlling Shelly and the detached arm. This will allow players to explore environments that Shelly otherwise could not.

As for modes, Interceptor Entertainment is focusing on the single-player campaign, which it estimates will take up to 15 hours. It is also working on a two-player couch cooperative mode, which will feature a second playable character. Although it wouldn’t reveal to me who it is, I have my guesses. I mean, it’s a game about an alien invasion in an action movie-like universe, by 3D Realms.

By the way, the cake was delicious 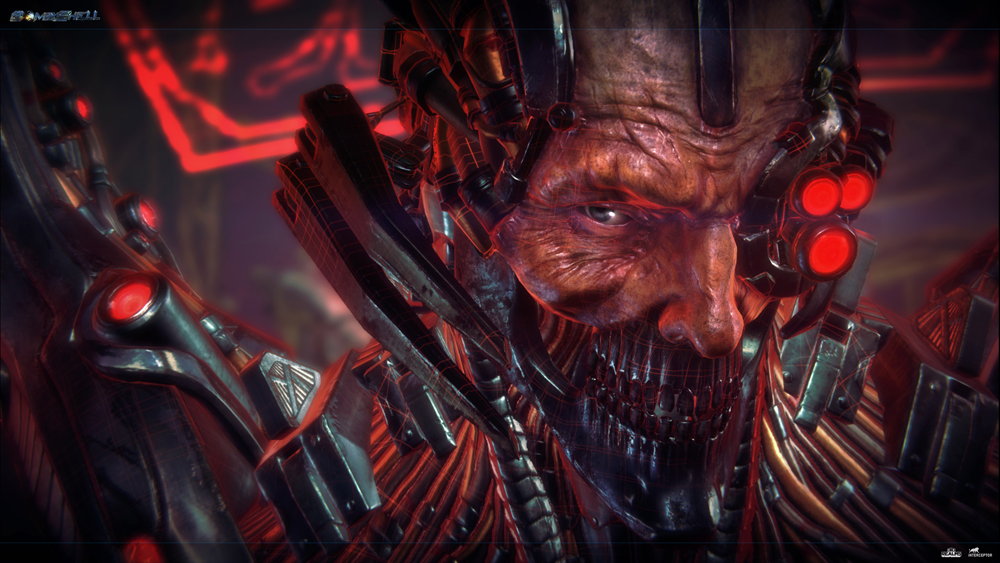 I have to admit that I walked into this demo with some negative prejudices towards 3D Realms. The Duke Nukem Forever situation tarnished the hell out of the brand, and the early trailer for Bombshell made them look like they were stuck in the ’90s. And I don’t mean in the good, intentional sense of taking advantage of that decades relevance in modern pop culture.

Which is why I am glad that the demo I was shown is a lot more refined than what I was expecting. Instead of a project that comes off completely out of touch with modern games, I saw a promising top-down shooter with a robust set of options, with a theme that skates the line between full-on parody and taking itself too seriously.

If Interceptor Entertainment can deliver on what I saw, Bombshell can be a promising first step toward this new era of 3D Realms. That’s something worth eating cake over.