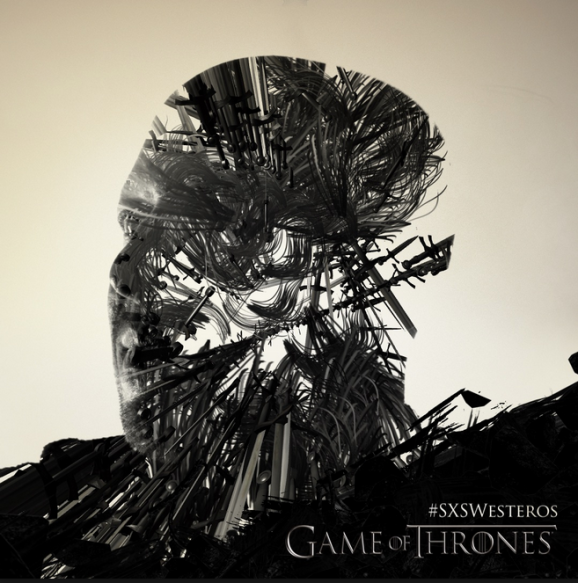 AUSTIN, Texas — Heavy is the head that wears the crown. Or at least the one that’s in the personalized Game of Thrones poster.

If you’re at South by Southwest (SXSW) this week, that can be you. It’s become clear that HBO sees this interactive, film, and music festival as a natural place to promote new seasons of its hit show, and so once again people in the Texas capital are lining up for a taste of the Westeros experience. Excuse me, the #SXSWesteros experience.

This time around, as the anticipation for Season 5 of Game of Thrones builds, HBO has set up a special interactive exhibit in a small building on Austin’s west side. Here’s the deal: You step on a stage, grab a wooden sword, and then smack the heck (hopefully) out of some spherical digital targets on the screen in front of you by swinging the sword at them. The idea is that as you destroy these targets, they explode, and Game of Thrones-esque imagery appears and fills a portrait of your face. The result is a perfectly personal Game of Thrones poster you can taunt all your friends with.

In a town full of interactive marketing, this may end up being one of the most popular. While I have yet to see how many people are really going to try to get Mophie’s St. Bernard to bring them power for their dying mobile devices, I think it’s safe to say the Game of Thrones tie-in is likely to be one of the big marketing draws during a festival crammed with marketing.

Having been to last year’s Game of Thrones exhibit here, where HBO showed off dozens of artifacts from the show, including dragons, swords, artwork, and more, as well as an Oculus-powered virtual reality experience that let visitors “climb” the great Wall of the North, I was eager to check out this iteration.

It’s pretty simple. But after talking with Lisa Walters, a senior producer at Red Paper Heart, the interactive creative agency that HBO hired to build the new “generative art” exhibit, I came away with an appreciation for the technology behind it.

I had assumed there was a Kinect — Microsoft’s gesture-control system — somewhere that was translating people’s movements onto the screen. But Walters told me that her team had actually embedded accelerometers and gyroscopes in the wooden swords, and that as people swung them, those sensors wirelessly translated the data to computers that then determined how destructive the swings were.

The harder and more accurately you “strike” the targets, Walters explained, the more Game of Thrones “assets” appear — things like wolf fur, dragon claws, raven claws, and swords. Definitely swords. Having played a bit of baseball in my life, I felt comfortable swinging the sword, and in all modesty, I think I did a little better than some of the others I saw try this out. I got a lot of sword imagery in my poster.

Walters said that HBO came to Red Paper Heart asking for an interactive installation for South by Southwest and in the end her team put the project together on a tight deadline of about seven weeks.

Although the project is simple, Walters was proud of the fact that the team had built the sensors into the wooden swords, and that everything was in real time. “Nothing happens without [the user’s input],” she said. “We don’t just hit a button and go. It’s very much user-generated.”

Heavy is the head that wears the crown. Or at least that’s in the @GameOfThrones poster. #SXSW #SXSWesteros pic.twitter.com/oL4wvc4Ex2

After visitors finish up on stage, they walk over to a nearby set of iPads, find their new digital poster image, and type in their email. The image is then sent to them. But Walters said HBO isn’t keeping anyone’s emails, and that people who want to share their image on Twitter or Facebook or elsewhere need to do so themselves. “We don’t want to share any of your information in a public space,” she said, adding that if HBO had asked “for that, I walk away.”

Instead, it’s “Where can we send your present?”

I asked her how many times she had gone through the process herself. Walters looked a little weary and said “hundreds.”

And is she good at it?

“I’ve gotten to the point where I’m a sword master,” she said proudly. “Watch my swing. I’ve got this.”