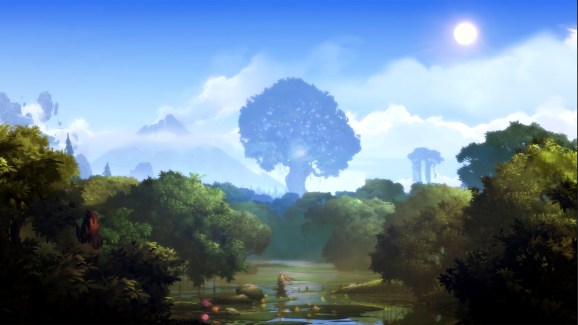 Ori and the Blind Forest is a gorgeous 2D adventure platformer.

Ori and the Blind Forest is a new platform adventure game for Xbox One, Xbox 360, and PC, and it’s one that gamers and critics are crazy about. Now, the developers are sharing some of the inspirations and ideas that pushed them through creating this instantly beloved release.

Moon Studios hopped on the Internet-aggregation site Reddit this morning for a question-and-answer session with fans. A number of the company’s developers answered queries about where their ideas originated from or the possibility for new features. Of course, fans couldn’t help but ask how the studio feels about the dozens of glowing reviews the game has earned.

“I was blown away by the reactions and reviews,” Ori lead artist Johannes Figlhuber wrote. “I still can’t quite wrap my mind around it. You work on something for such a long time and invest so much work and dedication, and it is just amazing to receive so much praise and so many positive reactions.”

That led others to ask about what inspired the world and story of Ori, which follows the adventures of a guardian spirit who falls into a forest. In those woods, a bear named Naru steps in to act as a stepmother.

“We got our main inspirations from classics like The Lion King,” Ori programmer Willem Vox wrote. “When we had a good basis for our story, however, we went and changed it a ton of times. Whenever we wouldn’t like an event, or when someone had a good idea to improve the story, we’d tweak it until we were satisfied. Quality is in iteration. The story is mainly the result of at least twenty iterations, and we’re happy that it turned out the way it did.”

Beyond the questions about development and the game itself, a number of fans took this opportunity to beg Moon Studios to do some merchandising. A common request was for plushie stuffed-animal toys based on the characters.

“I would also love to see Ori plushies. We’ll see what we can come up with there,” wrote Figlhuber.

“Before any of you get plushes, I want a Naru one,” Ori concept artist and level designer Simon Kopp wrote. “She’s so fluffy. I wanna die!”

Vox chimed in with an idea for a 6-foot tall Naru stuffed animal. “Just to lie on her belly and feel like you’re Ori,” he said. “I’d pay for that!”

After every came to a consensus on the plushies, Vox went on to address a question about the biggest challenge in making Ori and the Blind Forest. His answer? “Time.”

“Moon Studios is a pretty perfectionist bunch,” he said. “And that’s awesome, but that also means that when our time comes to shine, we often felt like we were not ready. This resulted in very late changes, and that’s not the best thing you can do in such a big production.”

The team went on to answer some questions about the future of Ori and the Blind Forest. The studio is working on an update right now to fix a few bugs. Moon is also considering adding some new features to enable completionist players to go back after beating the game — something that is not possible in the game right now.

Finally, several people asked the studio about the potential for a sequel, but the team evaded answering that question. That makes sense as they only just released Ori after years of development. They are probably all due for a vacation.