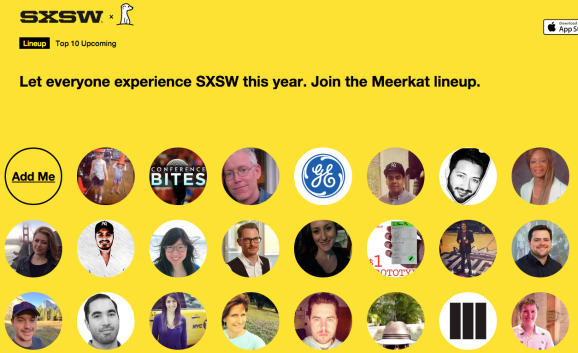 Updated March 15 at 10:25 PT: This story now includes comment from Meerkat and clarifies how Twitter’s change affects the live-streaming app.

AUSTIN, Texas — As South by Southwest (SXSW) kicked off this week, one of the hottest pastimes was live-streaming video with the new app Meerkat.

Meerkat director of community Ryan Cooley told VentureBeat that for those who signed up prior to Twitter’s move, things will stay the same — they will still get push notifications when Meerkat users they follow post a stream.

Still, Twitter’s decision definitely made it harder for some Meerkat users to know when others are streaming live. Twitter made its decision the same day it announced it had bought Periscope, a competing live-streaming app.

Given the immense power of having an app take off at SXSW — see Twitter in 2007 and Foursquare in 2009 — this was thought to be a big blow to Meerkat, at least in terms of its ability to get a huge boost among the concentration of tens of thousands of digerati in Austin the way it would have been had the social graph access not been disabled.

But that may have been mitigated, at least in the short term, by a couple of things. First, while Meerkat was already in the news a lot prior to SXSW, Twitter’s decision generated a huge amount of attention, drawing many new people to Meerkat. According to Mashable, Meerkat sign-ups grew 30 percent from its pre-SXSW level of 120,000 after Twitter cut off the app’s access to the social graph. Cooley confirmed that growth number to VentureBeat and said it may be even higher.

And for sure, a search on Twitter shows that there are no end of people streaming via Meerkat, from SXSW or elsewhere in the world, although what’s not clear is how many people are doing it once and then walking away, and how many are sticking around. A very unscientific examination makes it look like most people are trying it once or twice and then moving on.

But people who want to get something out of Meerkat need a way to find interesting streams to watch. Earlier this week, before Twitter made its decision, Meerkat posted a website on which it invited users to self-identify as being at SXSW. In other words: an aggregation of potentially interesting SXSW live streams.

Now, with Meerkat at least partially crippled, this website could be an end run around that unexpected bottleneck. It’s a one-stop shop for users wanting to find people who use Meerkat now that Twitter has forced that process to be manual.

What visitors to the site see is row after row of icons, each of which represents a Meerkat user with their Twitter avatar and their number of Twitter followers. Clicking one of the icons takes you straight to their Twitter page.

However, there’s no way to follow someone on Meerkat simply by clicking on one of the icons. Instead, it’s basically a list, and users wanting to see someone’s Meerkat streams has to follow them on Twitter, one by one.

It’s an awkward and inconvenient workaround, but it’s one way that Meerkat can advertise who is using it, especially among the influential people here at SXSW.

The real question for the app’s developers is whether it can continue to grow at significant rates, even after the attention that was raised after Twitter’s decision turns elsewhere.