This review has some limited story spoilers and focuses on the single-player aspect of Battlefield Hardline.

Battlefield: Hardline is a bold idea that blurs the lines between military and police combat in video games. And in the real world we live in, that idea isn’t so far-fetched anymore. Drug wars, gang battles, and well-armed organized criminals have made the streets of major cities seem like war zones, and as we saw during the protests in Ferguson, Mo., local law enforcement looks more like the military these days.

That premise is why Electronic Arts decided to extend its Battlefield modern combat series into a crime drama, where heavily armed cops square off against bad guys in bloody scenes that will remind you of Miami Vice and Scarface. You’ll experience the intense emotions of being a cop in a gun battle in a beautiful glass house or in insane car chases on the Los Angeles river. You stay wary of bad cops and interrogate suspects, always unsure how far to push the limits.

The idea also makes a lot of business sense, as Battlefield: Hardline will encroach on the turf of Grand Theft Auto, which has become the best-selling video game crime series of all time. Whereas Grand Theft Auto games are set in open worlds, Battlefield: Hardline has a more limited universe that has been built to tell a single story. While GTA games deliver variety, EA’s Visceral Games studio aimed to excel in narrative the way similar to a cops-and-robbers TV show.

For the most part, Battlefield: Hardline succeeds in fusing the multibillion-dollar military shooter genre with the multibillion-dollar crime games. It even includes of car chases that seem like they’re out of an EA Need for Speed game. I’ve played the prologue and 10 episodes of the single-player campaign, and I’ve engaged in a few hours of multiplayer fighting as well.

Steve Papoutsis, the general manager of EA’s Visceral Games studio, gets the description right when he says that Hardline’s single-player and multiplayer combat scenes blend speed, strategy, and story. For the most part, Visceral nailed these three major features. Making use of the Battlefield Frostbite engine, Hardline has a lot more destructible environments than other games in the category, and the A.I. of its enemies is pretty smart. The missions show off different kinds of police action, such as stealthy stakeouts to crime scene investigations. Each encounter always gives you the choice of going in and arresting bad guys in a nonviolent way or assaulting the criminals head-on. And if you really want to play the bad guys, you can do that in multiplayer.

The result is a well-executed, but sometimes flawed, entry in the first-person crime-shooter genre. 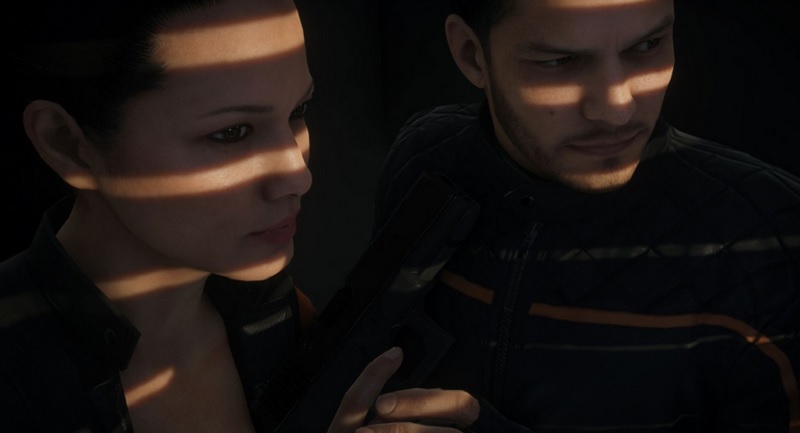 From the opening prologue, Hardlines seems more like a TV show. It focuses solely on the experiences of Nick Mendoza, a police officer from Cuba who wants to do good amid a corrupt police force in drug-torn Miami. Mendoza is voice-acted by the talented Philip Anthony Rodriguez, and motion-captured by actor Nicholas Gonzalez, and the animations that capture his performance are superb. He gets paired with new partner Khai Minh Dao (Kelly Hu), a hardened female detective who is familiar with Miami’s street thugs.

Their first car ride is a long one, but it lays the background for the story about a do-gooder cop in a tough police force amid a crime war zone. As the action unfolds, you have to follow Dao’s lead and learn the ropes in a stealth mission. You have to figure out how much to trust your partner as the evidence from your encounters points to dirty cops. The story isn’t about saving the world from nuclear annihilation. But it has good characters and good villains, with a number of plot twists. Mendoza learns some lessons along the way, like “the enemy of my enemy is my friend.” And he has to deal with his own temptations and why he became a cop in the first place.

The good thing about Hardline’s story is that the episodes are not random. They’re connected through these themes, though the locations and junior villains change quite often. The other characters fit the role you would expect to find in a police drama: a mysterious partner with a serious nature, squirrelly informants; funny sidekicks; arrogant officers and crime lords; and bosses that seem more like politicians. By the end of the game, the story returns to the topic of just how good or how bad Mendoza is as a person. And I like that. 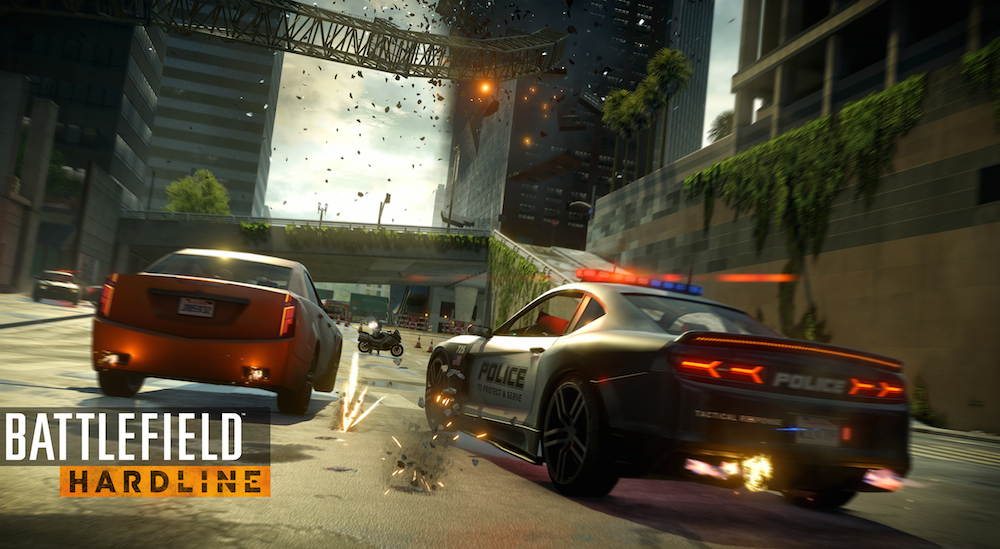 Above: In pursuits, damage can be dealt with firearms or vehicles.

A few scenes in Battlefield: Hardline are unforgettable. I had a ball playing some of the levels that take you to the top of a glass penthouse atop a skyscraper and another that involved a pool house with a ton of glass sculptures in it. You’ll race against a train in a car and lead a car chase through the concrete walls of the Los Angeles level. And there’s the time where a helicopter gets tangled with a zipline and whips you around the air like you were hanging onto a rodeo rope.

The destruction that is possible with the EA Frostbite engine makes these levels much more fun, as the glass windows collapse around you. I also remember an escape scene where you spend most of your time trying to evade being captured by those hunting you. In this case, you’re the mouse, not the cat.