Final Fantasy Type-0’s journey to the West has a timeline so long that it’s almost unbelievable.

It started as a Japanese mobile spinoff of Square Enix’s famed franchise, but after some retooling, it found its way to the PlayStation Portable in Japan. It held as a Japan-only title for several years, with Western fans stuck hearing about how interesting and different it is. As the PSP’s era came to a close, it seemed like we would never see a Western release. Finally, some four years after the original release and as a direct response to fan requests, an HD port comes to the PlayStation 4 (which I reviewed) and Xbox One. 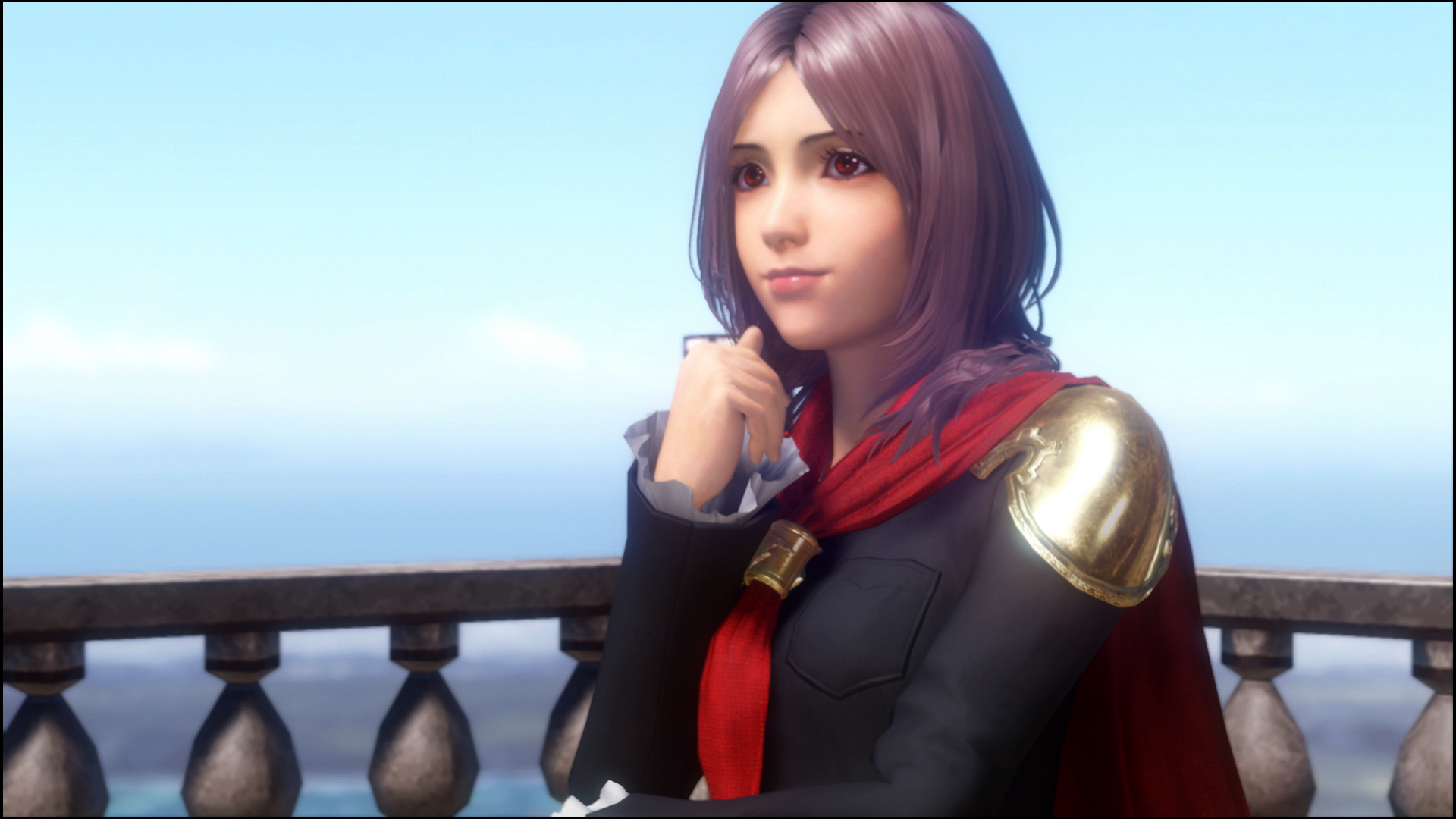 Final Fantasy Type-0 isn’t shy in showing you that it means to be different from other titles in the franchise. While other entries in the series might start out with scenes of soaring airships and birds flying against sunny skies, this one drops players right into a gritty world in the middle of a bloody war. Four nations fight for control over four holy crystals, sources of magic power. One nation in particular broke a peace treaty and mowed its neighbors over, and it shows no signs of stopping.

The experience opens with multiple murders and more bloodshed than I’ve seen in any other role-playing game, let alone any Final Fantasy title. This, combined with the militaristic themes and the gritty backdrops, was initially concerning. But I eventually found this departure to be refreshing, especially when compared to the most recent Final Fantasy offerings, which lacked the significance of earlier games in the franchise. More importantly, the tone really serves the story, giving it impact.

You’d expect a title like this to feature turn-based battling, but Type-0 is an action role-playing game, which means that you’ll be running, slashing, and dodging your way through waves of enemies. It’s no Devil May Cry or Bayonetta, but it does require some skills. Once you get the hang of its feel, it’s pretty enjoyable to run around freely during fights, and all of the varied forms of combat feel great. Fans of PSP title Crisis Core: Final Fantasy VII will feel right at home with Type-0 as the combat system seems to have come directly from it.

Even with its action focus, Type-0 is still a party-based affair, with three characters going into missions together. But you’ll only control one character at a time, while the other two are A.I. controlled. Four pre-assigned attack or defense commands are mapped to the controller’s face buttons, letting you execute them in real time along with player movement. Learning to dodge is key in this system. If you end up dying, chances are that it’s more on your reflexes and less on your strategy.

What makes Final Fantasy Type-0 unique is that it features an entire class of heroes instead of just one. A small group of gifted students from a single class in a magic academy serve as the playable characters, and you’re able to choose to control any of them at just about any point. And should your choice die, the other two in your party are available to step up.

The main appeal is that each member of Class Zero features a different type of combat and control. For example, class member Ace throws playing cards, giving him a light-powered ranged attack. On the other hand, Cinque carries a mace. She swings slowly, but when she hits, she hits hard. Some characters move really quickly, like the gun-slinging King, while others crawl so slowly that it’s almost frustrating, like Jack. It took me a few battles to realize that Jack is so powerful that it more than makes up for his lack of speed, and he has a defense rating that makes him even more useful.

It may sound excessive, but you’ll actually use all of the playable cast. Type-0 presents plenty of missions that have you working through 14 characters, picking ones that best match the combat situations. In the later missions, you’ll find that you’ll likely burn through the entire roster, just barely making it out alive with one or two members surviving. It’s like having 14 different types of lives to go into each battle with. 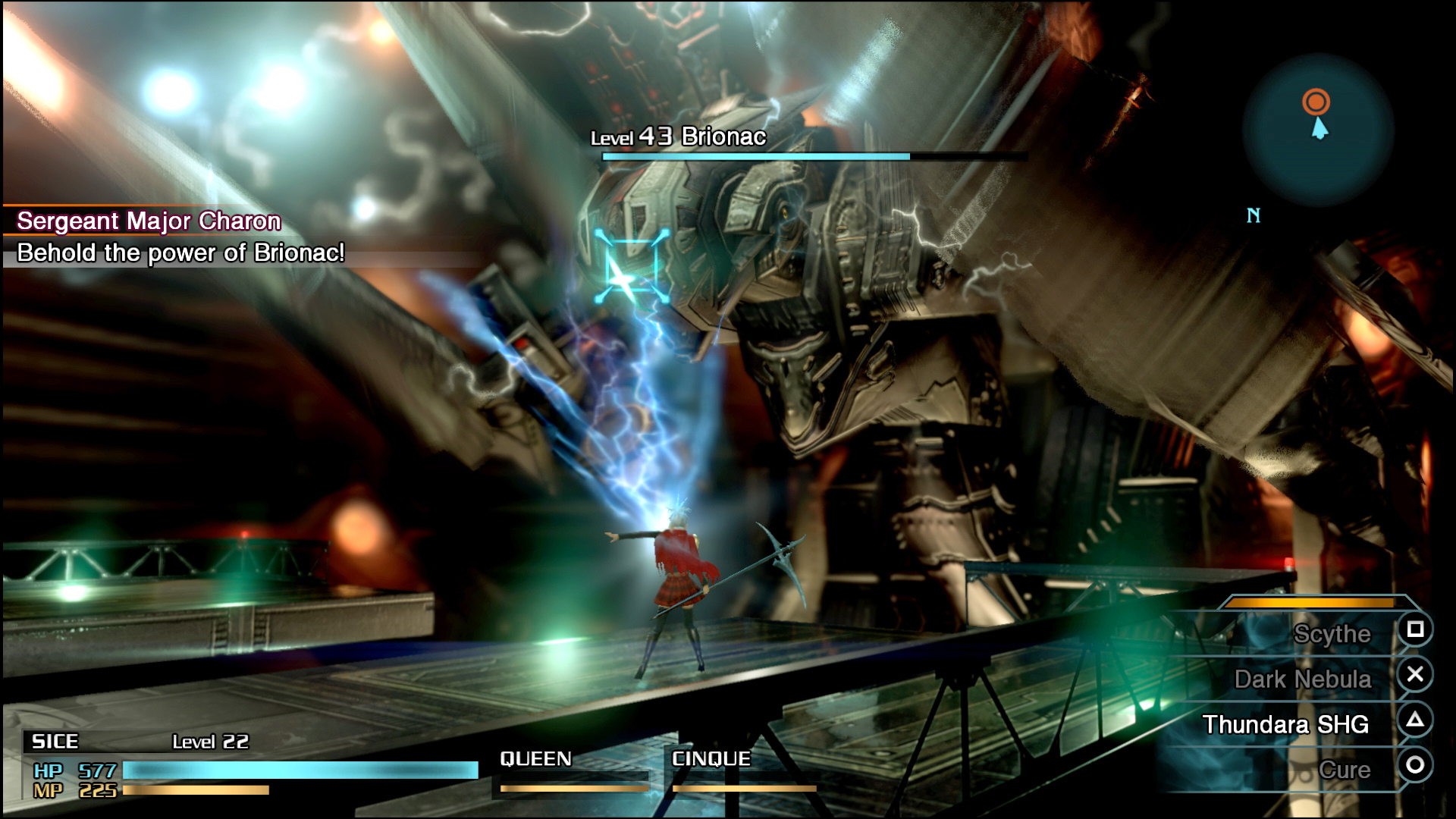 Above: Yes, it’s as difficult as it looks.

While Final Fantasy Type-0 leans heavily toward action, franchise fans will have plenty of hooks to strategize and tinker with. The magic system lets you level up skills using a power called Phantoma that you’ll recover from downed enemies. The system is deep enough that you’ll be able to increase specific aspects of a spell beyond its strength, giving you control over its cast time or range, among others. The load-out system lets you equip these spells to tailor your party before going into missions.

Beyond this, finding the right mix of party members to take into missions is equally as challenging. Digging to find the best combination of three and then working to optimally equip each party member for the challenges ahead served as its own sort of game within a game for this strategy geek.

Throwback to Final Fantasy’s past

If you’re a Final Fantasy fan, you’ll pick up on plenty of winks and nudges from the developers who made Type-0. This goes beyond plain fan service (though you’ll get plenty of that), with several story beats calling directly on notable figures and concepts from other Final Fantasy releases. Most notably, the battle system is straight from the other portable spin-off of the series, Crisis Core. You’ll see chocobos (and the accompanying theme song is great), as well as summons, airships, and overworlds — all as you’d expect. But Type-0 digs even deeper into the franchise’s history: the l’Cie beings from Final Fantasy XIII are primary characters as well. And wait until you see who Cid (every Final Fantasy adventure has a character named Cid) is in this game.

If you’re really looking, you find even more subtle nods to other entries in the series. The academy-of-students-as-heroes theme is straight out of Final Fantasy VIII, and the writers seem to play this up. They also have fun with the settings. One of the first missions looks just like a scene from Final Fantasy VI. I won’t spoil it for you. 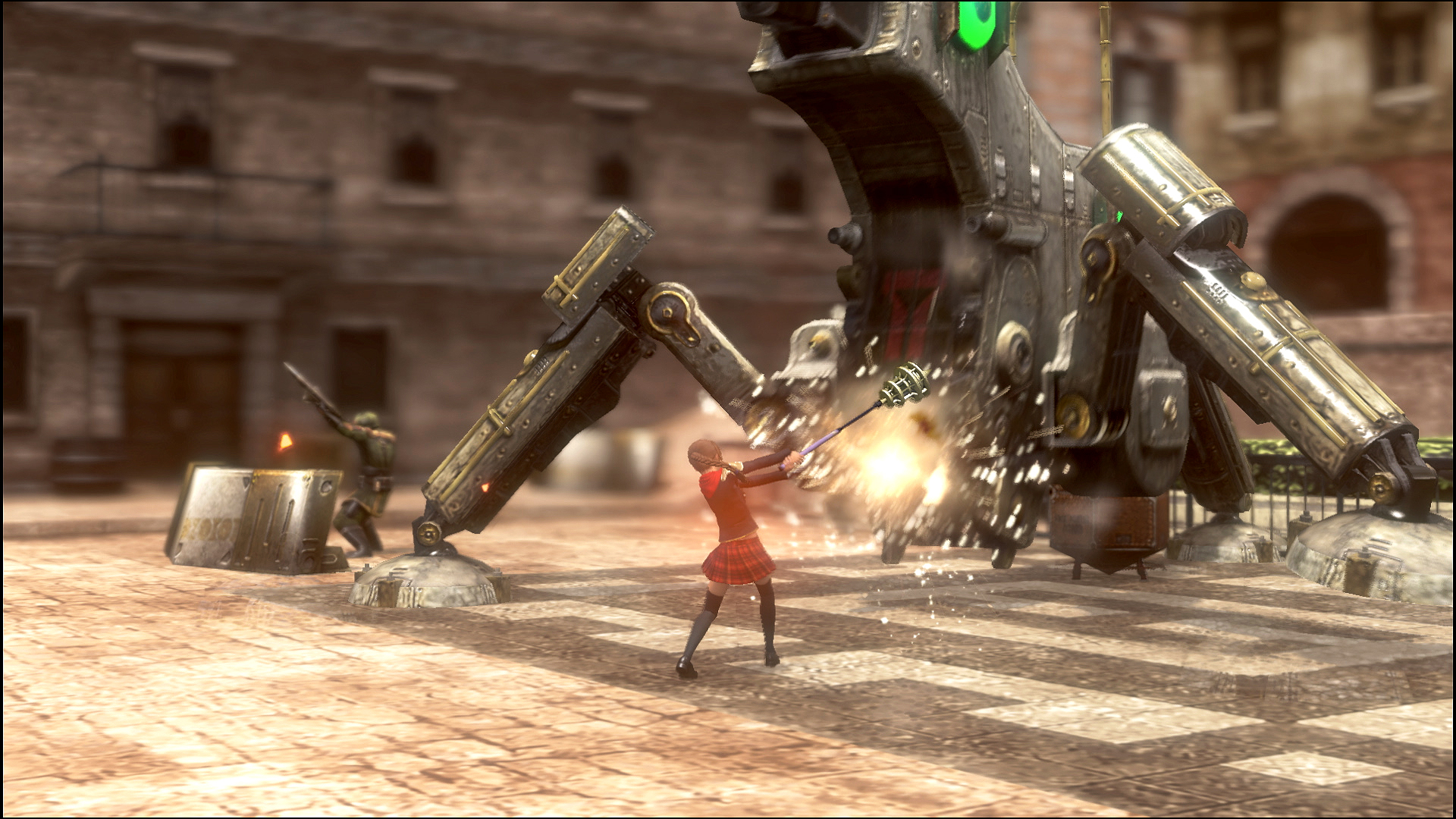 Above: The boss battles are the most challenging and satisfying parts of Final Fantasy Type-0 HD.

For as enjoyable as the story of Final Fantasy Type-0 is, it’s a bit difficult to settle in with all of the odd locale names and world-specific lingo the narrative throws at the player. It even rivals Final Fantasy XIII’s similar-sounding proper nouns (l’Cie and fal’Cie) with its jargon and too-large initial helping of backstory. Reading the dialogue was mind-numbing at some points early on. Hang in there. The game’s story is excellent and certainly worth working through these initial challenges.

Though you can take up to three classmates with you into a mission, you’ll feel like you’re on your own most of the time as the ally A.I. is messy and unreliable. Regardless of your level, you’ll find that they die for the worst reasons and often way too quickly. At their worst, allies will get stuck in geometry and stand stupidly, taking hits from enemies.

A neat support system lets random non-player characters drop in for a few minutes of support to sort of make up for the poor ally backing, but it’s hardly a fix for the bad A.I.

Too light on exploration

Type-0’s mobile and portable roots show in the lack of exploration provided. While the academy and its grounds have plenty in store to thrill players at first, that feeling dulls with each in-game day that passes. And you’ll work through a lot of days. Players can explore during downtime between missions, but that mostly involves covering the same dozen or so areas of the academy, talking to the same non-player characters over and over. It’s a good thing that a sort of fast-forward option exists to move right into the next mission.

The missions across the game’s world begin to feel like an escape from the halls of the academy, but this is not enough in the end. The world itself is huge, but it’s not varied enough. Towns have a uniform look, with little to no distinguishing features. Even the backdrops for battles begin to look the same after a while.

I love real-time strategy, but I don’t like it when it’s as rough and unpolished as the minigame in Type-0. The idea behind it is great: Send troops to capture surrounding towns outside your kingdom to expand your country’s control by way of map-based troop commands. The title lets you join in as an individual to support your units, too. But the controls for both the individual character and the military units are unwieldy and feel sluggish, to the point that it’s hard to be sure of what you’re doing. And should a base go down amid this confusion, it’s game over.

It’s hard to call out a game for graphical faults knowing that it started as a PSP title before making its way to the considerably more powerful PlayStation 4, but in some instances, the inconsistencies are so great that they distract from the story.

Overall, Final Fantasy Type-0 HD looks outstanding, but for every overly detailed and extra shiny shoulder armor close-up, there’s another full scene from a non-player character that looks as if was pulled straight out of a Sega Dreamcast game. Some of the backdrops are blurry and pixelated. It’s not uncommon to find dazzling, high-quality character models standing against very low-quality textured backgrounds. 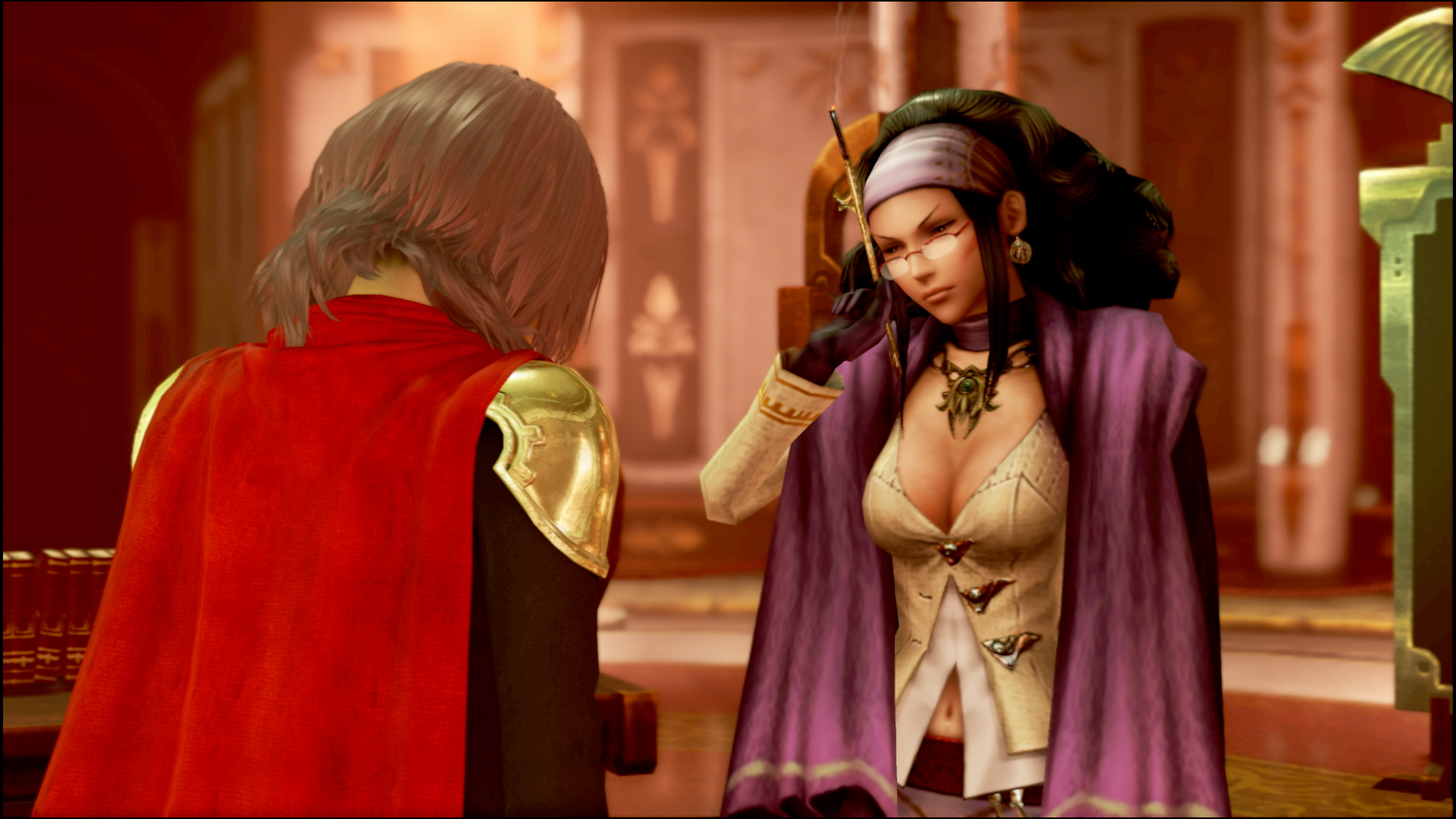 Above: This doctor is also your mom. Sort of.

Even as a series fan, I feel OK in saying that Final Fantasy definitely needed a shot in the arm. And it got one — a big, dark, serious one. It’s a bit strange to see this shot coming from something that started out as a mobile title.

Bringing such an interesting, varied, and challenging game to consoles was a great move by Square Enix for the franchise. It’s more Final Fantasy than any recent Final Fantasy game.

And hats off to the company for the royal treatment that this title got. Not only was it upgraded and upscaled to be fitting for release on the PlayStation 4, but the script, vocal performances, and related localization work are all top-notch. It’s clear that a lot of hard work went into making this the best it could be.

It took a long journey to get here, but Final Fantasy Type-0 HD is certainly worth checking out.

Final Fantasy Type-0 HD is out now for PlayStation 4 and Xbox One. The developer provided GamesBeat with a retail PS4 copy for the purposes of this review.