When I was 14, the coolest thing I made was a 2-by-4 piece of wood that had a wedge in it. I used it to take off my snowy or muddy boots without having to use my hands. I wasn’t crafty, but it turns out now all 14-year-old kids aren’t like me — at least when it comes to code.

Crazy Block is a new free Android game available right now on Google Play. It’s also the creation of 14-year-old Spanish girl Lucia Sanchez, who taught herself how to develop a game and released it earlier this month all on her own. She is the latest example of how open tools and platforms are enabling anyone with the will to make game and find an audiences.

Sanchez is from Alicante, a town in Southeast Spain. She’s a student, and — in addition to developing games — she’s into windsurfing, painting, and reading. Sanchez is also a web designer. We spoke with her to ask her more about Crazy Block, her process, and more.

“I started making games about two years ago, when my parents bought me a new computer,” Sanchez told GamesBeat. “I found on the Internet the story about a boy who was 14 years old and had created a game that had over a million downloads, so I though that was amazing and I wanted to do something like that.”

When Sanchez decided to get serious about pursuing her goal to release a game, she picked out a game-design tool called Stencyl, which is a code-free drag-and-drop game-creation kit. Many developers use when they’re first getting started, and some notable Stencyl releases include Flash game Mibibli’s Quest and Ghost Song, which is on Steam.

Sanchez chose Stencyl because she thought it was easy. Turns out that she was wrong.

“When I started using it, I realized how difficult it was,” she said. 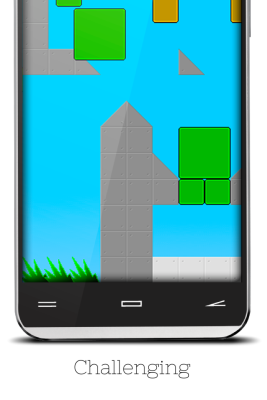 Above: A glimpse of Crazy Block from Lucia Sanchez.

Now, after running into any sort of difficulty is probably where I would’ve given up. But not Sanchez. Without classes and without a teacher looking over her shoulder, she pushed through and figured it out all on her own.

“I actually didn’t get any help,” Sanchez said. “The only help I had was YouTube videos and the Internet.”

Having a clear goal was a real benefit for Sanchez. From the beginning, she wanted to make something that she could release on phones. She understood the process and kept at it.

“It took me about two years,” she said. “And for me, the best part was designing the levels. I designed each level on a piece of paper before doing it on the computer. It was also a challenging part because sometimes it was hard to think of new levels.”

But again, she just continued working and eventually got to a point where she was happy with the experience.

“I decided to release Crazy Block when I felt I had a good amount of levels, and I had tested it many times,” she said. “When I released it on Google Play, I felt incredibly happy. I could’t believe it as I had been working on it for two years. Seeing my game in the store made me feel really proud of myself.”

So far, Crazy Block has not reached “hit” status. It is sitting at around 150 installs, according to Sanchez. And while the game has ads, she says it isn’t making any money. But she doesn’t mind that.

“I think what I have learned from making a game is way more valuable than money,” she said.

And what did she learn? Well, I’ll let her explain.

“Making Crazy Block for me was a great experience,” she said. “When I started with the game, it was really difficult for me as I didn’t have any experience with programming. Every time an error appeared, I didn’t know what to do. One time I even wanted to give up with the game, but watching tutorial, and with help from the internet, I came up with Crazy Block.”