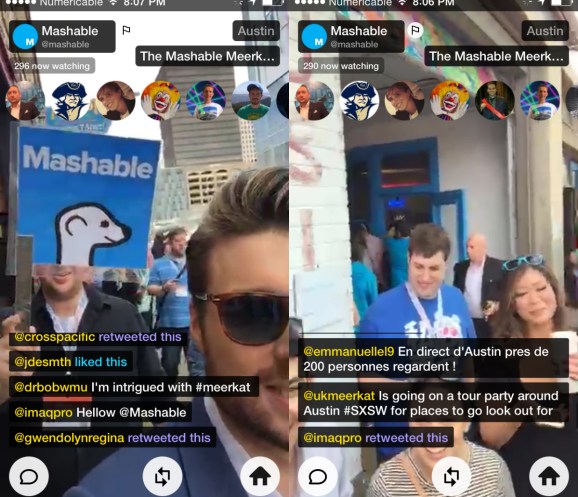 At this point in my life, when everyone starts hyping a new website or app or variety of organic lettuce, my reaction is to burrow deeper into bed and pull the covers up over my head, hoping that it all goes away. I’m too old to be trying to understand all this stuff. Honestly, Snapchat: I still don’t get it.

But following the mini-epic controversy over Twitter’s decision to make it harder for Meerkat to gain a gajillion followers in a blink, I figured I better download the app and see what all the fuss is about. It is now Monday afternoon and after a weekend of watching Meerkat streams, my eyes are still bleeding.

Just when you think you’ve discovered every awful aspect of humanity, along comes a new and innovative way to despise people you barely even know. Meerkat is that thing.

At some point over the weekend, I realized that the apocalypse can not come fast enough. As a species, humanity has run its course, and when the asteroid hits or the nuclear experiment causes Godzilla to rise from the bottom of the Pacific and devour us all, it will be a relief. Because there will be no more Meerkat.

Admittedly, it was probably horrific timing on my part to dive into Meerkat on the weekend of SXSW. Over the years, SXSW has become a place where tech-industry self-love has reached near-pornographic proportions.

Ever since that one time Twitter launched there and became a thing (if not a real business), every attendee apparently prays that another thing will break big at SXSW so that they can say, “I was there that year when (fill in the blank) took off.”

This year, Meerkat is that thing everyone at SXSW is hoping will be the thing they can tell their grandkids about, and as a result they can’t stopping yakking about it.

Perhaps the tipping point for me was watching Mashable founder Pete Cashmore Meerkat-ing around Austin. There was someone following him carrying a Mashable Meerkat sign. He kept asking everyone around him if they used Meerkat or knew about it.

At some point, several people came up to him and said they were Meerkat-ing him while he Meerkat-ed. I felt that at one point, the universe was on the verge of collapsing in on itself and all I could think was, “Good riddance.”

Above: Even the Hootsuite owl is Meerkat-ing now.

And then in the background, the Hootsuite owl mascot popped its head into the mix, and I began to sob.

Okay, I didn’t really cry. But you get the point. Having moved to France apparently hasn’t managed to put enough distance between me and SXSW. And now, there’s Meerkat rubbing my face in the depravity of strangers parading around deep in the heart of Texas waving their smartphones in people’s faces.

Why is Meerkat having a moment? I can only assume that it was one of two things.

First, it could be because the Twitter auto-follow thing was suddenly spamming people who then felt-digitally brow beaten into downloading the app.

Or second, there are a ton of people streaming live-porn on Meerkat, and since I don’t happen to be following said people on Twitter, I am not seeing it.

I suppose at some point, given time, people will figure out what to do with Meerkat and it might become the next Twitter, rather than the next Foursquare.

But as for me, I’m going back to bed. If civilization comes crashing down, please don’t wake me. Though I suspect you won’t since you’ll be too busy Meerkat-ing the rapture.