Vulcun.com announced today that it is increasing its 2015 prize pool for its fantasy sports tournament for League of Legends fans to $4 million.

With Vulcun, fans can assemble teams of their favorite e-sports players and bet real money in a contest. If their players do well in the League of Legends (LoL) Championship Season, the fans can then win real money. League is a multiplayer online battle arena (MOBA), where teams of players use their hero characters fight each other and destroy the opposing squad’s base, and it’s the most popular online game in the world, according to gamer social network Raptr. 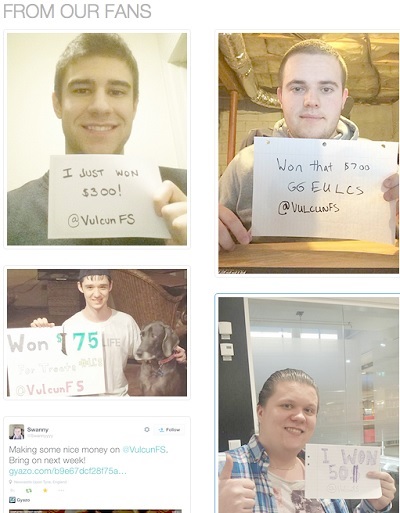 The League of Legends championship series has become the gold standard for e-sports, and the fan following for the pro players is becoming big enough to become a real market in itself, much like fantasy sports for real-world physical sports such as football, according to Vulcun. Vulcun has already paid out $400,000 in eight weeks since launching on January 19th, and it is now adding Dota 2 to its list of e-sports games.

The new prize pool is four times bigger than Vulcun’s previously announced $1 million prize pool, which was bumped up from an original prize pool of $250,000.

Ali Moiz, cofounder, said in a statement, “We had no idea that in just eight weeks we’d have a $4 Million prize pool. But the response from the LoL community has been so tremendous that it has blown us away. Active user participation allows us to grow our prize pools. We’re growing 10 percent each week.”

Imaqtpie, a former Pro player who played ADC for Dignitas, said in a statement, “Well guys now that they are raising the prize pool from $1 to $4 million guess my new job is going to be fantasy drafting LOL.”

Vulcun has daily free and paid contests using a salary-cap format. A user acts as a team’s manager, creating a roster of favorite players with a limited team budget. That roster then competes against everyone else’s on a daily basis. They can win cash if their teams do well.

Founders Ali Moiz and Murtaza Hussain started Vulcun.com. Vulcun has raised $1.3 million in funding from Silicon Valley investors including eVentures, Battery Ventures, and 500Startups. Moiz was the cofounder of Peanut Labs, a research startup that was acquired in 2011. Hussain worked at Peanut Labs, and he partnered with Moiz on startups for the better part of a decade.

Moiz said, “We promise to re-invest every single dollar we make into giving back to the eSports community.”