FiftyThree, the company behind popular drawing app Paper and a smart stylus called Pencil, has raised $30 million to help push its presence in the enterprise and education realm.

The New York-based company has made a big name for itself in the digital creativity sphere since it was founded in 2011, primarily for its virtual sketchpad app (Paper) — which Apple named as iPad app of the year in 2012 — and the accompanying stylus.

Up until last month, Paper was free to download, with users able to buy extra drawing tools for $0.99 in-app. But the company made the app entirely free, with FiftyThree betting entirely on its Stylus hardware. Perhaps not coincidentally, Pencil was actually made available for purchase in Apple retail stores around the world earlier this year, which was undoubtedly a major boost for its sales potential. 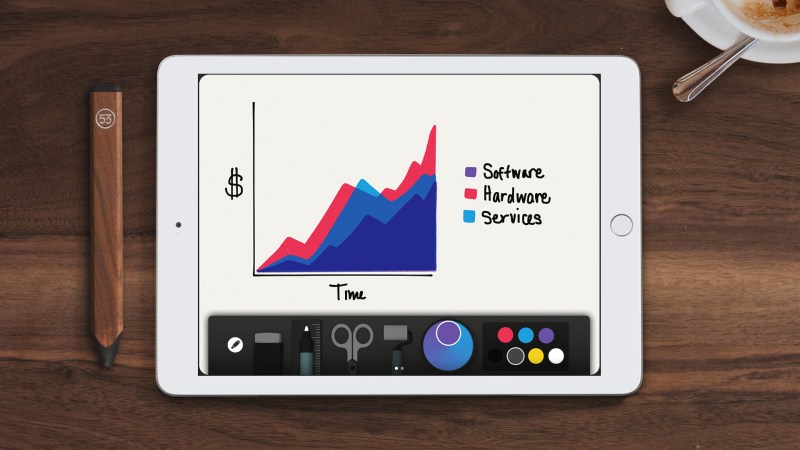 Above: Paper and Pencil

Today’s chunky $30 million round is in addition to the $15 million it raised back in 2013, and was led by New Enterprise Associates (NEA), with support from existing investors. Interestingly, Twitter cofounder Jack Dorsey invested in its previous round, but the company isn’t confirming whether he was involved this time.

FiftyThree has previously confirmed its plans to push its hardware/software package into the education realm, where the company has already seen significant uptake. When it announced its plans to make Paper completely free, Georg Petschnigg, CEO and cofounder of FiftyThree, said:

We’re excited about the amount of teachers and students who already use Paper and Pencil to give lectures or take notes. Making the tools free will also allow us to offer easier access to classrooms across the world.

But clearly the company sees a lot of growth potential in the enterprise too. “Our most common tools for innovative thinking — sticky notes, legal pads, and whiteboards — are stuck in the past,” said Petschnigg. “With this investment, we’ve accepted the challenge of bringing a new crop of tools for creative thinking to places where they matter most: education and enterprise. It’s about making creativity accessible to all.”

The company has also confirmed plans to launch a handful of new tools within Paper in April. It says it has developed something dubbed “Intention Engine,” which it calls a “breakthrough for pen and touch input that dramatically speeds up the creation of diagrams, charts, and presentation sketches.” This sounds like it might be a little like “SwiftKey for drawings,” with the app second-guessing your true intentions when creating graphics.

FiftyThree’s Paper has had north of 13 million downloads to date, and the New York-headquartered company has 53 (yup) employees in the Big Apple and Seattle.