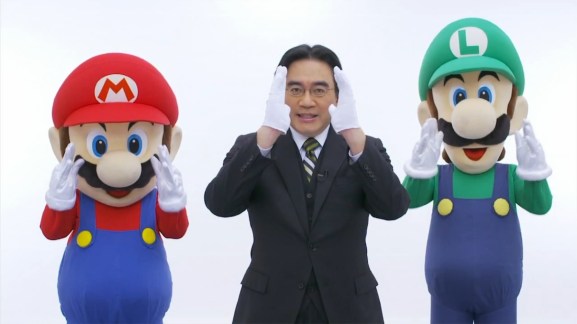 Nintendo president Satoru Iwata during one of his Nintendo Direct video events.

Back in November 2008, I warned Nintendo that the iPhone represented a threat to the dominance of the portable Nintendo DS gaming handheld. Seven years later, Nintendo acknowledged the threat by creating an alliance with Japan’s DeNA to make mobile games with Nintendo characters.

Well, Nintendo. I told you so. Before everybody else piles in with commentary, and before Nintendo really explains its actions, I had to say this. During the last seven years, mobile gaming on smartphones and tablets has grown to be worth as much as $30.3 billion market worldwide in 2015, according to market researcher Newzoo. And Nintendo has a zero percent share of that market. It has tested Pokémon games, but it has done little else to take advantage of the fastest-growing gaming market.

The storied Japanese game maker is now investing in mobile publisher DeNA and preparing to launch games using Nintendo intellectual properties. They’re also planning to launch an unspecified hardware platform dubbed NX. But it’s already late with this move. Nintendo is still making money, but it has lost a lot of market valuation. The 3DS handheld isn’t selling as well as the previous generation, the groundbreaking touchscreen-enabled DS system, and the Wii U home console is a distant third behind the PlayStation 4 and Xbox One.

Nintendo is so late to be doing this. It also comes on the heels of Sony ditching its PlayStation Mobile efforts. Stewart Rogers of VentureBeat’s research arm, VB Insight, is thinking along the same lines.

“It does, however, make more sense for Nintendo to make a move to mobile platforms. They have a younger demographic, and the ‘casual gamers’ attracted to Nintendo’s consoles are a better fit than the ‘hardcore gamers’ PlayStation courts,” Rogers said.

Back in 2008, it was clear that 99 cent games, and later free-to-play games, would gnaw at Nintendo’s handheld market share. Kids didn’t have to fork over $130 for a device, so long as they could get a hold of mommy’s or daddy’s iPhone. During these seven years, a whole generation of kids has grown up without Nintendo.

This year, mobile games are expected to exceed the revenues of the entire console software market, including the handhelds, according to Newzoo. Among the fastest-growing markets are Japan’s iOS and Android markets for games. Now, it’s not going to be easy for Nintendo to dislodge the top-grossing mobile games: Supercell’s Clash of Clans, King’s Candy Crush Saga, and Machine Zone’s Game of War: Fire Age. These are making hundreds of millions, or perhaps even billions, of dollars a year in revenues. They’ve got a lock on user acquisition advertising on mobile, and Mario might not be enough to break their hold.

“It might also be a better time to make this move. It’s estimated that the mobile gaming industry reached $25 billion in sales in 2014 — almost double, 42 percent, the revenue generated in 2013,” Rogers said. “According to Newzoo and others, mobile revenues will overtake console gaming in 2015, all of which bodes well for Nintendo at this point. With DeNA’s strong roots in mobile gaming, Nintendo are well placed to succeed where Sony failed.”

How could Nintendo have ignored this market for so long? Nintendo’s chief executives, from former chief Fusajiro Yamauchi to current boss Satorru Iwata, always believed that the combination of hardware and software resulted in the best games. Nintendo kept its franchises like Mario and Pokémon on its own devices. It saw Sega move away from hardware with the failure of the Dreamcast, and Sega’s own efforts to dominate the multiplatform console market with software failed. But that was the wrong example. If Nintendo had looked at Disney, Marvel, DC, and other big entertainment brands, it could have seen entertainment moving across all platforms.

Nintendo experimented with mobile games, but it never dove in fully. Now, with a million apps in the app stores and new mobile-first brands catching on, Nintendo has to give up on its innovator’s dilemma. It has to embrace mobile, even at the risk of dooming its own custom hardware, in order to participate in a market that now reaches more than a billion people.

It’s not too late. But it’s going to be a lot harder for Nintendo to carve out a piece of the market for Mario. I’m still optimistic that the company can pull of the transition. But it has to move fast, give up on old ways, embrace new learnings from companies like DeNA, and figure out even more alliances to participate in a global mobile gaming market.

I know that Iwata didn’t ask for my advice. And he sees a lot more than I can from my limited view. But somehow, he missed what almost every other person in gaming saw: that Nintendo needed to be in mobile gaming, and it needed to be there yesterday, not tomorrow.