Updated at 2 p.m. after the market’s close.

Your phones are finally getting Nintendo games, and Wall Street is thrilled.

Nintendo’s share price closed the trading day at $18.22. That’s up more than 27 percent compared to yesterday’s closing price of $14.29, and it represents a one-year high for the stock. Investors are excited about one of gaming’s most storied publishers moving into the lucrative mobile space. Smartphone and tablet games generated around $25 billion last year, and they’ll make more than $30 billion this year. Nintendo, with its recognizable brands like Super Mario and Pokémon, could snap up a huge portion of that market. This also pushes its market capitalization over $16.2 billion, which is nearly a $3.5 billion increase. 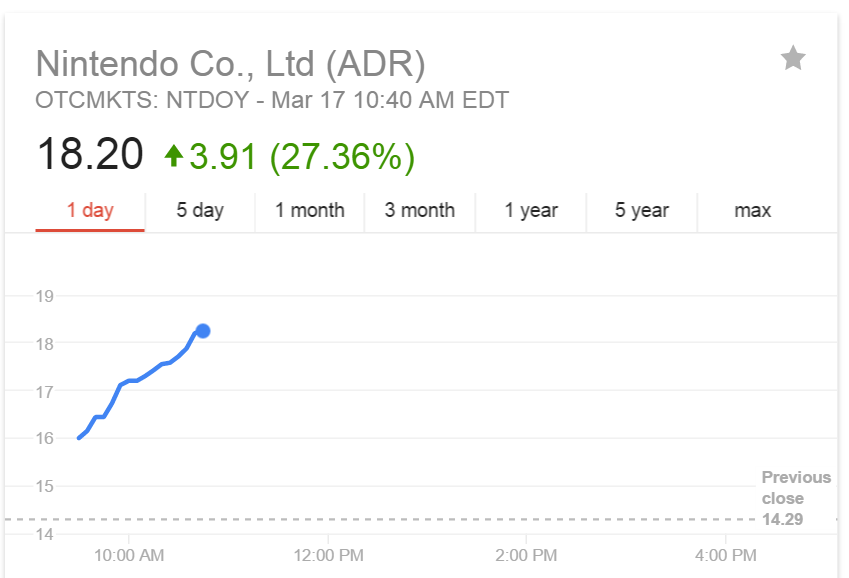 Above: Investors are loving Nintendo’s plan for mobile.

The publisher made the announcement earlier this morning that it would work with mobile gaming company DeNA on new games for smart devices. These apps will bring established Nintendo franchises to mobile, but it won’t port any existing console games to these devices. That means we are very likely to see characters like Mario, Pikachu, and Zelda on phones, but in original experiences custom tailored to touch gameplay.

Nintendo also recommitted to making console games. Company president Satoru Iwata announced the NX, which is the next iteration of Nintendo gaming hardware. He said they will talk more about it in 2016, but he wanted everyone to know that Nintendo is still a console gaming company.

This is almost exactly the kind of plan that analysts, investors, and others have asked from Nintendo. The publisher has struggled to turn a profit due to its Wii U system, which isn’t selling very well. For years, this has prompted people to beg Nintendo to make mobile games. Now that the company has finally given in, the market is rewarding it.