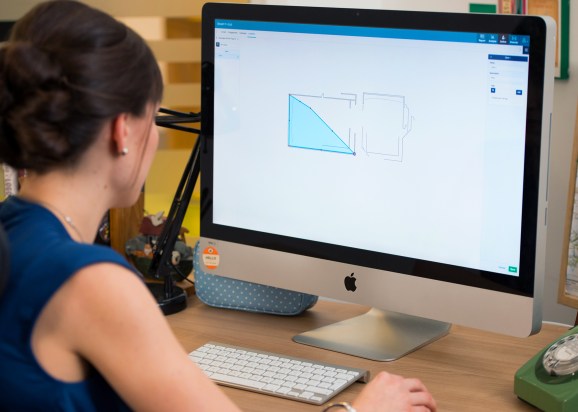 The company is calling its technology “virtual beacons,” and claiming it is the first of its kind.

But the service is not entirely virtual. It requires an AC-powered, multi-frequency beacon from any manufacturer — but not the battery-powered, low-energy Bluetooth ones commonly implemented.

That high-end beacon sits at the entrance to the store. Only one is required for an entire store regardless of size, chief product officer Joe Dalton told me. This compares to the multiple Bluetooth beacons, each guarding its own geo-located store section, that are required in a standard implementation.

While the high-end beacon does emit Bluetooth, as battery-powered ones do, it also transmits radio frequencies, which is what the SmartFocus beaconing system uses. In an ideal situation, there is also Wi-Fi in the store. GPS generally doesn’t work indoors.

Together with the magnetometer in the phone, which acts as a compass, the SmartFocus system can triangulate the customer’s position using the radio frequencies and Wi-Fi.

To set up targeted geo-locations in the store — discount coupons for customers in the cosmetics aisle, for instance, or messages about an upcoming sale to people hovering around the videogames — the store owner can draw zones on a store floor plan that she has input into SmartFocus.

Geo-targeted store sections can then quickly be redefined by redrawing boundaries on the floor plan in the software. This contrasts with standard beacon-ization, where you need to physically move a beacon to the cosmetics aisle if you want to separately define it as a geo-targeted area.

“Do I want to move beacons or redraw boxes?” Dalton asked.

If Wi-Fi is not available in the store or the magnetometer is not accessible, Dalton said the system’s geo-targeting will still work to some degree, but with a reduced resolution.

The customer also needs to have the retailer’s app installed on her phone, and he must have used it at some point to opt in so SmartFocus can gain access to his magnetometer. The app does not need to be open while he’s in the store.

In addition to easier manipulation of geozones by employing the floorplan, SmartFocus’ “virtual beacons” can also be managed through the system across stores from a central office. By contrast, standard beacon systems have local, store-by-store Bluetooth control.

But, like standard beacons, the virtual beacons’ messaging to and from the customer still needs to take place over cellular data or in-store Wi-Fi. If neither of those are available — for either SmartFocus’ virtual beacons or for standard beacon systems — no marketing communications are transmitted. In both SmartFocus’ and standard systems, the beacon’s role is only to define location.

This virtual beacon system, just coming out of beta and in full release at the beginning of next month, is one of several efforts to complement beacons’ limited technology with other options.

The U.K.-based company is introducing this virtual beacon system as part of its new Message Cloud, which brings together several of its existing marketing applications, including analytics, email marketing, website personalization, and this physical location targeting. Dalton told me that the new integration provides a streamlined management of the applications through a central dashboard.