George Orwell never realized that Big Brother — the unseen presence that watches you — would be opt-in.

Take the the release today by video ad platform Virool of its eIQ platform, which it describes as “emotional intelligence in real time.” It may well be the first of many user-watching technologies, given the number of devices with cameras.

Let’s say you come across an eIQ-enhanced video ad on the Web.

A small popup requests that you grant access to your computer camera. The company said between .5 and 3 percent of users in the beta period allowed camera access, depending on the publisher of the ad. If you decline, a regular video ad plays.

Virool tries to incentivize the user into accepting, head of business development Jason Tolkin told me, by featuring in the popup an appeal to their interest in taking “a ‘survey of sorts.”

“By allowing access,” it says, “we can see how you respond emotionally during the video playback to help us make better content in the future.”

If you accept, the ad starts — and the brand’s agency gets immediate analytics for each second of the ad about whether you were happy, sad, engaged, excited, or showed other emotions or states of mind. The camera access ends when the video clip does, according to the company. 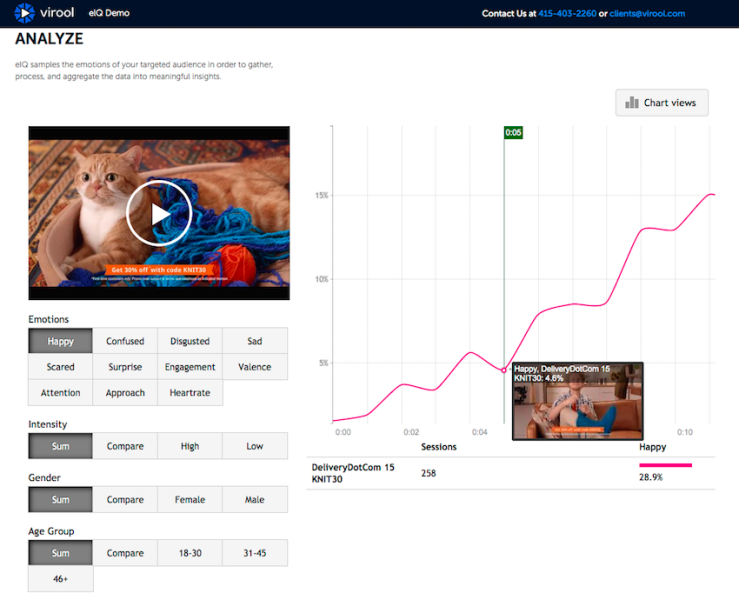 Above: An analytics screen in Virool, showing emotional responses for a group of users

“This is the first time ever when a brand can track emotional response in session,” Tolkin said. He noted that a similar kind of technology has been available in special testing sessions held by companies like Affectiva, but this is the first use in the field.

Through the computer’s camera, eIQ tracks 10,000 points on the face — including the positions of your eyes, eyebrows, and mouth — at 10 frames per second. All facial points are scored for emotional content in each frame. 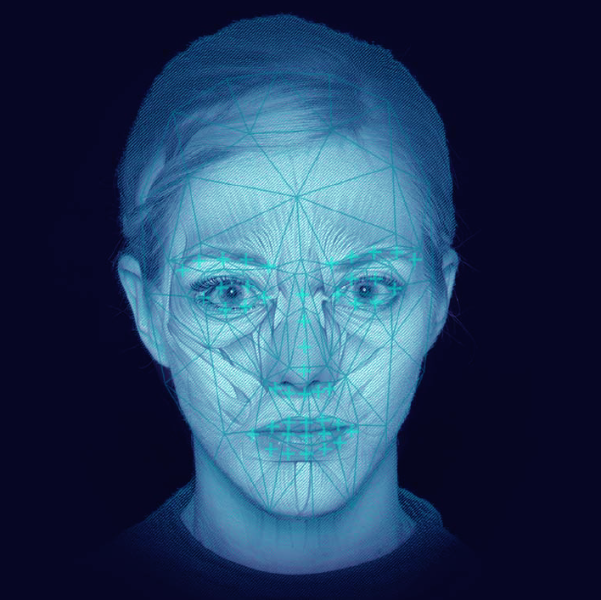 As any ad maker or politician can tell you, emotions drive decisions and engagement. Virool points out that the face is “the only place in the body where the muscles are attached to the skin,” so emotions are spontaneous and not filtered.

The facial capture is transmitted to a cloud-based Virool recognition engine “that has been trained to understand emotions in real-time,” Tolkin said, adding that the engine is getting better at its job over time.

Of course, there’s a great variety in the emotional palette of, say, Asian-Americans compared to Italian-Americans. Tolkin admitted this range exists, but said that the company’s engine is figuring it out.

It can also figure out your heart rate. It infers that all-important beat from such factors as how far away from your computer you are sitting, your attention level, and your eye movements.

The heart rate is of interest, Tolkin said, because it is “a function of seeing how excited you are.”

The San Francisco-based company has licensed the core emotional response technology from U.K.-based RealEyes and added its own analytics and the capability to deliver the player in a live Web environment.

It is also currently working on the addition of eIQ-obtained emotional segmentation to its data management platform (DMP). This means that online video advertisers will be able to target, say, everyone scanned by eIQ who gets choked up watching a Budweiser Super Bowl TV ad.

Analytics are shown in aggregate for the number of users watching a given video ad so as to present a statistical sample, but Tolkin said the capability to view an individual’s analytics is in the works. The system tracks an individual’s emotional profile, but anonymously.

Applications have been emerging over the three-month beta, in which major banking, auto, and gaming companies, and about 1,500 users, participated.

For example, Tolkin said “a big auto brand” has asked Virool to see if there are differences between East Coast and West Coast users’ emotional reactions to the same video ad.

The technology is currently designed only for computer-based Web video ads, although a mobile version is in development. It could also be used in smart TVs that have webcams, and Virool is testing applications for the Xbox Kinect.

Is there any reason the user-watching technology couldn’t be employed by, say, VentureBeat to watch how you are now emotionally responding to this story?

No, he said, but video ads — “a powerful communication medium” — are Virool’s business.