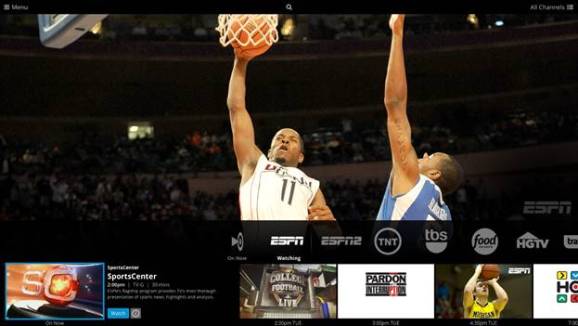 Watching live sports without cable is about to get easier

Image Credit: Microsoft
Updated at 12:15 p.m. with a correction about how to get the three-month free trial.

You can finally watch The Walking Dead live on Sunday nights without having to pay money to the flesh-eating monsters that run the cable companies.

Sling TV goes live on Xbox One today, and you get a free month-long trial if you have Microsoft’s latest console. Microsoft previously announced Sling TV was coming. The Xbox One is the first console to get the service, which enables subscribers to watch live streams of cable programs like ESPN, AMC, and more.

This adds another major feature to the Xbox One that should help it compete against the PlayStation 4. Sony is also getting a live-TV program called Vue, which it will operate itself.

While Microsoft is going with a third-party solution, it wants to ensure a positive experience. The company is promising voice and gesture controls as well as the ability to pin apps while you watch. You can also use SmartGlass as a remote control.

Pricing for Sling TV is simple. It’s $20 for a basic package and $5 for each additional package, which includes Kids Extra, Hollywood Extra, and News & Info Extra. Of course, you can skip paying that for the first month. Sling is making its programming free for the first month for Xbox One owners. If you don’t own the system already, you’ll get three free months if you buy it starting today at a Microsoft Store in the United States. This offer lasts through March 22.

“We built Sling TV with millennials in mind, and that includes gamers,” Sling TV chief executive officer Roger Lynch said on Microsoft’s blog. “Xbox has been at the forefront of gaming and technology for years, so it made sense to bring Sling TV to the passionate Xbox user. For many millennials, Xbox One is already the center of their living room experience, and we want to reach these fans to show there’s a better way to get live TV that doesn’t require a long-term commitment, high programming costs, additional wires, or hidden fees.”