SAN JOSE — Five new startups delivered pitches about the clever ways they’re using visual computing technology — like mapping your home so that you could play with virtual game characters in it, or processing and recognizing faces in a crowd in real time — at Nvidia’s big tech event today.

The companies made the presentations at the Emerging Companies Summit at Nvidia’s GPUTech conference. Nvidia gives out prizes to the best companies that make use of its graphics processing unit (GPU) computing technology, where applications use these video card brains for processing tasks outside of graphics.

“GPU computing is hot — white hot — and becoming red hot,” said Jeff Herbst, Nvidia’s vice president of business development and also today’s host. Over the years, the chipmaker has invested in numerous companies that have appeared onstage. Some, like Oculus VR, went on to big deals, as Facebook acquired that virtual reality goggle maker for $2 billion.

About 250 companies from 18 countries are presenting at the GPU Tech event. Later today, Nvidia gives away $100,000 at the Early Stage Challenge event, where 12 companies that have raised less than $1 million will compete for the top prize. At the Emerging Companies Summit, five startups presented onstage in a show-and-tell session. Nvidia is giving away $650,000 in prizes.

Among the companies were startups focused on robotics, computer vision, machine learning, big data, cloud computing, and automotive technology. Other presenters included Jibo, creator of the “world’s first family-friendly robot”; and MirriAd, which uses computer-vision based technology for mobile and TV advertising. 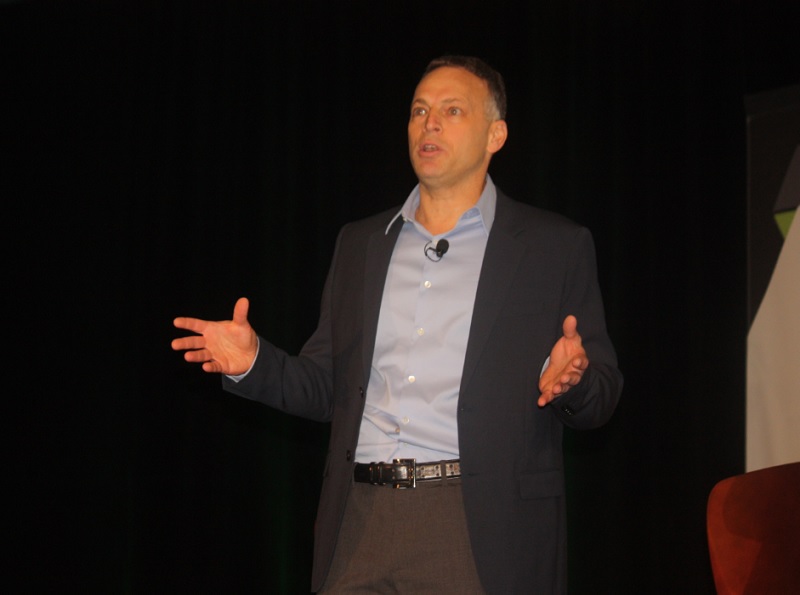 Paracosm CEO Amir Rubin was the first presenter. His startup makes software that  use a next-generation smartphone (with sensors such as the Intel RealSense camera or Google Tango) to map out your home and stitch together a 3D model of it. You can then use that model as the basis for augmented reality games or robot vision.

“You’ll be able to build an accurate model of your home, and chase around your favorite character in it,” Rubin said. “We allow machines to see the world the same way a human does.”

Herbst said he hasn’t seen many middleware companies be successful over time. Rubin acknowledged fears about being in the middle.

“We want machines to be able to see,” Rubin said. “No one thinks of Google Maps as middleware.”

One of Paracosm’s investors is iRobot, the maker of the Roomba vacuum robots. Rubin drew some laughs when he said, “My biggest fear is I will be too successful.”

Another presenter was Javier Rodriguez Saeta, the CEO of Herta Security in Spain. He showed how his software could recognize faces in camera feeds and movies in real time. It could immediately categorize faces on one side of the screen and show the faces of recognized people on the right — with no lag at all.

“This is not possible if you use only CPU systems,” Rodriguez Saeta said. “It will not be 100 percent, but at least 70 percent to 80 percent trust levels. We started this five years ago, and this was the key.”

The company spun off from a Spanish university. As for privacy, Rodriguez Saeta said Herta Security cannot control what customers do with the face-recognition technology.

“It is a challenge for us and a question for the ultimate user of the technology,” Rodriguez Saeta said.

He showed the technology working in real time on the audience. 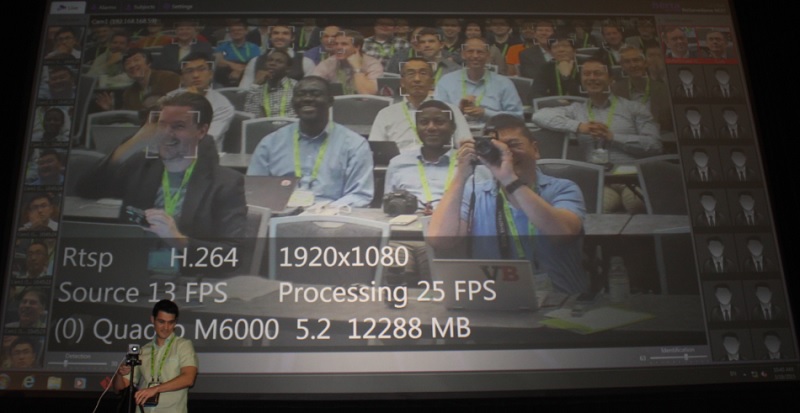 Above: Herta tech can recognize faces in real-time.

Another image-recognition startup onstage was. Clarifai. CEO Matthew Zeiler said that the company uses deep-learning, or neural network technology that learns, to analyze images and produce better search engine results. If you click on a person inside a car, the image search will present a bunch of similar photos to you. Nvidia liked the tech so much last year that Herbst invested in the company, along with Google Ventures. 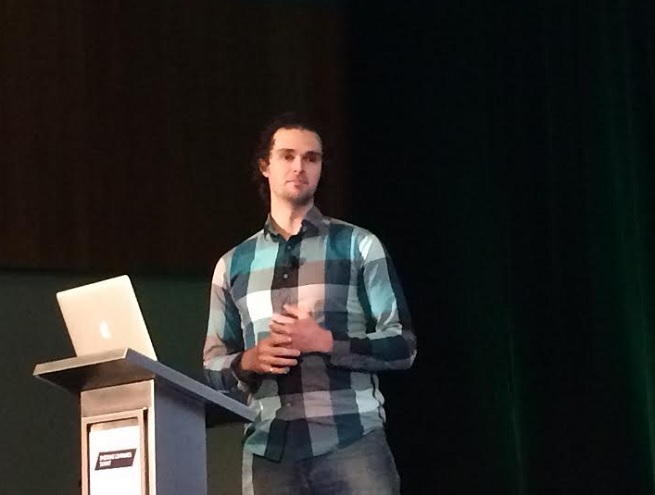 Above: Matthew Zeiler of Clarifai

Here’s the finalists in the Early Stage Challenge: