San Francisco startup Sense is launching today its web-based software for doing data science work and sharing models, reports, and even data with others.

Also today, Sense is announcing that last year it took a $1.1 million round of seed funding.

Last year I wrote about Sense, as it’s one of a few startups building systems data scientists can use to collaborate. Others include Adatao, Domino Data Lab, Plotly, and Yhat.

As more companies hire data scientists, and as companies grow their data science teams, tools that can help these people work together instead of individually could come in handy.

But data scientists still represent a small segment of the workforce. Which is why it makes sense that Tristan Zajonc, chief executive and a cofounder of Sense, wants to see Sense eventually support software engineers and business users as well.

For now, Sense can support what Zajonc calls “the trinity of data science workloads” — that is, interactive work, batch jobs, and long-running services. It’s possible to work with a slew of open-source languages and tools, including Julia, Python, R, Apache Hive, Apache Spark, Cloudera’s Impala, and the Presto query engine.

For one thing, Sense lets data scientists construct predictive models and deploy them as application programming interfaces that developers can then incorporate into applications, Zajonc told VentureBeat in an interview. Microsoft has gone there with its Azure Machine Learning tool, but Sense came first.

Parts of Sense’s user interface draw from GitHub, that popular web service for holding and collaborating on repositories of source code. Like in GitHub, you can “fork” or “star” a project. 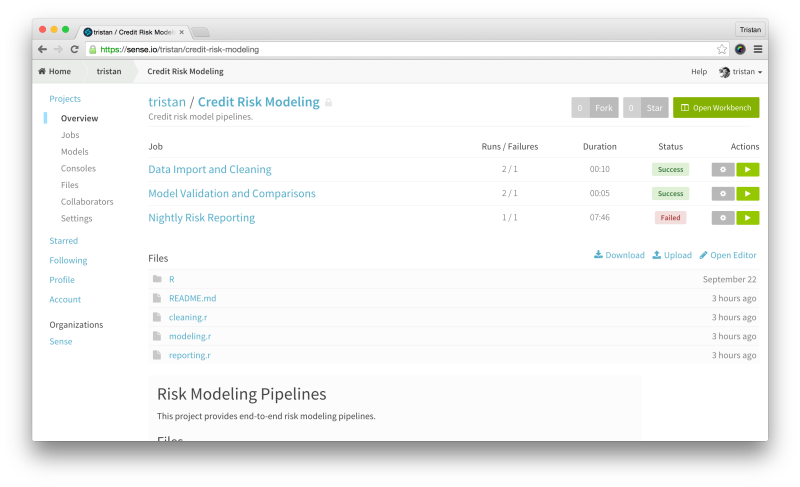 Above: A project in Sense.

But you can also open up a command line right in the browser to work with the data or code. And in a window pane next to the command line you can look at charts based on your work.

And as is the case with GitHub, you can choose to run Sense’s software on the Internet or in a corporate data center. Most of Sense’s revenue comes from the cloud-based tool now, but give it time — that could change.

The most prominent legacy provider of data software is SAS, and its software is for the most part running in companies’ existing data centers. Other tools include MathWorks’ MATLAB and Wolfram’s Mathematica.

Zajonc tells me he’s been observing a “macro shift to move away from proprietary tools. … There’s internal edicts that no new projects can use SAS.”

If that’s true, it’s significant, and it suggests that Microsoft had good timing for its acquisition of R distribution provider Revolution Analytics. And yes, it would also be good for Zajonc and his contemporaries at other startups bringing collaboration to open-source languages.

Four people work for Sense now. The headcount should increase a bit this year.