I have some catching up to do.

Dying Light is on track to become Techland‘s most successful game, and the Polish publisher has the stats to back it up. In 45 days since the launch, more than 3.2 million people have played the game. Those players have killed 378,672,587 zombies, or about 118 zombies per player.

Those figures are telling. If you multiply that by $60, you get $192 million in revenues at retail. That’s a pretty good hit in the console business, though not a runaway success.

Still, it was enough to boost Dying Light to become a top seller in United States, the United Kingdom, France, Poland, Sweden, Australia, and many other major markets. That makes it the most popular game in Techland’s history. Techland says players have used 163,435, 492 medkits, and traveled 150,955,280 kilometers. That’s what the modern age of analytics tells us.

“To celebrate the milestone, we pulled a few numbers and compared them to some real world examples to get an idea of what our fans achieved. They’ve really been a busy bunch,” said community manager Michał Napora in a statement.

Techland posted the first free content update for Dying Light with hard mode, which has new weapons, additional outfits and more to the quarantine zone. On top of that, the company reiterated its plans to actively support its hits with new maps, modes, skills, quests, and other original content. 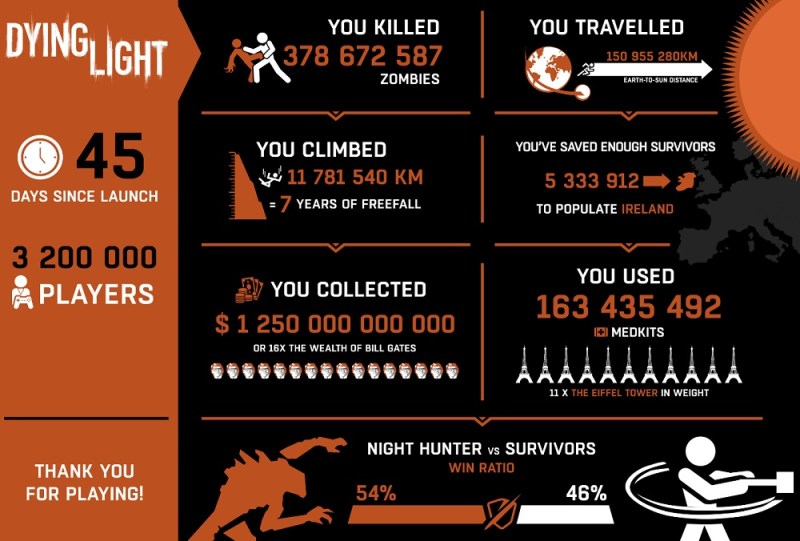